Eula Biss dedicates her 2009 essay collection Notes from No Man’s Land: American Essays to “[her] baby, who doesn’t have a name yet”; she dedicates 2014’s On Immunity: An Inoculation to “other mothers, with gratitude to mine.”  Here I mean to draw attention to an idea that we all already know: that dedications are acknowledgments of the other, before the book—whether fiction, nonfiction, poetry, whathaveyou—runs it course. They read like declarations of being for, and that implies something quite meaningful, I think: that one person’s labor and artistry can exist for others, and thus that this work exists in a continuum with life, with other people. 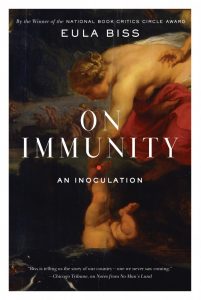 “There is some truth, now, to the idea that public health is not strictly for people like me, but it is through us, literally through our bodies, that certain public health measures are enacted.” This is Biss writing early in On Immunity about herd immunity, which essentially equates to the vaccination of a majority in protection of a minority—“the minority of the population that is particularly vulnerable to a given disease.” In all the press about Biss’s book—just Google “Eula Biss On Immunity”— there’s much said about how the book originated from Biss’s own pregnancy and deciding whether or not to immunize her son. This is also, often, how I begin to relate the “story” of On Immunity to friends and family.

But there is something deeper at work in Biss’s narrative, which she uses to unravel the cultural history of immunity through her own experiences and through the words of pediatricians, disease scientists, Susan Sontag, and Rachel Carson (among others). Biss writes with a singular persistence from, at, around, and through her status as a well-educated, financially stable white woman and mother. “People like me” isn’t a droll invocation of empathy, of generalization; it’s Biss’s extreme precision in placing herself, and those who share her demographic characteristics, on a continuum with those who do not. It’s not even so much a placing as it is a recognizing, and abiding-by: we are human, we all contain sickness and health, we share airplanes and blood drive queues. One of my favorite passages of Biss’s book takes place in one of these queues; Biss is giving blood “to repay the loan [she] was given,” upon her giving birth, “by some other anonymous donor.” She writes:

“I try to imagine that donor now as I look at the people in the chairs across from me—a muscular man studying flash cards and a middle-aged woman reading a novel and a man in a business suit looking at his phone. They are the same people I might see waiting for the train, but here they are bathed in an aura of altruism.”

It may be that circumstances like giving blood—or receiving yearly vaccinations— illuminate why we do so in the first place. We give, and receive, in order to become part of a majority in protection of a minority, and how conveniently visceral this experience is:

“When the needles are inserted into the people across from me, I notice each of their faces twist, for just an instant, into a grimace. I dread giving blood, and because I have been sitting here imagining these others are more willing to give than myself, it is surprising to see this look flash across their faces. As the nurse pushes the needles into my arm, I feel my face make the same expression. I, too, dislike it.”

I think, here, about the Terence quotation, which was brought up at the “Apartness” poetry event last week: I am human: nothing human is alien to me. I think, as a writer, about the commonly held notion that writing is birthed from alienation, from a need to reconcile the self with that which feels un-self-like. I think of a recent tweet from a conference on women writers in New York, in which The Empathy Exams author Leslie Jamison is quoted as saying, “All writing is about empathy.”

These may feel like grand-gesture ideas; even, perhaps, like didactic throughlines. Besides, my body is separate from your body, and I am too busy trying to figure out how to avoid your cough so that you do not infect me.

Yet we play host for weakened disease so that we may not catch it in full; we give blood, literally indebted to those who did the same for us. Eula Biss: “Our bodies are not war machines that attack everything foreign and unfamiliar…but gardens where, under the right conditions, we live in balance with many other organisms. In the garden of the body, we look inward and find not self, but other.”

Next month, Eula Biss visits Duke as part of the inaugural Kenan-Center for Documentary Studies Visiting Writers Series in Ethics, Society, and Documentary Art. In the spring, Leslie Jamison visits.

As it happens, Jamison has that same Terence quotation tattooed across her arm. She wrote a short piece about it in The New York Times. “It hurt just enough to make me feel like something was happening,” she says about the tattooing process. “There was a sense of deserving—that I’d earned this by hurting for it. It was an old logic I hadn’t felt in a while: Pain justifies ownership.” Perhaps, also, it reinstates collectivity; it brings us into one body; it molds our faces into the same contorted expressions; it makes us visible to one another as we board the trains together.