Entitled “There Are Better Ways To Fight Poverty Than Giving Money To Corporations,” the article describes how, in turning charity into consumption through campaigns such as Red Nose Day, “corporations and nonprofits distract from how the current unequal global economic system contributes to the very challenges these campaigns aim to address.” How well-meaning individuals are drawn to these campaigns offering “low-cost heroism” was also addressed by Richey in her talk at the April 12th panel discussion “Commodifying Compassion,” held at KIE.

Lisa Ann Richey is a Visiting Professor at the Kenan Institute for Ethics and Professor of International Development Studies and Director of the Doctoral School of Social Sciences and Business at Roskilde University in Denmark. She served as founding Vice-President of the Global South Caucus, and Advisory Board Member of the Global Health Section, of the International Studies Association (ISA).

The Duke Human Rights Center at the Kenan Institute for Ethics is again running the Pathways of Change program this summer. Students interested in the areas of business and human rights, women’s rights, and environmental justice are matched with internships with partner organizations working for social change across these fields, including Corporate Accountability, Feminist Majority Foundation, and NC Conservation Network. Together they explore the trade-offs between different approaches towards social change.

Sydney Speizman (’17) summarized the positive impact that her internship had on her: “The Pathways of Change program opened my eyes to the complex web of stakeholders and strategies involved in protecting human rights and the environment as the economy becomes increasingly globalized…[it] provided me with both deeper insight into how international development projects can better support the communities they aim to help, and valuable work experience that will undoubtedly shape my future career path.”

In addition to working for 8-10 weeks, Pathways of Change students conduct profiles of the people in their organizations and write “letters home” about the best ways to effect change in human rights practices.

Meet the 2018 Pathways of Change Interns!

Learn more about the program.

Join Slate magazine’s Critic-at-Large Stephen Metcalf to talk about how culture shapes society and vice-versa, how neoliberalism led to the Trump presidency and the role and responsibility of journalists in the age of Trump. Have lunch with him to get a different and involved perspective!

Stephen Metcalf attended Phillips Exeter Academy but, “three weeks shy of graduation, was asked by the school administration, in no uncertain terms, to leave.” He then matriculated at Wesleyan University, later earning a master’s degree from the University of Virginia. After spending some time working on a Ph.D. in the English graduate program at Yale University, he moved to New York City where he worked as a speechwriter for Hillary Clinton, during her first Senate campaign, and a freelance writer. Subsequently, he joined Slate as a staff writer, where he writes the magazine’s Dilettante column and serves as host of the magazine’s culture podcast.

Do Lunch is a series of informal lunch discussions, exclusively for currently enrolled Duke undergraduate students, featuring ethical leaders outside of Duke and their decision-making processes.

This week’s NFL protests are part of a long tradition of athletic dissent.  In a timely talk on human rights, dissent and the Muslim athlete, Zareena Grewal, associate professor of American studies and religious studies at Yale University, explored the meaning of Mahmoud Abdul-Rauf’s (formerly Chris Jackson’s) decision in the 1990s to remain off-court rather than stand during the pre-game national anthem—a decision that ultimately resulted his suspension from the NBA. She compared Rauf’s journey of civil disobedience to the deep antagonism faced by former heavy weight boxing champion, Muhammed Ali in the 1960s for his comments on Vietnam and race.  Grewal also drew comparisons to the current controversy and national debate inspired by Colin Kaepernick. This talk was the first in a year-long series, American Muslims, Civil and Human Rights, co-sponsored by the Duke Human Rights Center at Kenan Institute for Ethics and the Duke Islamic Studies Center. The next event will be on 10/11, with Khaled Beydoun, presenting Policing Muslim Identity During the Time of Trump. 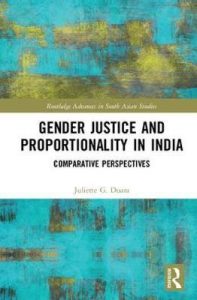 The Duke Human Rights Center at the Kenan Institute for Ethics invites you to celebrate the recent publication of Juliette Duara’s book: Gender Justice and Proportionality in India. Comments by Professor Katharine Bartlett, and reception to follow.

Two-page proposals should detail a new research project the fellow plans to pursue over the coming year. Proposals should also provide a timeline of activity, expected year end outcomes and a budget.

Faculty fellows will receive $7,500 each. Funds can be used for research expenses, to support research assistants, or for summer salary or course buyout. Fellows must be in residence throughout the academic year, are expected to participate in DHRC@KIE events and, where appropriate, provide intellectual leadership for the Center. Work may be collaborative or independent.

Preference is for fellows whose research focuses on international institutions, business and human rights, women’s rights or forced migration.

Proposals can be sent to kie@duke.edu and are due at noon May 8. Awards will be announced by May 12.