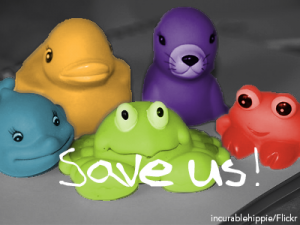 When you open newly bought Halloween decorations, the last thing you expect to find between two headstones is a cry for help from Chinese labor camp workers across the world. That is exactly what happened to one US shopper at a K-Mart in Oregon. This woman was shocked at the explicit message inscribed in a letter inside the box she purchased.

Normally, when we buy items at a store, there is no indication of how, where, and under what conditions the product was made. Some of us may not care how products are made, but even for those who do want to be ethical consumers, it can be difficult to do so. This may be for a number of reasons including the higher cost of ethically made goods, the cynicism that we cannot make a difference, and the lack of information available to us. Shana Starobin’s Good Question, “What should we eat?” gives excellent insight into the challenges that consumers face in being aware and capable of eating, or shopping, ethically.

Imagine if every product came with a letter similar to this one, detailing the ethical or unethical practices that went into making the product. The letter, if found to be legitimate, certainly details worrisome labor practices in China. The note reads:  “People who work here have to work 15 hours a day without Saturday, Sunday break and any holidays. Otherwise, they will suffer (punishment), beat and rude remark. Nearly no payment (10 yuan/1 month).” There was also a desperate plea for readers to pass the letter onto the World Human Rights Organization. Although this is not a real organization, the shopper passed the letter onto the U.S. Immigration and Customs Enforcement agency, which is currently investigating the case.

What obligations does the shopper now have? Will she and should she stop purchasing these products?

For the next few months, she may check regularly to see what country and conditions different products are made in. Yet, she will quickly realize that much of this information is hard to find. Unlike medicines and tobacco products, our everyday purchases do not come with warning labels telling us the dangers created by the products themselves. Imagine what the world might look like, if this was not the case. You might stop yourself from buying Chris Brown CD’s if it had a label that read “WARNING: Do not buy this album! This man beats women.”

In the modern global market, goods are typically assembled in multiple countries with differing laws. Global corporations do not have any legal obligation to detail their labor practices to the public, nor do most people take the time to investigate for themselves. Given this information asymmetry, we often continue to make purchases without second thought of what effect they may be having for laborers in other parts of the world.

Even if this incident opens our eyes to unethical practices, will it change the way consumers and corporations act? If US consumers resolve to boycott products made in China (which would be nearly impossible), we will just be purchasing alternatives manufactured by sweatshops in India, Indonesia, or the Philippines. There may not be better alternatives. Furthermore, a boycott of Chinese goods could complicate global markets, harming American and Chinese laborers.

Maybe consumer boycotts are actually ineffective in the larger scheme of things, and it is better for us to pressure governments and advocate for change that way.  Or maybe the reason the laborers wrote to this woman, is because they know that consumers can do something to change the situation. As everyday shoppers, we may not know how to influence macroeconomic and government policies, but our consumer purchasing power may be our way to make a difference.

If I buy products made from Chinese sweatshops, does that not make me at least somewhat responsible for the state that these laborers are in? It is much easier to convince ourselves that these issues are out of our control, but I wonder if they are actually entirely determined by what our hands put into our shopping carts.

What do you think our responsibility as consumers is and how should we respond to this plea for help? 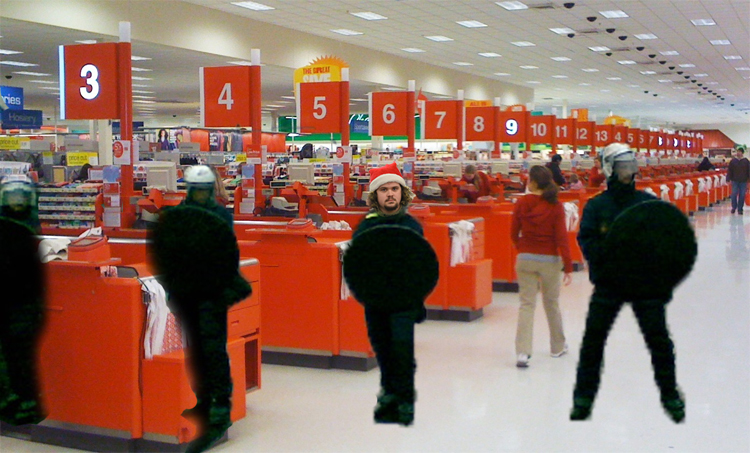 It’s undeniable: here in America, we take our shopping seriously. Even in the face of the most serious economic recession in decades, people still love shopping for anything they can, or even can’t, afford. In fact, “love” might not really begin to fully explain the obsessive-compulsive relationship many American consumers have with their favorite brands, product lines and gadgets. This kind of overzealous customer loyalty can lead to restless, pushy, and sometimes even violent crowds.

It is not surprising that as part of the kick-off to the holiday season, the oh-so-American passion for gluttony, self-indulgence and vigorous over-spending expands not just in the kitchen but in the wallet and out into the public sphere. The incident from this past Black Friday demonstrates just how willing some consumers are to do whatever it takes to purchase what they want. The key word here, of course, is “some.” To what extent are these somewhat isolated incidents whose frequency are nevertheless marginally increasing representative of shifting consumer behavior norms in America? What approach can be taken to handle these incidents in trying to identify the line between healthy consumer competition and dangerous shopping situations?

Sure, it might seem like an extreme example, and it is. But every year during major holiday sales, special releases and limited-time-only events you’ll find a throng of people waiting anxiously to be the first to see, try, or buy insert-cool-new-item-here. And when this cool-new-item has limited availability, some consumers seemingly will do whatever it takes to get their hands on it. You’ve heard about competitive marketing. Enter competitive consumerism.

An incident late last week in Orlando, Florida served as a prime example of customers anticipating the midnight release of a new, limited edition Nike shoe shortly before the commencement of the NBA All-Star weekend festivities. What was even more surprising than the actual customers themselves – who reportedly ran across a parking lot to be closer to the actual store after being contained across the street by police – was the immediate and somewhat overdone, though perhaps well-meaning, response of the entire police force of Orlando. When all was said and done, more than 100 police officers dressed in riot gear, on motorcycles and horses, as well as a helicopter, rushed to the scene to diffuse the situation.

On one hand, given some of the more violent shopping events that have occurred in the past calendar year, such as the Air Jordan release, it’s understandable that security forces in Orlando would be determined to prevent serious injuries or disturbances outside the Nike store on Friday. However, one must consider how necessary the deployment of such an intense number of police officers and resources was really necessary for a crowd (whose size is currently undisclosed) just eager to buy some cool kicks. As a major city, surely Orlando needs the services and protection of its police in much more serious situations in the wee hours of a Friday? Though consumer behavior trends are in some ways cause for more and more concern, what could half of those police officers been doing, or helping with, or maybe even saving or preventing, if they weren’t all dressed up in riot gear outside a shoe store? What dangers were left to permeate the streets of Orlando while a large police force dallied with a group of shoppers?

To be sure, the potential for serious violence in shopping situations exists and has been demonstrated many times, and a town or a city, or even a government, has a responsibility to its people to regulate such situations to be as safe as possible. But at what price? Couldn’t the time and resources allocated to this one instance of Nike fan anticipation have been better directed towards any of the other more serious problems Orlando faces, like crime, homelessness, and violence?

So, yes, the behavior of American consumers sometimes can seem out of hand, uncalled for, irresponsible, and even dangerous. But what’s just as important to consider is the quality of the response of officials in their ability to effectively regulate and control these situations. A thoughtful discussion can easily be had about American priorities and the appropriateness or rationality of certain shopping behaviors. What people aren’t really talking about, though, is what role security officials can play in alleviating these situations, what they’re not doing well, and what more they can do to respond to shopping conflicts in a way to maximize functionality and success while maintaining security to an appropriate scale. In the end, how can we define some healthy consumer competition that’s good for our economy, and behavior that warrants strict, even forceful responses from security and police personnel?