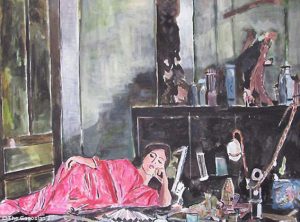 Recently, I’ve read numerous reports of artists who have offended their fans and contemporaries with arguably the most heinous crime an artist can commit. Usher, Bob Dylan, and Beyoncé have all been called plagiarists.

The New York Times reports that critics have noted that some of Bob Dylan’s paintings in New York’s Gagosian Gallery seem to bear striking resemblances to others’ photographs. Take a look at his work, “Opium” above and Leon Busy’s “Woman Smoking Opium.”

Usher is contesting claims that his 2004 hit “Burn” gained a bit too much of its influence from songwriter Eric Lee Straughter’s “The Reasons Why.” My apparently musically underdeveloped ears could not sense significant similarities between the two songs, but Usher may have to testify before a jury to defend his originality.

Similarities between Beyoncé’s choreography in her new video for “Countdown” and choreography by Belgian Anne Teresa De Keersmaeker are more obvious. See a side-by-side comparison after the jump. END_OF_DOCUMENT_TOKEN_TO_BE_REPLACED