Ellerbe Creek is a body of water that runs through downtown Durham. Meaning: it runs through our city and contains our muck. “Think of all the medicines people take and then flush down the toilet,” the tour guide implores. “I wouldn’t let my kids swim in here. Fecal coliform.”

The water looks mucky indeed: clay-colored, churning fast, loopy with oily bubbles. It feeds into Falls Lake, which is not a natural lake. Its non-naturalness frustrated, and continues to frustrate, nearby residents; their land was taken and dug and filled with water, yes, but also mosquitoes and pollution. 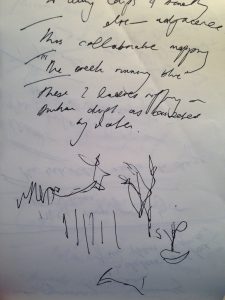 The tour of the Glennstone Nature Preserve turns out to be as much about the surrounding forest—its canopies, its rose-hips and big-bodied black snakes, its spray-painted neon orange, marking where public land stops and Army Corps land begins—as about the water itself. (Where did my body end and the crystal and white world begin?). It is also, perhaps equally, about the history of Durham development, filtered through two Ellerbe Creek Watershed Association tour guides. They’ve lived in Durham long enough to have conversations with people who worked in Erwin Mill when it was an actual mill. Blue jean indigo used to run into the creek.

I scribbled that in my notebook the other day—the creek running blue—because I liked the image (forget the pollution!). But my assignment, assigned on the creekbank, was to write about something I’d noticed on the trail, and to describe it in formal, third-person detail. This was—is—hard for me. I wanted to write about the two women tour guides, how they gave our group a collaborative map of Ellerbe Creek by finishing each other’s sentences. How their excitement about stump sprouts excited me. How the leaves looked next to the mushroom fairy rings. I wanted to understand the forest, the creek, and the developed land holistically: one thing, albeit nuanced, but one thing. I wanna be cohesive!, as the fictional Hushpuppy moans in Beasts of the Southern Wild.

In other words, I wanted to position myself at the center of the ecosystem: me, writing about my surroundings. Which is funny, because I’d just dropped in on this trail on this day through a writing class I’m taking. And as I told one of the guides, I’d lived here my whole life, but never traversed the banks of Ellerbe. 23 years is a lot of time for a city to transform: livelihoods can revert, invert, take different shape. So can creekbeds and the creeks they carry.

It’s a lot to ask to understand the before, during, and after—of a place, a person, a story. On this day, September 11, I read a Facebook remembrance post by a friend. She wrote about those of us who have little memory of what came “before” that date. I was in fifth-grade; I’ve recounted “my” story a million times (it was sunny out; I was confused about how something bad could be happening in the world if it was sunny out). But it was vaguely kid-stuff before, and adolescence after. 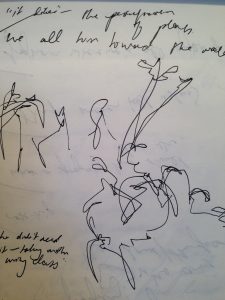 I start to wonder: is that before memory within my control? What about the during, and after? I asked one of the tour guides if an investigative article had ever been written about Ellerbe, considering the creek exists within plain sight of Durham’s residents. “No,” she said, after asking her tour partner. “Maybe you should write it!” I fantasized my potential agency: I write a luxurious, sprawling journalistic account of the creek’s history, and suddenly more people care. It’s the same fantasy that flickers sometimes about my project in Dublin this summer: if I write a good piece about the multiple dimensions of The Exchange’s suspension, maybe more people will care that it happened at all, or at least want to understand the situation more deeply. Maybe they’ll want to understand each other more deeply.

In this current, there’s an ethics of control, and there’s an ethics of empathy, and I want to be able to cite enough philosophers and enough theorists to cover every inch of nuance of both. I’m not sure that project is within my control, nor am I sure it should be. Inevitably, it will revert, invert, take different shape.

This morning, feeling weight from the day and from the idea of writing, I walked outside our building and sat at a picnic table and watched a ball of fluff float until my eyes strained or the ball became indistinguishable from the color of the sky or both. I sat there for a few minutes and then walked back. My legs lately feel taut and Tinman-like. (I just started dancing again after a few months’ break. “I’m a little rickety,” I keep telling people. I also walked about 1.6 miles through the woods yesterday).

I came inside and opened The Chronicle; there was a 9/11 Remembrance advertisement on one page, and a giant Miró painting on the other. I came back to my desk, and Ikea USA had tweeted, “Save time for reflection this Patriot Day morning.” (The account has since deleted the tweet). I felt strange about that (who decided it was called “Patriot Day,” anyway?), so I started writing my way into and out of it—that current, that stream—controlling only as much as the words ahead of me.