Sure Wyoming, go ahead. I dare you. Buy an aircraft carrier. 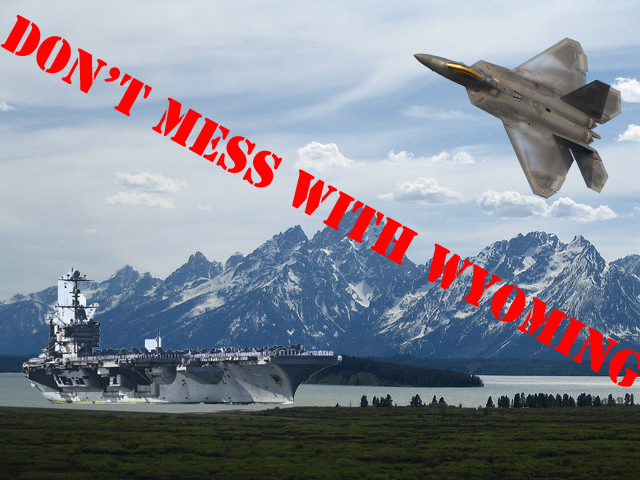 Oh, Wyoming. Comical in so many ways. Its squarish little shape, its hilariously small population, its desire to own (or at least maybe use) aircraft carriers… WHAT? That’s right. Wyoming, a landlocked state with no international borders that is 0.07% water by area, wants to have aircraft carriers.

Well, you know, if the government can’t defend Wyoming, then maybe Wyoming should be able to defend itself. Makes sense, I suppose (apart from the fact that Wyoming has a national guard to do exactly that). And that’s why a bill was introduced to the Wyoming state legislature to create a task force designed to figure out what to do with Wyoming should some type of disaster should strike. But why was this amendment (scroll to the very bottom) added? It states: “Conditions under which the state of Wyoming should implement a draft, raise a standing army, marine corps, navy and air force and acquire strike aircraft and an aircraft carrier.” In what conditions would the state of Wyoming possibly need a navy and an aircraft carrier?

To me, this raises the question of whether or not Wyoming should spend public monies on trying to create contingency plans for clearly impossible (or certainly exceedingly rare) events. Could Wyoming be faced with a scenario in the next fifty years where it is suddenly surrounded by water? Yes. Will they? I can say with relative certainty that they will not. But one could say, ‘Perhaps Wyoming needs an aircraft carrier in the Pacific Ocean to defend itself, should the United States completely disband.” Again, this could happen. But contrary to what I have seen in numerous, highly detailed and accurate Hollywood productions, I don’t believe this will happen anytime soon. So why isn’t Wyoming occupying its time focusing on fixing more relevant issues, like the fact that it sits on a giant volcano? As far as I can tell, aircraft carriers don’t work well in lava.

It is ludicrous to consider these ideas, let alone ask to be paid to do so. But the real danger here is that in creating plans to avert rare doomsday events, we have effectively bought into the fear that 9/11, unrest in the Middle East, and terrorist groups (and underwear bombers) attempted to create. The government and the citizens of this country have changed the way we feel and value our own security, enabling the cause of terrorists. They have inspired fear in our minds, provoking us to spend money to defend ourselves from non-existent threats. It’s debatable whether or not the United States is safer than it was 15 years ago, but do we need to have tanks in moderately large metropolitan areas? Probably not.

Governments (and citizens) need to do a better job of finding credible threats and creating non-invasive methods of tackling those threats. And to be honest, we have in some ways started down this path. Take homeland security’s Terror Alert program, which for the better part of the past decade has dutifully informed American travelers in airports that the country was on ‘high alert’. How can a country possibly be on high alert for a solid eight years, and not even shift when actual terrorist events occur?  Thankfully, a new initiative which only places short term alerts when they are credible has been put in place. This is a perfect example of how we can respond more actively and effectively to curb threats without creating apathetic or panicked citizens.

Does it make sense for Wyoming to spend $18,000 on a disaster contingency plan? Absolutely. But it makes no sense for them to even consider aircraft carriers. Get over it Wyoming. It’s not happening.