Succeed or Drown: The mindset of the typical Duke student 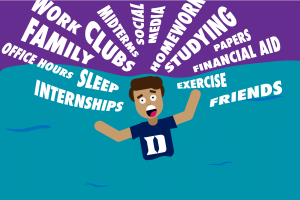 As Duke students, failure is not something we like to share. When we get a bad grade on a test or get rejected from an organization, we tend to keep these losses to ourselves. At the same time, we have the bad habit of minimizing our successes. We don’t give ourselves enough credit for how far we have come and what we have already accomplished.

At it’s core, Duke culture convinces us to hide our failures and bury the associated feelings, and simultaneously tells us that our successes are mere drops in the bucket. Both of these tendencies reinforce each other and lead us into a death spiral. With midterm season in full swing, we can all agree that the first adjective we would use to describe ourselves is stressed. At this point, stress has become part of our personalities and we don’t know how to function if we are not constantly occupying ourselves. Stress in and of itself may not be a bad thing, since it drives us to meet goals and work with intention, but the effects of stress can be very damaging.

Depression and anxiety, notably psychological effects of extreme stress, have been on the rise among college students for years and Duke is no exception. But a recent survey found that Duke students’ stress levels are higher than the national average. This may be in part due to the “academic rigor” of an institution like Duke, but it may also result from the expectations we place upon ourselves to succeed.

We may be humble enough to avoid bragging about grades and acceptance letters, but as Duke students, we love to brag about how much stress we put ourselves through. It is common to hear peers exclaim that that they haven’t slept in 3 days, or they spent the past 45.5 hours nonstop-studying for their physics midterm. We’ve normalized and even begun to praise these behaviors while simultaneously stigmatizing failure. If your friend Chris didn’t score as well on a test as he had wanted, surely it was because he didn’t spend enough time studying. But maybe Chris was having a tough week and found it hard to concentrate, so instead he spent a day off campus, putting him behind in his work. As Chris’s friend, you may think to yourself, well we’ve all been stressed recently and I just powered through the last 2 days in Perkins, he should’ve done the same. With this mindset, we stigmatize and ignore the importance of self-care, which is a catchall term for just simply taking care of yourself.

When did getting an A on a midterm become more important than sleeping, eating, exercising, and being happy? A good grade may make you happy in the short term, but as soon as that feeling of ecstasy wears off, you’re striving for your next A. Before you know it, you’ve spent 3 years in college memorizing facts and figures, living your life in the library, but without having learned anything about yourself or your passions. You’ve spent 3 years pushing yourself harder and harder until you realize you haven’t fully lived and your mental and physical health has been in constant decline.

Ok so maybe that’s the worst case scenario. But it isn’t unheard of to fall down this very narrow and deep rabbit hole for at least part of your time at Duke. Many of us have every activity nailed to the minute in our schedule, myself included. I even have social events and meetings with friends penciled in. Before I know it, I have no free time to do things that I enjoy. I never schedule in time to meditate, read a book, eat off campus, or watch Netflix. At the end of the week, I’m mentally and physically exhausted to the point at which I spend all weekend catching up on sleep and completely unproductive.

But what can we do to avoid falling into this trap? Well first, we can prioritize self care. We can engage in activities that fulfill and calm us, and put grades and job applications second (that’s right, second!). We can encourage our overwhelmed peers to do the same and stop glorifying the stress we put ourselves through. And thirdly, we can be open and honest about our failures and shortcomings with our friends. There are also a variety of on-campus resources available to students like CAPS, the Women’s Center, and Peer for You. By doing this, we can create a campus environment where we are not afraid to share our imperfections and build a community that cares just as much about each other as it does success. Just imagine what that Duke campus would look like.