As a good student growing up in Delhi, India, Sanjeev Dasgupta was expected to take mostly courses in STEM fields. However, “by graduation, I realized I hated all of that,” he says. His search for meaningful study and work has taken him to at least five countries so far. In the process, he has discovered a passion for addressing the causes and consequences of human displacement, and his time at Duke is poising him to make an impact after graduation.

Sanjeev came to Duke broadly interested in peace and conflict studies, but summer experiences in Serbia for DukeEngage narrowed his focus. He was in Serbia as an escalation of a major migration crisis across Europe was taking place. As Hungary closed its borders to migrants, thousands in Serbia became stuck in a place in which they neither expected nor wanted to stay. “I had been studying conflict resolution and human rights at a meta level,” Sanjeev notes, “but my Serbia experience drove home how policy impacts people on the ground.”

Since then, addressing the problems of displacement has become the common thread in Sanjeev’s studies and work. Wanting to make sense of the often-uncertain scenes he had witnessed in Serbia, he joined DukeImmerse: Deconstructing/Reconstructing the Refugee Experience the following spring. Through interdisciplinary coursework and field research in Jordan, he began to appreciate the depth of policy challenges as well as the way those manifest in the individual experiences of refugees. 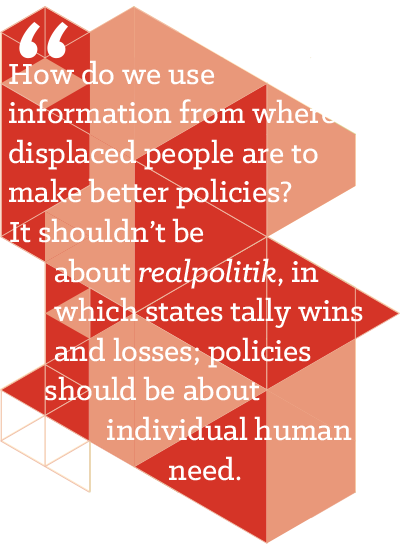 A summer internship in rural India with the UN Development Programme gave him firsthand experience with other causes of displacement. Many of the migrants he was working with had moved in response to drought in their home regions, not conflict or persecution. Nevertheless, many elements of their experiences mirrored those of people he had met in Serbia and Jordan. “In some ways, displacement issues are universal,” he says. Families are separated; livelihoods are lost; governments struggle to address the causes of displacement.

In the spring of 2017, Sanjeev took a semester off from classes in order to work as an intern at the headquarters of the UN High Commissioner for Refugees (UNHCR) in Geneva. His time in Switzerland is a window into a possible future career for him. While he believes in the mission of the UNHCR and its dedicated staff, the distance between headquarters and the UNHCR’s field operations strikes him as profound. He would like to connect the key decision-makers in Geneva better with the lived experiences of refugees around the world. “It’s really difficult for the top to know how things work at the bottom,” he says, “Information is necessarily mediated.”

At Duke, Sanjeev will continue to research refugee and displacement issues through the Kenan Refugee Project, in which he is an active participant. Sanjeev is dedicated to making information about refugees more accessible and holistic. Combining refugees’ own stories with critical data is perhaps one way to bridge the top-bottom divide Sanjeev has seen repeatedly.

After Duke, Sanjeev expects to continue working on refugee and displacement issues. He eventually hopes to help make better policies for displaced people. “How do we use information from where displaced people are to make better policies?” he asks. “It shouldn’t be about realpolitik, in which states tally wins and losses; policies should be about individual human need.” He expects answering that question will involve graduate or perhaps law school. He has another couple of semesters to hone the best path for him.