From an early age, Catherine Ward knew she loved stories and meeting new people. The more she knew about a different culture, the more excited she became. Growing up near the North Carolina coast in New Bern, Catherine was very aware of the social barriers that kept people apart. She felt confined by the often-rigid social hierarchy in her small city. When she was accepted to attend boarding school in Winston-Salem, North Carolina, her world got bigger. Her new city was nearly eight times larger, and almost one quarter of her peers were from other countries.

At a school with a more diverse student body, Catherine realized how much she enjoyed cultural exchange. Many of her friendships and extracurricular focuses connected with international students. For as much as Catherine’s roots ran deep in North Carolina, her focus continually stretched outward.

“Communities are most meaningful to me when shaped by uncontrived diverse backgrounds,” she says. “Living together in our dorm building, my high school friends would teach me conversational language snippets, ask questions about my American background, or answer my questions about their cultural backgrounds, sparking my desire to further research other cultures.” 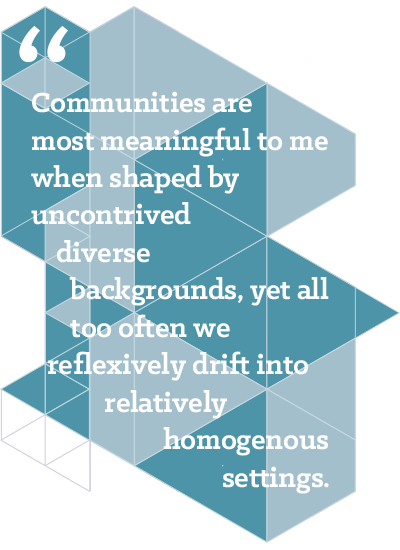 At Duke, her interests converged while working to integrate refugees as part of DukeEngage Dublin. Spending a summer abroad, Catherine was invigorated by working to bridge the divide between migrants, refugees, and more established residents of Dublin.

Once back stateside, she participated in Citizenship Lab, an academic coaching program supporting refugee youth, and her experiences with international students and refugee youth further coalesced. She saw that the experiences of marginalized groups were not regionally isolated; the issues she witnessed in her home state connected to worldwide patterns of discrimination. Moreover, as she experienced increasingly diverse communities, she became more at home—and more focused on the common threads she saw.

Catherine’s love of stories and connections led her to an English major, where she has focused on narratives of the marginalized and oppressed. “I believe in the power of language. Literature exists intemporally and interspatially, granting a greater understanding of the human psyche.“ She thinks her insight into narrative and humanistic experience gives her an unusual lens on human rights.

At the start of her junior year, Catherine began to reevaluate the path she had set out for herself. She was accepted into the Kenan Purpose Program and spent the fall semester discussing questions of life significance with her peers in the gateway seminar. She has realized that her concerns are global, not just local, and she is most energized when working to make diverse populations more so. For now, she believes her path calls her to law school and international humanitarian work. “As I am so constantly drawn to these topics of equality, human decency, and international justice, pursuing human rights work connected to migration and youth issues makes sense to me.”