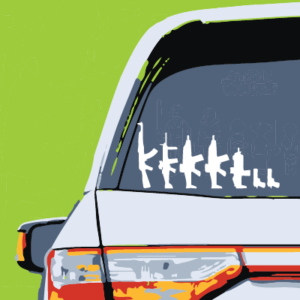 When I was ten years old my grandfather took me to the range for the first time. He told me I’d pick it up quick, but after six rounds of skeet shooting I must’ve only hit a single disc and, even though he cut the stock about six inches below the factory recommended minimum length to accommodate for how scrimpy his grandson was, my shoulder was blue and black for a week. Nonetheless, it was intoxicating and I’ve loved going to shooting ranges ever since.

This was long before I knew anything about the political divide in our country, or that the issues surrounding guns widen that gap every day. Long before the year of 24/7 Fox News leading up to the 2016 election or the countless, tense dinnertime discussions with my mom about our radically different political views. But, I digress. The election ended, I am off in college now, and what little time I spend with my mom I very intentionally avoid any conversations that could spoil the moment. Seems simple enough, right?

It really was simple, at first. My mom’s house is a twenty minute drive from campus and I see her once or so a month for dinner and generally there is so much to talk about that we don’t have time to argue about the latest Trump tweets. But then, starting at thanksgiving, a new gun would appear on the dinner table every time I visited. It started with two pistols. An AR. A shotgun. Another AR. Another pistol. Yet another AR. At this point you probably have a pretty good idea of what issue this post is trying to tackle: “how do you deal with the people you love sharing none of your views???”. Well, no, not exactly. The problem is how much I like the guns.

When I go to the range I get the same giddy feelings that I had when I was ten: I still love shooting. Now, I am by no means a “gun nut”, nor do I think that owning guns is necessary, but it’s significantly harder to tell my mom that I think it’s unnecessary when she knows how much I like them. This is complicated even further by the fact that every person I meet at the range is respectful, kind, and, above all, concerned about safety. No backwoods hillbillies who have guns to “protect themselves” and to piss off liberals, just normal people who enjoy a different kind of sport.

Now, one school shooting was enough for me to say “Okay, there needs to be greater regulations on the purchasing of firearms”. It’s unfathomable that, nine weeks into 2018, we are already at twelve school shootings and that thought hasn’t occurred to every single person in this country. I, like most, don’t know how to move forward. But I have an idea of how we can avoid moving backwards. I’m sure you’ve heard it before, but we need it now more than ever. It’s simple, and applies to nearly every polarizing, politicized issue in this country: stop demonizing the people on the other side. At the end of the day, they are just that: people. No one should be screaming at the people clinging onto their guns for dear life, or berating the people trying to take away your precious firearms: as sappy as it sounds, we need to meet somewhere in the middle and analyze not how this is affecting Democrats and Republicans, but how this is affecting the people and children of the United States.