Some Things Should be Censored 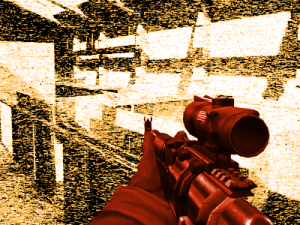 Months ago, the violent shooting at The Sandy Hook Elementary School in Newtown, Connecticut stunned the nation. Since then, debates have resurfaced regarding the role of guns, videogames and the media in creating violence in American society.

As people continue to process the events that occurred in their own ways, one gamer has chosen an extreme method to do this. A gamer going by the handle Gizmo01942 created a videogame in which users can shoot the leaders of the NRA. Fox News aired a story on the game and its implications.  Even more appalling, Gizmo01942 is now making another game called “Class Warfare” in which the user plays as Adam Lanza and can virtually shoot children in the Sandy Hook elementary school.

Gizmo01942 explains his motives for creating these games: “I’m doing this as my own way to deal with the events, and releasing only because it will entertain you guys, and any controversy it generates will serve as a nifty sociological experiment.” He goes on, “The media here is really the problem…the media immortalizes these people…and then they can be remembered forever.” Yet, it seems that Gizmo is also contributing to this ‘immortalization’ by creating his online games.

Although it would be difficult to censor an online creation such as this one, should we allow people to “deal with the events” in a way that might be extremely offensive to others, especially those who are direct victims of the shooting? The gamer specifically says his game will include child death screams and clear and offensive references to autism, making it clear that he is trying to closely reflect the events at Sandy Hook. This is not the first time that such a videogame has been created. Here is see an earlier video game, in which players are given the chance to virtually assassinate JFK. This videogame also generated significant media buzz and controversy.

I’ve been trying to write about this for about two weeks, and I keep getting overwhelmed by how complicated this issue is. I’ve looked at the crazily high levels of violence in this country relative to peer nations, as written about by Kenan’s Kieran Healy—though America is less violent than it’s been in decades; the contradictory research done on the relationship between violence in video games and spillover to people’s actual behavior; media representations of violence; and even news coverage of tragedies like Sandy Hook—and I still don’t think I’ve scratched the surface of these larger issues. So let’s limit our focus to whether Gizmo01942 has a point.

I’ve thought a lot about this, and no, he doesn’t. We should always try to make room for people to process horror in their own ways—as long as those ways don’t further harm others. Gizmo01942 uses pretty skewed logic to justify what (he) is doing, and I can’t condone something so poorly thought-out, even if it does mean impinging on his rights to do it. This seems better than Westboro Baptist Church’s actions, but that’s a very low bar to clear.