Sexual Selection, Agency, and the Reasonableness of Beauty 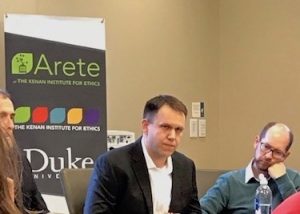 Arete Speaker Argues for the Importance of Beauty in Natural Selection

What role does beauty play when female animals select partners? Is sexual selection directly related to the fitness of a potential mate? Or do partners select each other on the more subjective basis of natural beauty, thus indicating some capacity to reason? Even Charles Darwin himself seemed to express uncertainty about the role aesthetics plays in this process. In the latest talk sponsored by the Arete Initiative, Dr. Daniel Pedersen of Exeter University defended the importance of female choice and discernment in evaluating beauty in potential male partners. Professor Alex Rosenberg (Philosophy) served as discussant.

Pedersen argued for the importance of practical reasoning in any explanation of sexual selection in which female choice or “agency” and aesthetics is mentioned. Throughout his talk, he referred to one of the latest works on the subject, The Evolution of Beauty, by biologist Richard Prum to illustrate his argument. Pedersen mixed support and criticism of Prum’s argument that females select potential mates on the basis of beauty even in cases when this comes at the cost to her fitness. This observation would seem to recognize beauty as a genuine good (perfecting and perfectable) in the process of sexual selection. Pedersen believes, however, that Prum’s argument does not go far enough to ascribe powers of judgement and hence discernment to females in the animal kingdom, and to prevent female choice from being arbitrary.

Pedersen acknowledged that while it would be next to impossible to measure directly powers of judgement and discernment in non-human species but (connecting Thomas Aquinas’s theory ascribing imperfect voluntary agency to animals with Prum’s own theory of “agency”), he feels there is a strong enough overlap in the powers of animals and humans that allow comparison. He concluded by saying that if we expect to find powers of practical reasoning in animals, then we must explain how beauty is used well.