Serendipitous Laughter: A Lesson in Humility

“A day without laughter is a day wasted” – Charlie Chaplin 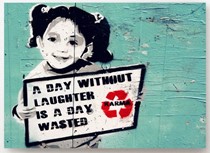 The past two weeks represent the culmination of my fellowship, as I brought both of my classes together for an “inter-intergenerational” discussion. Coordinating between both nonprofit organizations and classes of students presented its own set of challenges, as students across all generations wanted more guidance as to what the discussion would entail.

I learned years ago that, sometimes, serendipity will have its way in guiding an event, and I was confident that this class would manifest in one of those times. Explaining to students that they would have to just show up, I received reactions ranging from sheer excitement to nervous anticipation. These reactions permeated through me as I contemplated the potential for the class to be either a great success or a chaotic failure.

As the virtual Zoom room filled with students, a wave of relief rippled through my body when I saw that several my elementary school students and their parents were able to attend, after expressing doubts initially, due to conflicting athletic commitments. Thank goodness for the rain, I think to myself, reflecting on how miracles come in all shapes and sizes.

I began class by asking students to introduce themselves by saying their name and what fruit their code of ethics most closely represents. To model an answer, I introduced my ethics as a tomato, since “I focus on context when determining just behavior, and a tomato can either be a fruit or vegetable depending on the context.” Students seemed to like this introduction as they participated energetically by creatively classifying themselves as all kinds of fruits (and even some vegetables).

Following introductions and some more icebreaker questions, we split into two smaller breakout rooms so that discussions could get deeper and more personal. As I hopped between both rooms to make sure my students felt comfortable, I was pleasantly surprised with the depth of conversation tidbits I picked up. Not being able to fully engage in one room, I eagerly waited for the class to rejoin so that I could hear summaries of what I was missing.

Toward the end of class, I brought both breakout rooms back together for a large group discussion. “Can anyone share one piece of advice you have for a generation not your own,” I ask students. I continued facetiously with, “…and because I am the teacher, I will go first, and no one can stop me.” Before I can share my insight, one of my elementary school students unmuted and exclaimed, “I can stop you.” And stop me she did! I saw my grandparents (who are also students in the class) hysterically laughing as my younger student reminded me to speak with more humility. I began chuckling along too, as my student persisted in sharing her advice first. My prediction was proven accurate: serendipity shined.

After class, my co-facilitators and supervisor commented on how impressed they were with the level of discussion. This was the first time that such an inter-intergenerational class was taught, and it was clear from their reaction that they thought it was successful. I was proud of bringing these two organizations together and have since began to think of ways to ensure the partnership persists after I graduate.