Sarala Selvaraj is part of the India-based team of Orora Global. She works closely with the communities Orora supports by not only doing installations of solar products, but also cultivating relationships with community members and local NGOs. 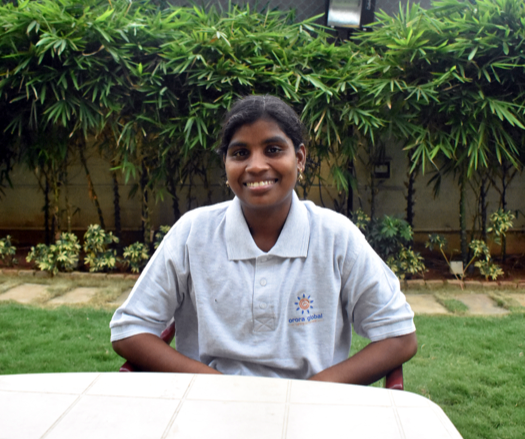 Throughout my internship, I heard only the highest praise for Sarala, so naturally, I was beyond excited to meet the woman herself when traveled to India for a few weeks of fundraising and on the ground project implementation. It was 2 weeks into our trip before Sarala and I were finally able to find time to talk as we were quite busy fundraising, networking, and serving customers. Although her native language is Tamil, she speaks English and I was able to conduct the interview with no need for translation. There are a few instances in which I added my own words to clarify (which will be marked in brackets).

Anika Richter: Where did you grow up, and what was your childhood and education like?

Sarala Selvaraj: My village name is Sumdibakkam, it’s in Kanchipuram district. From my childhood level, I was born and brought up there only.  Then I [started] my school—it was 5 km from my house…in my village. [My village] doesn’t have any school. Because it was far away–there was no bus–every day I would walk 5 km from my school to my house.

I have one brother and a sister, and my parents [were] doing daily labor. So daily they [would] go work for other lands and earn money and support my school education. The school is only available up to primary school near my village. So, after finishing my primary school, my father [said] that you don’t want to go for study because it’s too far away. It’s 7 km from my place. But I said no, I want to study. Then he bought a cycle for me, and then after sixth standard, daily I [would] go by cycle from my house to the school. That was also a government school; I studied in government school until 10th standard.

So, after finishing my 10th standard…my father said ok you don’t want to study because there is no 11th and 12th standard in that school.  If I want[ed] to study my 11th and 12th standard, I have to go to another school and that school you need to pay. So after finishing 10th, my father say you will stay at home and wait for any home jobs. Then my schoolteacher says to my father “she’s a good girl and a good talent; why you didn’t send her to the school?” My father tells her “because of my financial situation I am not able to send her to 11th and 12th standard.” Then my teacher comes forward and is paying all of my fees–for books and school fees for 2 years. So, I went for the private school…

After finishing the 12th standard, I was thinking…. if I want to continue my education, that means university. I have to come here to Chennai or Chengalpattu, so [my parents] won’t allow, they don’t have knowledge of that. So, after finishing my 12th standard, I went for an agricultural job with my mom… As usual, my school teacher came to my house and sa[id] “what are you going to study,” but my father sa[id] “no she won’t go to study because it’s too far away and also I don’t have any financial support for higher educations.” Then, the schoolmaster knows Peter [a man Sarala and I had met a few days before this interview].  So, she recommended me to him… He came to visit my family, and said ok I will support for her.

Then, in 2008, I came to Chengalpattu. and [Peter?] asked me what am I going to study. At that time, I had more interest in engineering, so I say “I want to study engineering.” So, I came here in May, and in that situation, I d[id]n’t know anything.  I don’t have any knowledge about the situation and about Chennai. So, he said “first you will join the mathematics school in Chennai so you will get the awareness and knowledge, and then you will go for engineering.”

So, after 4 years, I finished my engineering.  And after that I got a job in the university. So, in 1 year I was working as assistant professor in that college. But in my heart, I want to study more, so after working, I got another opportunity through Peter. I got support for more studies and got my masters in engineering…from 2013-2015.

AR: How did you come to join Orora Global?

SS: After finishing [my masters], I was searching for a job. At that time, my uncle was not well; he doesn’t have any daughters, so I fully take care of him for 3 months.  In that time, I didn’t have [a] mind to search for a job. So, after that time, through My Name is Kumar [an NGO that Sarala was connected to through Peter], the director knows Savitha. So, she recommended me, and said “Orora Global has positions there, do you want to work there?” I said yes. After that, I had interview with Savitha and she said “ok, you can join Orora.” So from 2015 onwards, I joined Orora and am still working at Orora.

AR: In Orora, what kind of work do you do?

In the beginning, I take in all the lists for where are the Irulas [an extremely impoverished and generally homeless community of people in Tamil Nadu that Orora works closely with] in Kanchipuram district, where are the places they are staying. I take all the lists. After that, Orora is doing the project with the My Name is Kumar community in June and July. So, I am busy with that community for helping and building [houses] for them and finishing that project… For 2 months, I am busy with that project. After finishing that, Orora got a new project for here, Thiruporur and different districts there.  So, I am involved with that project and installing the solar and interacting with the people–everything. And [after] also meeting with women and collecting all of their information, I submit it all to Savitha.

AR: What is the best part or your favorite part of your work?

SS: The best part is that I am very interested to interact with the people in the field. In the field, I can see the people’s faces and reactions, no? Before they don’t have awareness of the light and they have suffered a lot. After installing the light, you can see the people’s faces. They are very happy… There is that satisfaction. That’s the real feel I have from the people, you know? So that’s a great thing. And another thing, I went to Bangalore for one week and I learned a lot of things from the manufacturing and also the installing the lights in the field. I love that.

AR: And the biggest challenge?

AR: What is your biggest inspiration for this work?

SS: My most inspiration is actually from Savitha. She is from Bangalore and she studied here [in Chennai], and a lot of people don’t have the mind like her. A lot of people finish and they go off and earn a lot of money and settle their own life and do other things. But she is not doing that. She went abroad, but still she is helping with our nation, the people from India, those that have suffered a lot, and she is still helping. I am impressed very much from her.

AR: How has working with Orora changed you?

SS: Yea, there’s not many companies like Orora. It’s totally different. Personally, it has helped me a lot, and ma’am [Savitha] and also her mother help me a lot as a family. It’s not like a company…I really enjoy work with this company and all the circumstances I’ve crossed with this company.

AR: And finally, what do you think is the future of solar power and women’s empowerment in India?