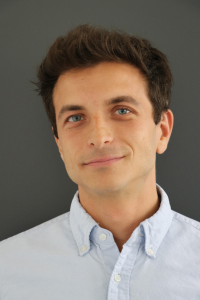 Carolina Isaza: Where did you grow up? What were your early years like?

Samer Araabi: I grew up in Kuwait for the first five years, and then in Dubai for ten years. My first years were weird. I left Kuwait because of the Iraq invasion, so my early memories are of Iraqi tanks of the streets, which explains my fascination with political violence and conflict studies. Dubai was nice; it was a much quieter place back then. I moved to the U.S. when I was around 16, to Orange County, California, which was a conservative, suburban place with little racial diversity. I think this was really a core part of my personal development in the sense that it exposed me to these ideas of privilege, race, and class, and how these things intersect and how they affect people.

CI: What is your educational background?

SA: I did my undergrad at UCLA and did a dual major in Political Theory and Economics. My Master’s is from the London School of Economics in Conflict Studies.

CI: What did your path to business and human rights look like?

SA: I’ve struggled a lot with what it means to do things that are meaningful and to produce meaningful change. I started by doing government relations work, and I moved from that into international development work, but the international development work felt problematic in a lot of ways that I felt were being overlooked by a lot of people, even within the field. So even though it felt like I was doing good work, it wasn’t clear that the work I was doing was being beneficial because people were not looking at it very critically. So, I found Accountability Counsel. It allows me to intersect with the development space without being directly involved in it, but rather as like an independent watchdog to make sure that these institutions are accountable and transparent, and that function the way they are supposed to function – something which I have found is incredibly rare.

SA: My work mainly consists of four main pieces. The first is providing training and tools to both internal staff and outside individuals or groups that want to better understand and advocate on issues of international development accountability. This includes things like convening the International Advocates Working Group or creating Accountability Resource Guides. The second is conducting case-based research, which involves identifying issues regarding particular cases. Accountability Counsel is working to provide the data, background, and power to support these cases, and to supply the ammunition to be more effective in their advocacy. The third is broader research on the state of accountability as a whole, and this is mainly taking the form of a database that we are working on to provide a user-friendly, interactive platform displaying data on all the accountability mechanisms around the world and the cases they have been involved in. The final component is internal rules and metrics for staff to better gauge the efficacy of their work and to improve efficiency, monitoring, and adherence to a broader theory of change. I would say I spend 60% of the time working on the database, 30% on case work, and 10% on the remaining two parts.

CI: What are the most rewarding and challenging parts of your work in Accountability Counsel and in the field in general?

SA: Naming the challenging parts is easy. First, data is hard to get. A lot of these mechanisms are opaque. And, a lot of the case-specific data is hard to compile from San Francisco just by sitting at a desk. The impact of the work can feel far away. The good thing about the work is that it feels amazing to bring a different skillset to a highly skilled organization. There’s so many amazing people here that it feels good to provide them with tools and skills they would not otherwise have. I feel that I am learning a lot about the people in this organization and in this field, who are all very knowledgeable and very committed to the work they do. You get to work with really fascinating people. Another big part of it for me is the opportunity to support and develop young leaders, to give people skills and tools to then go on and do amazing things for the world.

CI: In what ways has your work at Accountability Counsel changed your views about business and human rights?

SA: Before Accountability Counsel I was unaware that accountability mechanisms existed in this field, so it’s given me a much more positive outlook on the ability to change these mammoth institutions that had previously seemed so far away from any kind of local-level accountability. I now feel that real, meaningful change is within reach – which is new.

CI: What skills have helped you the most to succeed in this field?

SA: That’s a great question. I think a huge one is adaptability, because circumstances and needs and responses change so rapidly in a field like this. The tools and the resources that you need to call upon in order to do things effectively can change fast, so the ability do novel and innovative things has been massively helpful. This may sound a little absurd, but I also think a huge part of it is people skills. At the end of the day, much of this work is talking to people and convincing them. Really understanding what convinces people goes a really long way. I think having a data-based approach has also been extremely helpful. This is something that is rare in this field, but provides a very powerful way of looking at things and a powerful way to measure effective change.

CI: Who or what organizations do you look to as leaders in the human rights field?

SA: Hmm, I don’t know – this one? Accountability Counsel is the first organization of its kind. I also think we should be looking toward local and indigenous populations to be the leaders. It’s amazing that they have been the ones carrying the torch sometimes, which is how it should be. For example, the case of the Immokalee Indians in Florida who fought against Taco Bell to demand a living wage for their labor while picking tomatoes, and succeeded. We should be letting local communities carry the torch and guide them along the way, rather than doing it for them.

CI: What do you see as the biggest opportunities in this field, the biggest contributions still needed?

SA: I think in this field in particular the main opportunity is that these accountability mechanisms are still new and still being established, so we have the chance to structure them in a way that is actually effective and transparent before they get too solidified and bureaucratized. Now is the time to build standardized systems across these different organizations, make sure that they are effective and responsive. This opportunity won’t exist ten years from now. I think the challenges are that we are living in a time that is particularly profit-driven and profit-focused, a sort of neo-liberalist moment. The idea of return on investment seems to trump a lot of other considerations, including things like basic human and environmental rights. I think it’s hard to provide a compelling counter-narrative to companies that are designed to basically fulfill that purpose of return on investment. The idea that growth does not excuse violations of fundamental human and environmental rights, ever, is a surprisingly hard argument to make given that it seems like such an obvious statement.

CI: What kind of future do you see the business and human rights field moving toward? In other words, what do you think the future of the field will look like?

SA: I think it can go one of two ways: either a networked model or a centralized model. In a networked model, local communities increasingly have a sense of their own power and can increasingly communicate with one another and with advocates in other countries or people who are able to exert pressure at particular points, and they can use that to build a broader collective struggle against human rights violations in a variety of forms. I think technology would play a big part in this. Or, things can go toward a more centralized, corporate model in which you have organizations that speak on behalf of communities as opposed to supporting them to speak for themselves. These organizations basically insert themselves into the development process and create this kind of third body that does not actually generate much effective change. This becomes a sort of bureaucratized, detached version of what the ideals once were. I think it’s easy for things to go in this direction, which is why I think it’s great that Accountability Counsel has this “local first” model, a “follow instead of lead” kind of model, because I think it promotes the former type of development rather than this bureaucratized path.