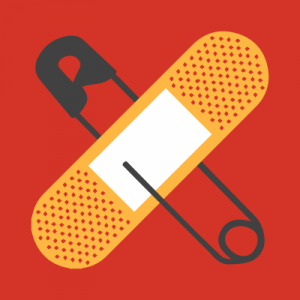 So the election really happened.

And the results were sobering, to say the least. I learned that we have to live with four years of a Donald Trump presidency. I learned that 60 million Americans have been swindled into voting for a blatantly disrespectful and dishonest candidate that may have already reneged on many of his campaign promises. Trump’s demeaning and at times destructive use of language has created an epidemic of fear and anger across the country. And I know that, while I live with the privilege of not being drastically affected by the outcomes of this election, many of my peers may not be so fortunate. But this is not a blog post about the election or about its implications, important as those may be; instead, I want to talk about pins.

I’m referring, of course, to safety pins.  Inspired by the movement for safety pins following the Brexit referendum, following following news of Trump’s election, many across social media and the blogosphere began posting about allyship for oppressed and voiceless groups. One of the movements that seems to have gained the most traction is that of the safety pin: an easy and effortless way to show that you care.

And therein lies the problem. Don’t get me wrong, showing support and compassion for marginalized groups and being an intimate, personal safe space is a noble cause worthy of pursuing. In fact, contributing to organizations that strive to make a difference may be more important now than ever. Yet we too often gratify our desires to engage in social and political activism with social media movements that produce no practical results.

While I recognize the importance of such movements in spreading a particular message, the danger lies in how they can quickly devolve into movements of complacency and passionate apathy — frustration and anger are almost always directed towards online channels, where they quickly simmer down and disappear. Look no further than the “outrage” over the death of Harambe which quickly devolved into a maelstrom of memes on social media platforms, serving as a parody of the meaninglessness of passive online activism. In an age of flashy headlines and news delivered by the soundbyte, it has become all too easy to get involved without the meaningful sacrifice necessary to bring about consequential change.

This is representative of a broader trend of “token activism,” in which individuals are outspoken in their support for some political/social ideology without making any real sacrifices towards its fruition. It is easy to simply share a news article and never contemplate the implications of its contents. It is easy to make an opinion post and never entertain the counterargument. And it is easy to wear a safety pin in the name of inclusivity and never dig deeper into how to make society more accepting as a whole.

Again, I am not saying that raising awareness is in some way trivial; far from it, spreading a message is of extreme importance. And every little bit of support shown for a larger movement counts for something. But it is important to balance the importance of awareness with the damage it causes by lulling netizens into a misplaced complacency. So donate to charities and action groups. Make phone calls. Meet your local staffers.  But above all, please be more than just a safe space.