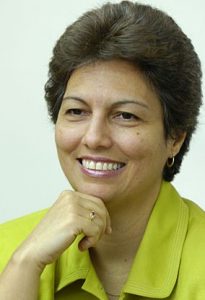 Rosario Espinal sees her roots as a political sociologist going back to early childhood in the Dominican Republic. “I was a child when [Rafael] Trujillo, the dictator, was killed, so I remember – somewhat vaguely – but I do remember the aftermath of the fall of a dictator,” she said. “For me, what I saw stayed in my mind, and even though the dictator was gone, there was a legacy of repression still for a number of years.” She explains, “I was already a young adult when there was a transition to democracy in the Dominican Republic,” adding, “I think all those events shaped my academic interests.”

Knowing she was interested in politics, Espinal chose sociology as her field largely because of her Latin American context. “At the time, in Latin America, sociology was the field for politics. Political science, in the old days, was not as central for Latin American academic life, so I saw sociology as a way of doing work in politics.” Although she’s committed to academia, having served both as department chair and director of the Latin American Studies Program during her twenty-seven years at Temple University, Espinal also remains invested in issues of applied politics and human rights, especially in her native country. She’s a well-known public intellectual in the Dominican Republic, writing a weekly column carried by several online and print newspapers.

Her most recent columns have critiqued the Dominican government’s actions during the ongoing controversy over citizenship for people born to undocumented immigrants on Dominican soil. Given the DR’s historical reliance on cheap Haitian labor in the agricultural sector, the vast majority of people born to undocumented immigrants are of Haitian descent. Prior to the 2010 constitution, it was generally understood that children born in the Dominican Republic qualified for Dominican citizenship, with the exception being the children of diplomats and “people in transit”: families not actually residing in the DR on a permanent basis.

However, in 2010, the new constitution declared that all children of undocumented immigrants are born “in transit,” and thus not Dominican citizens. The Constitutional Court, based on a Supreme Court ruling of 2005, recently applied that status retroactively to everyone born to undocumented parents since 1929. Suddenly it is possible to have several generations of stateless people in one family. Espinal has been tracing the political and social roots and implications of the Constitutional Court ruling, including the government’s framing of the issue.

“The government says Dominicans have the right to set the parameters for nationality … we are sovereign,” she explains. “Of course, critics then argue that it is racism.” She adds, “There is no dialogue, because the government says that [racism] is not the case. But more than that: most Dominicans are really worried about the significant presses of Haitian migrants in the Dominican Republic.”

Haitians and Dominicans of Haitian descent represent a significant population in the DR, and some worry that granting citizenship (and encouraging more immigrants) will put strain on the DR and its resources. In contrast, Espinal says, “The government created the immigration mess,” by tacitly encouraging Haitian immigration for the sake of cheap labor in agriculture and construction – both sectors that contribute heavily to the DR’s growing economy. Rather than fixing the “mess,” this current court decision is “going against granting rights to the descendants of these immigrants.”

For Espinal, this concern for human rights is inextricably bound to her sociological work on democracy. Currently, she’s using survey data to study gender gaps in political and civic participation in Latin America. Her findings so far are not entirely encouraging: “Even though there has been a democratic move in the region, and important gains have been made for women to participate in the economy, in the educational system, and in politics, still we see legacies of the inequality and the differences that historically characterized gender relations.”

Despite the often slow progress of democracy, Espinal is not disheartened. Rather, she argues, democratic experience has played a key role in society’s growing support of human rights. By broadening our notions of who deserves equal protection and from what, participation in an open society incorporates more people, and more issues, into the political agenda. It is a process – flawed, to be sure – that Rosario Espinal has learned to embrace. “Over time,” she says, “democracy has become the space to really argue for human rights.” 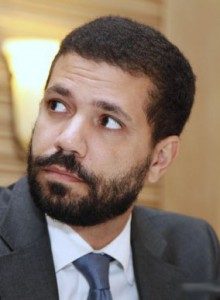 The Dominican Republic of Nassef Perdomo’s childhood wasn’t exactly the model of an open society. “Dominicans had a very difficult relationship with democracy,” he explains. “In the late ’60s and ’70s we had a government that was not formally acknowledged as a dictatorship, although it had all the trappings of one. And my parents were militantly against that government. They were exiled: my father escaped death at the hands of the Police by the breadth of a hair.” In those days, his parents were “actually pretty hard left,” Perdomo says. “Fortunately, they became very strong believers in democracy. That government ended, not because of an armed struggle, but because there was a party that at that time was the most democratic party in our political system. … So my parents instilled in me a very strong belief in democracy, in the importance of people having rights, not to take them for granted.”

But in college, studying law, Perdomo rebelled against his parents’ leftist convictions, embracing conservative beliefs. “I was also ‘that guy’ in college,” he says, “the guy who wanted to get to the bottom of everything and find ‘The Truth.’” But that pursuit ultimately wore thin. “The attraction I felt towards those positions is that they present you with simple truths,” he said. “Their logic is very elegant. But that’s precisely their weakness, because reality is not elegant. It’s just the way things are – people have their own needs, everybody has their own situation: you can’t judge a person on an artificial standard. In the end, it made no sense.”

After earning his first law degree, he worked as Director of the Rule of Law Projects at the Foundation for Institutionality and Justice (FINJUS) in the Dominican Republic, after which he went to Spain to begin graduate studies in constitutional law. Through his professors there, he began to realize that what was true of war for Clausewitz was true of law for him: “Law is politics through another means. What we call ‘law,’ most of the time, is a rationalization of the way things are: not the cause, but the effect of the real balance of power.”

It was this new understanding that animated and empowered his human rights work back in the DR through both FINJUS and Jesuit Refugee Services. The passion of his college years had not diminished, but transformed: “I never really lost my interest in the pursuit of truth, it just changed. Instead of being a pursuit of ‘The Truth,’ it became a pursuit of truth – what’s real and what’s important. I come from a very unfair country, in every sense. … It was important to me to understand and work with the fact that government has to be limited, but also what the role of the government is in a society. … When the state does things I feel are wrong, or when the state allows things to happen that I feel are wrong, it bothers me, because then what’s its use?”

These questions about justice drive Perdomo’s legal work opposing the Dominican Constitutional Court’s declaration that those born to undocumented parents on Dominican soil are not entitled to citizenship, and that this ruling would be applied without individual hearings to cases dating back to 1929. “Our constitutional tribunal did something it cannot do, which was make an interpretation of the law that limits rights,” he explains. “That’s expressly forbidden in the constitution. Also, its ruling had retroactive effects, stripping people of their nationality: people who had the right to nationality already. And it ignored the international human rights decisions and pacts which the Dominican Republic is party to. It’s an absolute mess.”

Perdomo believes his country stands at a moral crossroads, but he is hopeful about the outcome: “The Dominican Republic is at a very interesting place in its history. I think the far Right is correct when they say we’re in a fight for the soul of this society. I believe that to be true. We’re in the process of realizing that although we’re half an island, we’re not isolated from the rest of the world. We have to take our rule of law seriously. We cannot pretend to act as a rogue nation and at the same time enjoy the benefits of being party to the international community.”