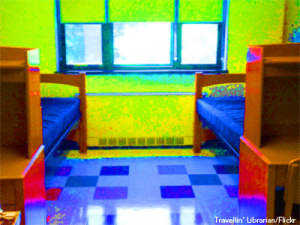 After the initial high of “OH MY GOD, I GOT INTO COLLEGE” dies down and the reality that you will be leaving home next year to live amongst thousands of strangers sets in, the anxiety about whom your roommate will be becomes all consuming. Of course, not everyone entering his or her freshmen year of college is as concerned as I make it seem. Yet, let’s get real: roommates are a huge source of apprehension for the average incoming freshmen.
Obviously each person hopes that he or she will be paired with someone with whom he or she is compatible. Luckily the majority of universities have some type of questionnaire that asks generic questions such as, “Do you smoke?” and “Do you stay up late?” in hopes that students will then be paired with others with whom they are somewhat compatible. These guidelines can offer some comfort to incoming students, yet just because two people go to bed at the same time does not mean that they are in any way similar personality wise. And so students are faced with a decision: go random or self-select.

I was a tad bit shocked when after acceptance letters had been sent out, I received an invite on Facebook to the Duke Girls Class of 2016 Roommate Group. Out of curiosity, I accepted. I began reading through the hundreds of surveys that girls in my class had filled out. Each girl had uploaded a document, answering over thirty questions that were posed by the site’s anonymous designer. Each girl was actively “searching” for a roommate. As I scanned through the posts I was mystified by how comfortable people were. Here hundreds of girls were posting everything about themselves onto a public page in which other girls would simply go through and do what I was doing—judge. Every question from “How many siblings do you have?” to “What is your clothing and shoe size?” was asked. It was like an online interrogation of sorts. I felt uncomfortable with what was going on. Yet, many others seemed to think this page was God’s answer to the hell that is picking your roommate.
Every moment more posts were uploaded, more comments were posted, and more pairs declared themselves roommates. Continuously girls were choosing each other based solely off the fact that they shared common answers to a few superficial questions. I watched as the artsy girls chose the other artsy girls, the New York girls banded together, and the Division 1 athletes immediately cliqued. As the posts were uploaded, people continued to comment with “Oh, I love that show too!” and “Ah, I am also from San Diego!” None of the comments acknowledged differences in answers. Girls were simply looking for mirror images of themselves.

I have a problem with this situation because colleges are continually attempting to enhance their diversity. The finest institutions in America draw on students from countries and cultures across the country and the globe in an attempt to enrich the academic and social experiences of their students. Yet, if students are, before even getting to college, already forming cliques of people exactly like them, how is diversity benefiting anyone? It seems like when we have a choice, we choose to stay in our comfort zones.

In 1954, the Supreme Court ruled in Brown v. Board of Education that there is no such thing as separate but equal and that “separate is inherently unequal.” Yet today almost 60 years later while students have the right to integrate, they chose to separate on the basis of identities such as race. Why does this self-segregation occur? According to Tommy Lee Woon Associate Dean at the Office of Pluralism and Leadership at Dartmouth College, “One reason is ‘positive’ —shared identity, support and safety. The other is ‘negative’¬—people who feel self-conscious about being different gravitate towards those they think they have something in common with them.” Dartmouth like many other colleges struggles to integrate students of different races, religions, and social-classes. In this modern and often isolating world, students of the same background tend to stick together to find a sense of belonging and create a collective environment. This self-segregation is widely believed to be a very negative reality of campus life. However on the flip side, I know many girls who see self-segregation and similarly self selection as a guarantee they will be comfortable where they are living during their first year of college. And is that wrong? The transition to university life is already a scary one; the comfort of knowing your roommate is a nice security. So while diversity may be ignored and superficiality exuded, can we really blame those who desire some sense of familiarity during this first year in a foreign place?

How to go about choosing your roommate is a personal decision and one that should not be made hastily. While I understand the security associated with a roommate who is similar I also think that learning to interact and cope with people dissimilar to you is crucial. So what did you decide? Did you pick out of a hat and hope for the best or did you play the matching game, sorting through your options until you found the “perfect” fit?