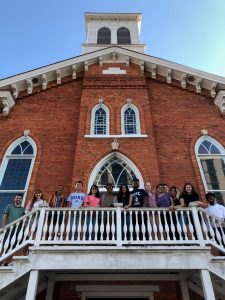 72 hours, 14 students, 3 cities, and 1 memorable experience. Kenan’s Alternative Fall Break introduced students to the complex “telling” of the last two centuries of history in the South through the monuments, museums, and memories preserved in Montgomery, Tuskeegee and Atlanta. What forms our generational memory? Whose stories are told? How do those stories influence us? These questions recurred throughout visits to both old and new sites that inform the collective memory of America’s history of slavery, lynching and segregation and influence what all of that means for us today.

In Montgomery, the first White House of the Confederacy and Jefferson Davis’s gold star on the Alabama capitol steps were just a short distance from the Freedom Rides Museum built in the same Greyhound station that was the marked by violence during the protests of racially segregated transportation. Allison Bunker, a first-year student from Seattle, commented that these contrasts provided the opportunity to experience “history not in bits and pieces but in whole narratives of places and to see multiple sides in one place.” With stops at the Dexter Avenue King Memorial Baptist Church, The Legacy Museum and National Memorial for Peace and Justice, Martin Luther King National Historic Site, the Tuskeegee Airmen National Historic Site, and the Center for Civil and Human Rights, students learned some of the harsher truths of America’s past—pieces of which many admitted were entirely new to them. Lucas Lynn, a student who originally hails from Alabama, summed up the experience by sharing, “America tries to distance itself from an ugly past, but when you hear from those who marched on Selma, who went to jail as kids for a movement, you become connected and realize that the issues then are not unique or different from the current ones.”