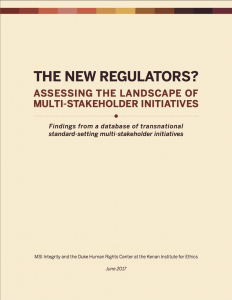 The New Regulators? Assessing the Landscape of Multi-Stakeholder Initiatives (June, 2017)

MSI Integrity and the Duke Human Rights Center at the Kenan Institute for Ethics are excited to release a new report on the global landscape of standard-setting multi-stakeholder initiatives (MSIs). The New Regulators? Assessing the Landscape of Multi-Stakeholder Initiatives analyzes 45 MSIs that set voluntary standards for business and government conduct on a range of human rights and environmental issues. In the report, we draw on a new online database of standard-setting MSIs to assess the growth and industry distribution of standard-setting MSIs, which have risen to prominence as a new category of governance institution since the 1990s. We also examine how these MSIs are governed and the extent to which they include different stakeholder groups. Our analysis reveals that a majority of standard-setting MSIs fail to meaningfully engage the workers and communities that are most affected by the standards they set. We also find that many MSIs lack one or more of the basic institutional elements necessary to effectively set and enforce their own standards. Our hope is that the report and database serve as useful introductory resources on MSIs and contribute to discussion and debate among MSIs, their stakeholders, and researchers interested in the field. To learn more about the report, please download it or read an introductory blog post by MSI Integrity. 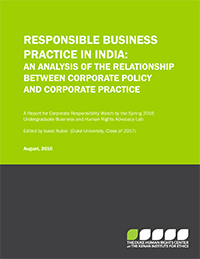 Responsible Business Practice in India: An Analysis of the Relationship between Corporate Policy and Corporate Practice (August, 2016)

This report was created for Corporate Responsibility Watch by the Spring 2016 undergraduate Business and Human Rights Advocacy Lab and edited by Isaac Rubin (Duke ’17). In July 2011, India’s Ministry of Corporate Affairs released the National Voluntary Guidelines on Social, Environmental, and Economic Responsibilities of Business (NVGs). This landmark document identifies nine principles that businesses should uphold in their capacity as responsible actors committed to respecting and promoting the general welfare of Indian society. Corporate Responsibility Watch – an initiative supported by fourteen Indian organizations and independent consultants – has strived to both understand and strengthen the NVGs by researching corporations’ commitment (or lack thereof) to corporate social responsibility. Recently, CRW created an index that evaluates companies’ corporate social responsibility policies across five dimensions: respecting employee dignity, non-discrimination at the workplace, community development, inclusive supply chain and community as business stakeholder. By scoring and ranking companies according to their performance in these categories, the Index provides an immensely useful resource for identifying patterns in corporations’ progress towards realizing the NVGs’ principles of business responsibility. But, as CRW is careful to note, because the index examines only policies and relies exclusively on companies’ self-reported information, the index also has some limits. To complement CRW’s analysis, students conducted research on 9 companies, focusing on the relationship between corporate policies and actual business practices. Each case study provides an important vantage point for understanding how a company’s industry, reputation, or performance on CRW’s policy metrics impacts the relationship between corporate policy and practice.  Taken together, the cases studies seek to spur discussion of how to evaluate and encourage companies’ commitment to the NVGs and CSR more broadly. 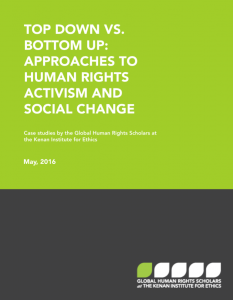 Top Down vs. Bottom Up: Approaches to Human Rights Activism and Social Change (April, 2016)

This report explores the dynamics of human rights activism and social change though the lens of examining “top-down” and “bottom-up” strategies. Over the 2015-2016 academic year, the Global Human Rights Scholars conducted a range of case studies and extracted potential lessons across diverse settings about how and why human rights and social change does, or does not, emerge. Case studies include: the protection of women human rights defenders, Sweden’s unusual track record in supporting refugees, the 2015 climate change negotiations in Paris, the Black Lives Matter movements at Yale and Duke, and transitional justice in post conflicting settings. A website for this report can be found here. An overview to the report summarizes lessons learned. 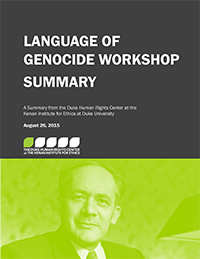 Language of Genocide Workshop Summary
(August 26, 2015)
A Summary from the Duke Human Rights Center at the Kenan Institute for Ethics at Duke University of a Workshop Held April 16, 2015

On April 16, 2015, an interdisciplinary group of faculty and students participants hosted a day-long interdisciplinary workshop at the Kenan Institute for Ethics to explore the use of genocide terminology across the twentieth century. The workshop was comprised of four panels, with undergraduate students presenting for the fourth panel their year-long research projects done under the auspices of the interdisciplinary working group.  This report, written by Savannah Wooten (UNC-Duke, class of 2017) and Matthew King (Duke, class 2018), offers a brief synopsis of the first three panel presentations. 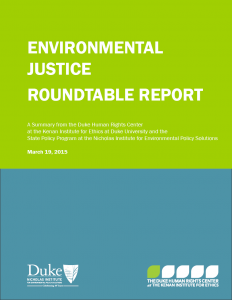 This report summarizes discussion from a roundtable including faculty from Duke University, the University of North Carolina at Chapel Hill, and North Carolina State University as well as research staff at the universities and Research Triangle Institute. The participants represented a variety of disciplines including geography, design, urban planning, economics, sociology, political science, philosophy, law, and environmental science. Environmental inequalities arise from the inequitable distribution of environmental resources, burdens, externalities, and even benefits among social groups (Pellow 2000). The existence, persistence, and determinants of environmental inequities and injustices has been documented and debated by scholars of public health (e.g., Brunekref and Holgate 2002; Pastor et al. 2005), social science (e.g., Ash and Fetter 2004; Downey 2005, 2007), and law (e.g., Godsil 1991; Kaswan 1997; Bullard 2000). Research has shown that in the U.S., the unequal distribution of environmental amenities and dis-amenities falls along racial, ethnic, and socio-economic lines. (Downey and Hawkins 2008). Environmental hazards are more likely to be located near minority and low-income populations. Environmental amenities, like parks and greenways, are less accessible to these same populations (Brulle and Pellow 2006). 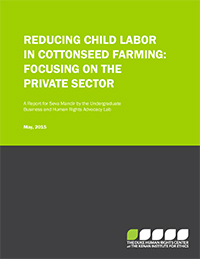 Reducing Child Labor In Cottonseed Farming: Focusing On The Private Sector
(May, 2015)
A Report for Seva Mandir by the Undergraduate Business and Human Rights Advocacy Lab

This report discusses interventions used to address child labor in agricultural production. Its primary focus is on the private sector. The report was written by undergraduate students in Duke University’s “Business and Human Rights Advocacy Lab” class (spring 2015), for Seva Mandir. In the last decade, Indian companies and multinational corporations have been increasing their direct control over cottonseed production areas. Between 2006 and 2010, for instance, the three most important multinational companies in cottonseed (Monsanto, Bayer and Advanta) increased their direct control of production areas by 194% (from 3,400 acres to 10,000 acres). As one report documents, “large companies are slowly increasing their control over the seed industry by expanding their production area and also by acquiring smaller companies.” Our hope is that the report provides insights to Seva Mandir that are relevant for its existing programs addressing child labor originating in Southern Rajasthan in hybrid cottonseed production occurring in Gujarat. 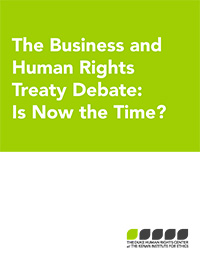 In September 2014, as part of the “Conversation in Human Rights” series, the Duke Human Rights Center at the Kenan Institute for Ethics hosted a discussion on the evolving obligations of businesses to respect human rights. Panelists included Dr. Puvan Selvanathan (Member of the UN Working Group on Business and Human Rights and Head of Food and Agriculture at the U.N. Global Compact), and one of the central questions of the conversation was whether the United Nations should move forward with a proposed treaty on transnational business and human rights, or whether it should focus on implementing the current Guiding Principles. This submission by Dr. Selvanathan shares the view he offered at the Kenan Institute on the treaty debate. It is his personal opinion and does not reflect the position of the UN Working Group on Business and Human Rights or the Global Compact. A second installment will be published in January 2015. 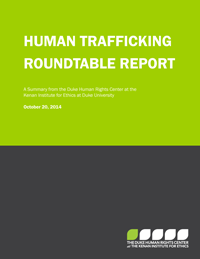 On October 20, 2014, the Duke Human Rights Center at the Kenan Institute for Ethics hosted a roundtable on human trafficking. The roundtable included the Kenan Institute’s annual visiting human rights fellow, Dr. Anne Gallagher, as well as faculty from a broad range of disciplines from across Duke and other universities. The primary goal of the roundtable was to facilitate an interdisciplinary conversation on human trafficking and to provide an opportunity for participants to share their work as well as to learn about ongoing research outside their academic fields. The summary is not intended to be a document endorsed by consensus of the group nor to be taken as reflecting the positions of individual participants. 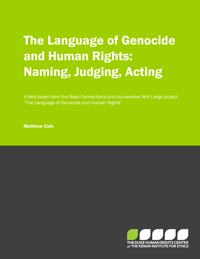 The Bass Connections/Humanities Writ Large project “Language of Genocide and Human Rights” is examining the use of the word “genocide” from its inception in the 1940s to the present.  Project members are attempting to map both the usage and development of the term in human rights discourse and how it has functioned in international political developments since World War II. The project consists of an interdisciplinary team of Duke undergraduates, graduates, faculty members, and researchers.

In October the project group met to discuss Political Science Ph.D. student Matthew Cole’s paper, “The Language of Genocide and Human Rights: Naming, Judging, Acting.”  In it he summarizes the current state of the field on genocide language research. 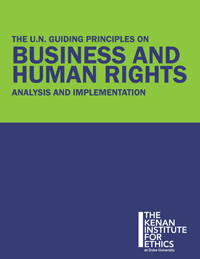 How can the language and architecture of the human rights regime apply to companies, when it was created as a state-based system? What is the balance between focusing on processes versus outcomes in assessing the performance of both states and companies? How should all organizations in this domain–from companies with competing priorities, to resource-challenged NGOs, to the U.N. Working Group–best focus their limited time and capacity?

What is Discover University?
A brief overview of Discover University, the product of collaboration between the National College of Ireland and students from the Kenan Institute’s DukeEngage Dublin program, which gives a taste of the college experience to disadvantaged Irish and migrant youth from all over Dublin.
Produced in November 2010. Approximately 5 minutes.

Manifesto for the Corporate Idealist
Christine Bader, ES ’83 HS ’89, was a nonresident senior fellow at the Kenan Institute for Ethics at Duke University in 2011-2012 and wrote the U.N. Guiding Principles on Business and Human Rights: Analysis and Interpretation. She currently serves on the Kenan Institute Advisory Board and recently completed a term as Advisor to the U.N. Secretary-General’s Special Representative for business and human rights. From 1999-2008, Bader worked for BP in Indonesia, China, and the UK. With stints in investor relations and corporate planning, she spent most of her time with the company addressing the social impacts of its projects on communities in the developing world. Among many other activities, she serves on the advisory board of The OpEd Project, an initiative to broaden the range of voices in public discourse. She recently published a book, The Evolution of a Corporate Idealist: When Girl Meets Oil. 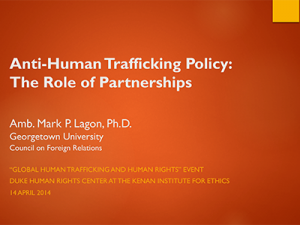 On April 14, 2014, the Duke Human Rights Center at KIE and its Student Executive Committee organized an event on “Global Human Trafficking and Human Rights.”  Mark Lagon, former Ambassador at the Office to Monitor and Combat Trafficking in Persons at the US Department of State, and Louise Shelley, founder and director of the Terrorism, Transnational Crime, and Corruption Center at George Mason University joined Duke undergraduates for this conversation in human rights. Amb. Lagon shared with us his presentation.