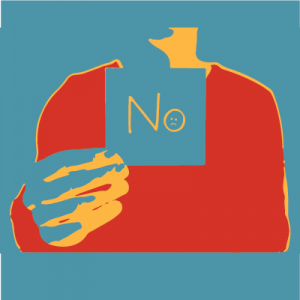 One word, nine letters, yet the cause of so much pain and destruction. We have all experienced it – not being invited to a party, not being accepted to a college, being dumped by a significant other, not being chosen for a job, or most recently not getting into the sorority, fraternity, or SLG that you wanted. It does not matter what causes the rejection because the feelings of disappointment, confusion, inferiority, and offense are the same regardless. We rack our brains, wondering what we could have done differently to produce a different outcome. And we scoff at those who try to tell us that there is nothing we could have done differently, that the rejection is not a reflection of our value or our worth as a person. Our loved ones pull out the cliché phrases meant to help us cope: “what doesn’t kill you makes you stronger,” “when one door closes, another one opens,” and (my personal favorite) “everything happens for a reason.” While there is no way to test whether these phrases are true, the mere possibility of them being true can bring us consolation. But, why do we need this consolation? Why does rejection bring us so much pain?

Rejection occurs when someone says no to us. When they reject us, they are essentially saying they do not want us. They chose someone else instead of us, which means that there is someone better than us. While these are often not the direct reasons for our rejections, this is the way the rejection feels. We are social beings, so the desire to feel wanted, to feel accepted, to feel loved is a part of our human nature. When we are rejected, it feels like these desires are destroyed, and we feel unwanted and unloved – we feel lost.

Personally, since arriving at Duke, I have experienced several rejections. Honestly, the rejections started even before arriving at Duke. In the summer, I applied to three different pre-orientation programs but was rejected from all three. When I arrived on campus, I was overwhelmed by the many groups of students with P-Wild, P-Build, or P-Waves shirts. I felt intimidated by these students, knowing that they were accepted into the programs and I was not. Later in the fall, I applied to the Baldwin Scholars program. I knew that it was a very selective program, but since it sounded incredible, I decided to take the chance. I made it to the final round of interviews, but when I stopped by my mailbox the next week, my heart sank as I read the classic “we had a very large number of qualified applicants this year…” A month or so later, I received another rejection from the Duke Engage program. The rejections were adding up, and it was nearly impossible not to feel disheartened. I knew Duke was a competitive school to get into, but I did not expect it to be even more competitive once I was here. Two more rejections occurred recently during the recruitment process for SLGs and sororities. I made it to the last rounds of the SLG and sorority that I liked most but did not receive a bid from either. I was upset, and it seemed like the weeks I spent rushing from one event to the next were a complete waste of time. The worst part about my rejections is that each time I knew at least one person who had been accepted. While I am genuinely happy for these people, spending time with them is a constant reminder of my rejection.

I understand that my rejections will not matter in the grand scheme of life, which is true for nearly every rejection. They are just temporary setbacks in our lives. The things from which we are rejected are of minor importance, and the aspects of our lives that hold real importance cannot and would not reject us. So why do we buy into the seemingly superficial things from which we can be rejected? For example, why do we buy into and participate in processes like recruitment or rush when we know they often result in tears of sadness instead of joy?

It is because we observe the happiness of others in these positions and want that for ourselves. We believe people when they tell us about the benefits of a position and how incredible it is an experience to be a part of a specific group. We dream about our lives after being accepted and how glamorous they would be. However, we often forget to think about how we would feel if we were rejected. We fail to weigh all the possible outcomes, which can make the rejection even harder if it does happen. It is important to consider both the possibility of acceptance and the possibility of rejection – does the possibility of happiness from acceptance outweigh the possibility of pain from rejection? If we took this into consideration, then we would possibly be able to take away some power from the one, nine letter word. We would still inevitably feel disappointed when rejected, but we could at least be confident that our pain is the consequence of a worthy goal.