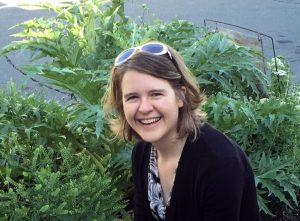 Rebecca Welper is the Director of Development and Special Projects at the Resource Center for Women in the Ministry in the South. Raised in Columbus, Ohio she earned a BA in English from Oberlin College before moving to the DC area. There she worked at various nonprofits, taught middle school English, and earned an MFA in Playwriting at Catholic University. An award-winning playwright, she co-founded the DC Area Playwrights Group and the DC Queer Theatre Festival. She has worked on political campaigns in Virginia, Maryland, Wisconsin and North Carolina. A thread running through her activist and artistic work is centering underrepresented feminist and LGBTQ voices and perspectives. In her work at RCWMS she teaches writing workshops and recently organized “Coming Out of the Shadows: Connection and Spirituality Among LGBTQ Communities.” She lives in Durham with her spouse and their one-and-a-half-year-old child.

CS:  What brought you to Durham and to the Resource Center?

Rebecca Welper:  I came to Durham for love! I met my spouse working on a political campaign in 2012. We worked on Tammy Baldwin’s Senate campaign, electing the first openly LGBTQ person to the US Senate. After the campaign, we were living in different places and had a long-distance relationship for a time. Then we decided to move to Durham, where my partner had lived previously and had strong connections, both to the place and to people here.

I found the Resource Center through a colleague who introduced me to Jeanette Stokes, the executive director and founder of RCWMS. I had a deepening interest in feminist spirituality since my mother’s death in 2012, and I found RCWMS to be a wonderful place for me to land in Durham. The first work I did at RCWMS was leading a writing workshop for women under 40 called “Truthy Writing.” It was a six-week, prompt-based writing workshop, focused on exploring topics that often we don’t necessarily talk about as openly, digging in to some deeper experiences of loss or change. We would do writing exercises and then share them with the group.

This kind of writing is part of my theory of social change. This comes from my playwriting background as well. I see art as a platform for change: changing hearts and minds through watching a piece of theater, for example, or by getting to know your own inner landscape through writing. In my teaching, I offer opportunities for self-transformation through writing and sharing with a community. Individual transformation, I believe, comes from people knowing themselves better and living more authentically. This can have ripple effects, and positively impact all the work that individuals want to do in the world. It’s a kind a microcosm; we can’t improve the world if we as individuals are living and acting unconsciously and perhaps unwittingly harming ourselves and others.

CS:  What is your vision for the process by which art transfers to social change?

RW:  I think it happens in small increments. One goal of my playwriting is to encourage empathetic experiences towards the characters, who may be different than who we normally interact with. For example, in grad school my thesis play was called “She Said/She Said.” It was inspired by true events of a lesbian custody battle. One of the characters leaves her partner, takes the baby, and has a religious conversion, where she then wants to further distance herself from her former partner and former life. I tried to write a play that showed both of these characters and their struggles in a sympathetic light.

We’re so divided in this country, and I saw this play as a way for people to really see and empathize with characters they may usually write off as “the other.” Engaging with a story—yes, it’s a form of entertainment, but also an experience of actually seeing people in a new way.

CS:  I kind of think it’s magical that the audience is trapped in a box with these characters for a set period of time. Is that in line with what you are talking about?

RW:  Right, yes. You’ve chosen to spend this time watching to see what happens. The bottom line is about empathy and understanding: opening to new truths, new experiences that could have an impact on how you, as an individual, approach the world. This may have a small impact on your individual interactions, or it may inspire more activism on your part.

CS:  How did you get to Tammy Baldwin’s campaign, and where was it? It’s not a name I’ve heard.

RW:  Oh, you need to know Tammy Baldwin: Wisconsin. So in 2012, in late summer, I’d finished up a grant for playwriting and I was looking around for more work. That summer, I had volunteered with the marriage equality campaign in Maryland, which was on the ballot that November, and I was enjoying knocking on doors and talking to people. That’s another form of social change—I believe in just getting out there and talking to as many people as possible. So, I was really jazzed up about seeing the possibility for change. A friend of mine was the statewide director for Tammy Baldwin’s field campaign, and they posted on Facebook saying they were looking for people to knock doors for six weeks out in Wisconsin. Since I was looking for a new gig at the time, it was good timing, so I thought it would be a fun adventure.

I went out and joined this team of nine people that went around to small towns in the western part of the state. Many of the people who lived out there didn’t know who Tammy Baldwin was, although she had been a U.S. Representative for Madison for years. We made a difference in some of those western counties: they went for Tammy Baldwin, and she was elected to the Senate.

It was interesting talking to people, because Wisconsin has been a very purple state over the years. There are a lot of people all over the country who are disenchanted with electoral politics, national politics, and there are a lot of reasons to be. But I could see the impact of people voting; it does make a difference. Beyond the historic nature of Baldwin’s campaign, it was fun to talk with people and get them excited about a great, progressive candidate, who also happens to be a woman. We need more women in the Senate and politics in general.

CS:  You must have come to North Carolina shortly after Amendment One [the 2012 amendment to the NC constitution that defined marriage as between one man and one woman].

RW:  Yeah, so we moved here in May 2013. I saw a lot of stuff about Amendment One, it was kind of like the state was going backwards. But what we also saw were signs that were anti-Amendment One, so Durham felt like a very welcoming place. I knew Durham was the only county that voted against it. And it was exciting when the court struck it down, on October 10, 2014.

CS:  How did you become a feminist?

RW:  I really have been a feminist my whole life. My mom was feminist, and her mom was too, in their own ways. It was just kind of the air I breathed. I’m trying to think of any early, formative memories, but it must have just been my mom talking about things not being equal for men and women, and how that wasn’t right. I got more feminist education at Oberlin, which also made my understanding and activism more intersectional, but before that I was very strongly feminist. I have great-grandmas on both sides of the family who have college degrees, so I have a lot of strong, and in certain ways, privileged women in my family history.

CS:  How do you see the work you do connecting to broader liberation struggles?

RW: It’s feeling challenging at this stage of my life, raising a toddler who takes up so much of our family’s energy! I see so much that needs to be done, so it can get overwhelming, where to even begin. I try to focus on the small things that I am doing or part of that are working toward change.

I think it’s very powerful having this space at the Resource Center that offers programs and perspectives that are anti-patriarchal and anti-racist, particularly (although not exclusively), in the realm of religion and spirituality. It’s a small niche, and we’re not a large organization, but I think it does benefit people who are able to come to our programs and read publications that we put out. We can be a resource for them, and that helps them in their movement work. I think about some of the essays I’ve read in old newsletters from the 1980s. I think if I had been exposed to that perspective when I was young, it could have been very transformational for me. I had a feminist perspective about a lot of things, but I wasn’t able to articulate very much when it came to religion, which is a huge influence for so many of us.

So to come back to your question, I think part of my role is helping people connect to their true selves, to be compassionate toward themselves and others in a capitalistic, imperialistic, racist, patriarchal, heteronormative society. To help people connect to their own inner strength and to each other, to move forward with the work they choose to do in the world, in spite of all these challenges.

CS:  What challenges and trends worry you about the future of social change, feminist work, and queer liberationist work, and what are you hopeful about?

RW:  Challenges – well it’s not that the forces that brought Trump and his ilk to power were not in place for many years, but actually seeing what damage they’re doing and how they’re setting us back is really sad and troubling. Obviously, this puts so much pressure on current movements. We can’t burn ourselves out. Sometimes it feels like we’re being harder on ourselves and our allies, just because there’s so much at stake and so much to do. Any time we’re feeling like it’s so challenging and hopeless, we have to figure out how to keep the long game in our sights and keep working together.

I do feel hopeful about the ways this recent election has galvanized people, and re-energized a lot of folks who had maybe been sitting on the sidelines but aren’t any more. They’re out there protesting, educating themselves, working to change the system. I feel hopeful to see a lot of younger women getting involved in politics, gearing up to run for offices on all levels. When it comes to feminist and LGBTQ+ struggles specifically, I see us moving forward (sometimes two steps forward, one step back), and I see that the next generation has so much more knowledge than I did at that age. Which I think is a good thing! Overall I feel hopeful that we will learn from each other and work together across generations and many differences. We have to keep fighting!