Reasons for a Rapture

A couple weeks ago, I saw a series of billboards a near my house so strange that they warranted a Google search. In almost no time, I found that these fiery displays, threatening the end of days, belonged to Harold Camping, the almost 90-year-old Family Radio preacher who was certain that God would make his final judgments last Saturday. 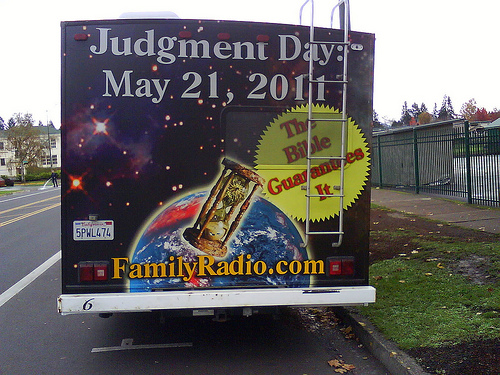 With the exception of his few loyal followers, Camping was probably the only one of us who was disappointed when he opened his front door Saturday morning and realized the world wasn’t enduring any sort of rapture. After a weekend of silence, Camping emerged from his California home Monday to concede that the 21st was simply a “spiritual rapture” and that the world will really come to an end this October.

Now, I like to think I am fairly well-versed in Christianity, and though I may disagree with much of what many prominent Christians preach, I can usually understand how they came to have these beliefs. Camping’s date setting, however, raises a lot of questions for me.

For me, it is not a question of whether or not it is ethical to believe in the rapture. Rather, I think it falls in line with the ethical question behind missionary work and religious conversion. As a non-believer in Camping’s predictions, I wonder what he – and his followers, for that matter – gain from something like a rapture campaign.

It brings to mind a Susan B. Anthony quote: “I distrust those people who know so well what God wants them to do because I notice it always coincides with their own desires.”

Camping’s predictions seem to be Calvinist in nature; he believes that God has a set date for the end of the world, and He has already chosen a select few, approximately 200 million, to be taken into heaven that day. If there is no possibility of changing your own fate or the fate of the world, what use is it to warn the larger population about the rapture? Making a last-minute attempt to spread the word of the “awesome” news by plastering vans and billboards with threatening advertisements would not save Camping’s followers – or potential converts – from their preordained destinies.

Camping’s Calvinistic beliefs do not appear to align with his decision to spend over $100 million on a campaign. For this reason, I can’t shake the feeling that he will get some personal gain – other than a ticket to heaven – out of this.

Ostensibly, if the world is coming to an end, money shouldn’t really matter anymore. However, some people actually quit their jobs and handed over their life savings to Camping to support the campaign, which he has not yet refunded even though May 21 didn’t play out as expected. He said to the New York Times, “We’re not at the end, so why would we return it?” But what happens in October; assuming that once again his prediction is inaccurate and life as we know it does not come to a screeching halt, will he return the money, then?

Additionally, the number of Camping’s believers – and future donors, consequently – has probably increased pretty heavily in the past few weeks. I’m fairly certain his radio station’s ratings have also spiked dramatically, with both believers and staunch non-believers tuning in to hear his apocalyptic rhetoric.

As he has for decades, Camping can continue to postpone the end of days every several years – given that he lives to see the next one – and re-heighten his visibility throughout the country, exponentially losing credibility with each prediction. Camping’s PR aide, Tom Evans, in my opinion, had a more reasonable response to Saturday’s uneventful non-rapture, unlike Camping’s floundering explanations and re-calculations.

The Atlantic reported that Evans said to Reuters, “You can imagine we’re pretty disappointed, but the word of God is still true… We obviously went too far, and that’s something we need to learn from.”