Questioning My Identity as a Woman in STEM 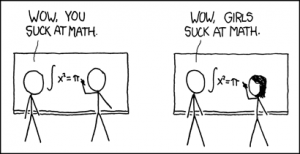 I am finally going through the stereotypical major-identity crisis. I no longer want to be a math major.

I was good at math in high school. I was “that” girl who took pre-calculus and AP calculus a year early, two years for which I was affectionately called “sophomore”. Math was my thing. Of course I wanted to major in math…even though I wasn’t exactly sure what a degree in math entailed.

The uncertainty did not deter me though. I enrolled in Math 221- Linear Algebra for math majors, and I hated it. I didn’t enjoy the professor’s teaching style, I struggled with homework, I barely understood office hours, and I almost failed both midterms. (But after 14+ hours in the Art Carrel Room in Lilly studying for the final, I survived the class and passed!)

Having spent hours studying, swallowing my pride to ask for help, trying to understand the professor’s explanations, and calling Dad multiple times for pep talks, you would think that I would have realized math wasn’t for me. Nope.

On to Math 222 instead, with my first female math professor! It was the first time I saw someone I considered “normal” within Duke’s math department. I have this internal image of the math majors and professors as the stereotypical nerd, so seeing a female professor who was more than socially competent broke that image. I found a “Woman in STEM” I could identify with, and I started to try on that identity.

When I met someone new, it was “Hi, I’m Alex.” “What’s your major?” “Math.” In that one word, my identity became my math major, my future as a mathematician, and being a Woman in STEM. I was breaking a stereotype and proving that a normal girl could major in the utter terror that is mathematics at Duke.

Now let’s fast-forward to today: I am taking two math courses (Differential Equations and Probability) and Microeconomics. The math classes are exhausting me and I’m simply not enjoying them, whereas I love econ even when it’s challenging. Which raises the question: What if I didn’t major in math? I’m not enjoying it. I’m not doing exceptionally well in it. I love econ. I am doing well in econ. Why not just major in econ and minor in math?

The last thought produced dismay. I can’t minor in math! I am a math person. It’s who I am! Everyone knows me as a math major. I’m proving that “normal” people can do math. I am proving a woman can do math…Right? Don’t I have an obligation to maintain my identity as an extroverted woman in mathematics? My identity here is a minority identity. Don’t I owe loyalty to this minority? Couldn’t shucking this identity be a disservice to all those who came before me and all those who will come after me?

The answer, I discovered, to all of these questions is no. I don’t have an obligation or a loyalty. I am not so powerful that I can disservice other women in STEM. No one asked me to be the martyr for Women in STEM. How could I even be a true advocate for Women in STEM when I don’t love math? No one has asked me to do anything except to be as true to myself as I can.

As a college student, being as true to myself as I can means trying on different identities. If the math identity doesn’t fit today, there is no reason to force it. But tomorrow, if after talking to one of my favorite math professors, the math major identity does fit… who is to say I won’t be a math major again in the future?