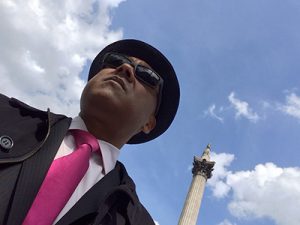 Suzanne Katzenstein: Where were you born and where did you grow up? What did you major in, and what extracurricular activities did you do?

My family moved to London when I was 7 (and of those 7 years 3 were already spent in the UK while my father did his Masters). Hence my school and university years were all in London.

I was at Dulwich College from primary through to A-levels (17/18 years old), then at the Architectural Association (AA).

I was a stereotypical geek at Dulwich. I played chess, Diplomacy and Risk in my lunch hours. My focus was the sciences, being particularly adept at biology and organic chemistry. I was a passable physicist and mathematician, usually being confounded where actual numbers were concerned, but perfectly fine if things were algebraic. I suspect I probably was/am a little dyslexic as far as numbers are concerned, and I generally had a hard time understanding why there was only one ‘answer’ in basic mathematics. Things got much easier later when I realized that there actually isn’t, ever. To counter the empiricism of the sciences, I did religious studies, meteorology and geology in my spare time (I know, pretty sad). When it came to exam time I remember sitting in the vast gym alone except for one other guy doing O-levels in these obscure subjects. (That other guy is now a biochemist in Austin and chases twisters in his spare time.)

Joining architectural school was a leap. I was actually prepped for medical school, as should all first-born Asian males, but had a teen rebellion and ‘negotiated’ with my father. I really wanted to be a graphic designer and head into advertising/public relations. We compromised on architecture because my father pronounced “it involves drawing but it’s a real profession.” I didn’t argue, but it was an issue to get into a regular university because it was already past the application period (now July for a September start), and I didn’t actually have any design-related curriculum work to show from Dulwich.

Fortunately the AA agreed to interview me. The AA is somewhat like Cooper Union. It predates the Royal Institute of British Architects, so (at that time) it didn’t confer degrees. There were no exams or classes. The qualifications were/are ‘recognised’ by the profession. There is an intense competition between students, of whom there are only about 200 in the whole school at any given time. At the end of any year it’s simply pass or fail based on a jury of 12, six from faculty and six from practice. Did I already say it was intense? I recall at my own interview the head of school agreeing to take me because I didn’t have to ‘unlearn’ anything. I was basically a blank slate with some fundamental knowledge on the natural sciences that had not been ‘poisoned by design dogma’ on what architecture is.

The ‘reality’ of the AA experience, which was essentially being thrust into private practice from Day 1, built resilience and a broad awareness of everything that is possible. Being nurtured in the connectivity of things, working side-by-side with “starchitects” such as Rem Koolhaas, Zaha Hadid, Richard Rogers, Jean Nouvel (all of whom were personal tutors at one point or another), provides a certain perspective on what one is put on this earth to do. Change it for the better.

SK: Do you have siblings? Do they or your parents work in a similar field as you?

PS: I have two younger brothers (again, competition abounds). One is an investment banker (Singapore/HK), the other in radio/TV production (Malaysia/Asia).

My father was a civil servant at the Prime Minister’s Economic Planning Unit in Malaysia during the late ‘60s. We moved to London in 1976 when he joined the Commonwealth Secretariat. We stayed in London when he then moved to the UN and was posted in various locations, ending up in NY. So, yes, the UN has always been in my system. I recall one trip we took with my dad when I was 16. He was UNDP Resident Representative in Indonesia. We drove from Jakarta to Bali across Java stopping at every UN-supported project: volcano monitoring, shrimp farming, preservation of Borobudur, women’s handcrafted batik, shadow-puppetry cultural promotion, farmer capacity building, soil nutrient mapping, shipping coordination, tourist development, etc. It was a revelation. Deeply, deeply compelling.

SK: When did you first become interested in corporate sustainability issues and human rights? Was this something you studied in college, were interested in before, or did it emerge later?

PS: I cannot pretend to have had a particular interest in human rights, or indeed social issues generally, until I was confronted by risk management needs in the private sector. I suppose I was always interested in systemic balance, elegance of system design and optimization of resources. Good architecture demands respect for space, utility, environment, context, relevance and beauty.

The first hit with human rights came when I had to prepare a position on slavery in modern-day plantations for the Board of the company I was with (2008). I then found out that the Chairman of the Board had previously been the Chair of the UN Commission on Human Rights when he was Malaysia’s representative to the UN. I met with him and he advised me to steer clear of the international bureaucracy, but I wanted “to take some time off” to explore the arena so I could then go to one of Ruggie’s stakeholder consultations (in Berlin) and he would consider it a paid vacation. And so it began. I then evolved the slavery paper task into a code of practice for the industry and established various human rights working groups for business in Malaysia and the ASEAN region.

SK: How did your interest in corporate sustainability and human rights evolve over time and what drove this evolution?  How is it that you went from designing townships, to working on internet issues to then sustainable development in agriculture?   Was it being open to new opportunities and serendipity, or was there a more specific logic linking corporate responsibility/sustainability across these sectors? Lastly, how did you end up involved in projects in Mozambique and Malaysia?

PS: Opportunism and boredom are potent drivers for personal growth. In my own mind I have never stopped being an architect. I have simply applied basic skills of spatial management and resource optimization to different systemic conditions – whether designing townships or coding software, negotiating contracts or defining agricultural value chains, developing inclusive business models or global governance frameworks. It’s all about clarity and purpose, with a (very) occasional foray into compassion.

When I was developing e-Government solutions I was part of a South-South cooperation programme hosted by the Malaysian Government for African Governments. Every alternate year we would have a ‘Langkawi Dialogue’ (named for the resort island where it was held) and most African heads of state would attend with delegations. It was at one of these that I met Lidia Brito who was Minister for Higher Education, Science and Technology in Mozambique. She noted that the World Bank was about to start a programme to draft an e-Government strategy for the country. She mentioned that the WB team didn’t have anyone from an actual developing country on it, and they were interested in Malaysia’s own leadership in this area. I went to Mozambique in the week following and she appointed me to the programme. Over the course of 2 years I spent about 4 months cumulatively in Mozambique. As it turned out, they retained my personal services after the WB contract and I ended up drafting the final recommendation that was centered upon a ‘Right to Information’.

The differences between Malaysia and Mozambique are vast for many reasons – not least that the developmental perspectives of the former are based on sustained growth for several post-colonial decades, and the latter being mired in civil war and strife for so long. I think rather than just these two countries, I have worked in over 35 countries on various projects, and it is the commonality of issues and concerns that appears more profound. The need to chart a continuum of development, understand the nature of leapfrogging or taking countries to higher states of charge (like particles) so they can accomplish more, avoiding linearity, appreciating eco-systemic balance, these are things which multilateral systems should be focused on. I am less enthralled by the idea of interventionism (i.e. aid), except in the case of disaster relief.

My focus now is to de-sensationalize the changes that are inevitable and accordingly ‘acculturate’ actors to their changing roles.

PS: Regardless of the public/private perspective, I am fortunate enough to have been able to develop and deliver ideas that are appropriate and of use to both. The landscape at the level from which I see things is remarkably consistent between the sectors. The differences are clearly in legacy and capacity to implement. The private sector is poised to a degree of effectiveness that can hardly be appreciated by the public sector. There are also conceptual issues of governance, legitimacy and perceived substitution or negation of roles that cause friction – but ultimately these are irrelevant and timewasting. There is no question that the solutions we need for a better, more equitable planetary society are a smart mix of government and corporate action. The most rewarding outcomes are where we set up effective relays, with the baton being passed from actor to actor at different points of value, geography, context, and efficacy. The most challenging aspects are the presumed territorialities, the pervading senses of entitlement, and uncompromising reactionary stances – and these attributes are equally applicable to governments, companies and civil society actors. The task of rearranging furniture on the Titanic is one that occupies too many meeting rooms at too many levels.

SK: What has been one of the most memorable moments you have had in your career so far?  Is there any one whose work inspires you, and if so why?

PS: Every waking moment inspires me to do more. I am very grateful for where I am and deeply appreciative of all of those who have, and continue to, enable me.

SK: What are the next steps that the UN should take to improve corporate responsibility/sustainability? What about multinational companies? How can we align the incentives of companies with the public good, or have the two be mutually reinforcing?

PS: I think the UN needs ‘to find itself’, perhaps by consolidating its value under the ‘honest broker’ mantle. It can be a global ‘life coach’ for the engagements and interfacing that has to happen between actors (whether government, business or CSO) as they grow into their better selves. The UN should be the antithesis of scaremongers on any subject. Yes, population is exploding, yes, climate is changing, yes, conflicts are escalating . . . but we need to keep sight of the objectives and work toward them, especially when we know they may not happen in our lifetimes. The UN is that platform.

SK: What drives you or angers you in working on these issues?

PS: I am driven when I am told that the right thing cannot be done for reasons that do not suggest that it is the wrong thing to do. Getting those things done brings particular joy. I very rarely get angry —if ever it is because people are not passionate about things they profess to have an opinion on. If you say you care, then do something about it. I have no problem with people who genuinely do not care.

SK: What advice do you have for undergraduate and graduate students who want to work in this area?

PS: Don’t be afraid to say that you’re going to change the world.