PETA doesn’t beat around the bush. Rather, it is generally quite outspoken and direct about our questionable animal practices. And it doesn’t shy away from provocative advertising tactics, often with the help from scantily clad women. 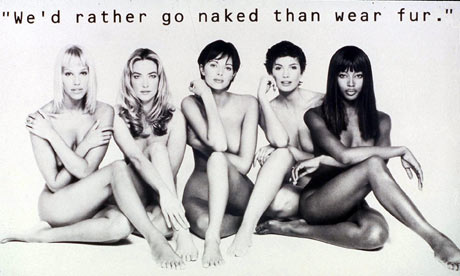 But it seems like the folks at PETA are kicking it up a notch. NPR reports that PETA is planning a website that will “feature ‘tantalizing’ videos and photographs” (read: pornography) leading to its usual animal rights messages. Never mind that “tantalizing” summons up images of that medium-rare filet mignon oozing with the last drops of life force, it’s easy to see why this new initiative is questionable. The obvious objection is that using an immorality to promote an ethical viewpoint reeks of hypocrisy. Moreover, from a practical standpoint, this new enticement is bound to be a turn-off for “mainstream” audience, adding further to the perception of PETA as a fringe movement.

But are there really no justifiable reasons to put naked bodies on the line for animal rights?

Consider this: if one PETA argument is that humans and animals are really more alike than different, then what is more effective an illustration than human bodies eliciting and performing what are often called our most animalistic desires? Also, PETA’s new idea could function as a sort of meta-critique. If the public finds pornography objectifying, exploitative, disgusting, grotesque, and—in a word—offensive, then why wouldn’t it harbor the same sentiment toward the literal eating of animals, among many other evils that humans perpetrate on animals? Here the opponent would argue from the alleged differences between humans and animals, to which the PETA advocate could point to the juxtaposition: naked human, naked animal, wherein lies the difference?

Of course, opponents can point to cognitive ability as the decisive line between humans and animals—an old argument now. And maybe all PETA is going for with the new website is mere provocation, rather than some weird postmodern argument. But it suffices to point out the inextricable relationship between morality and the regulation of desires, regardless of which indulgence one prefers.