Paving the Way for Women in STEM 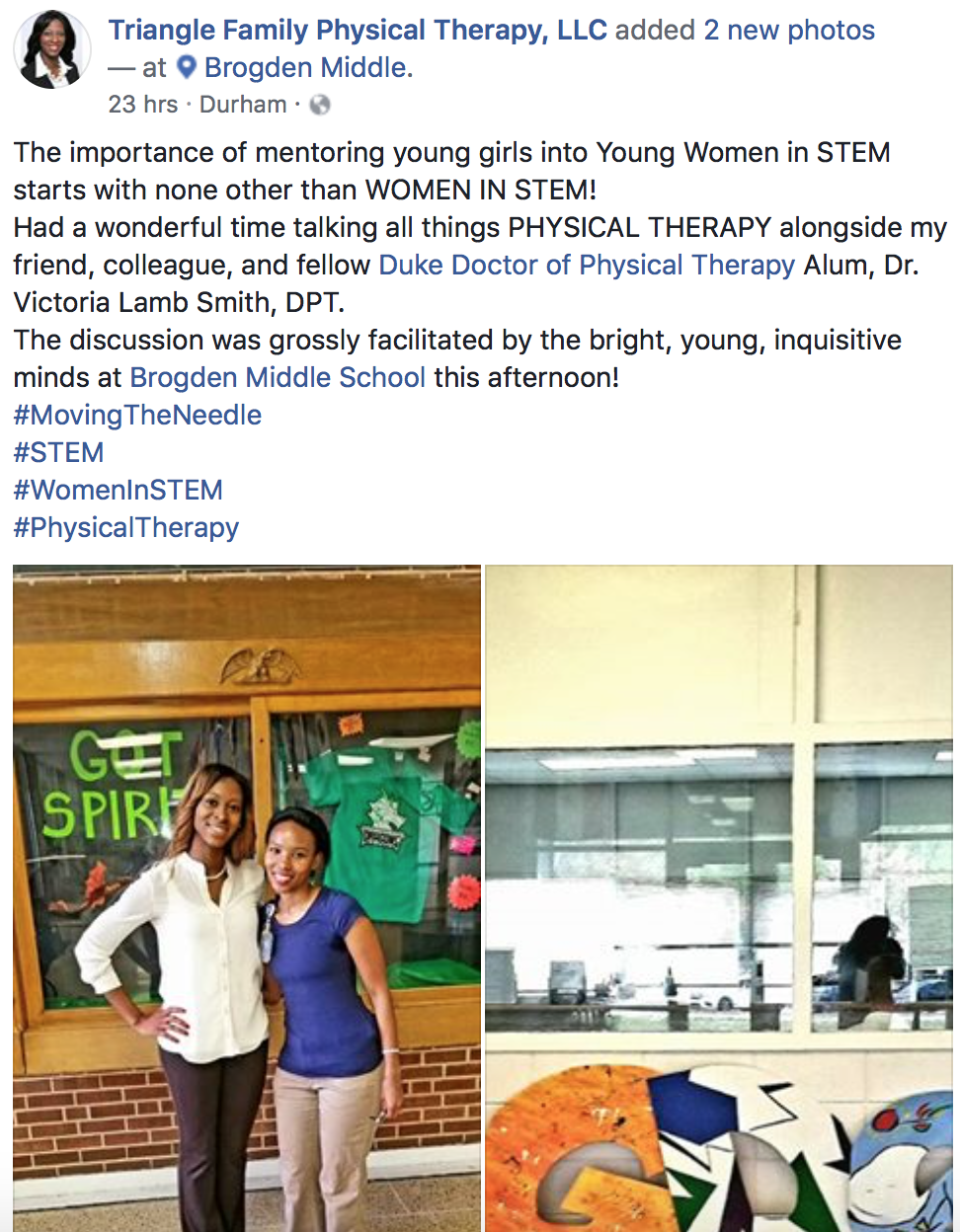 Dr. Victoria Smith and Dr. Moyo Tillery, two Duke Doctor in Physical Therapy Program alums, came and spoke with the eighth-grade girls at Brogden Middle School this week about their careers as physical therapists.  Dr. Smith both practices pediatric physical therapy and serves as a clinical instructor at Duke Hospital, and Dr. Tillery owns a private practice in Durham, Triangle Family Physical Therapy.  Since many of the young women in the group are interested in pursuing careers in medicine, and one young woman expressed a particular interest in physical therapy, I think that they were excited to meet the doctors and learn about their careers.  Similar to many of the other guest speakers, such as the founder of Bull City Escape, Alice Cheung, and Assistant District Attorneys, Ameshia Cooper and Patricia Flood, Dr. Smith and Dr. Tillery not only answered questions specific to their profession, but also served as mentors, sharing their advice for achieving a successful and fulfilling career. Moreover, as physical therapists, Dr. Smith and Dr. Tillery also provided critical representation for women in science, technology, engineering, and mathematics, STEM, areas in which women are often inadequately represented.

While the representation of women in STEM is overall lower than that of men, interestingly, physical therapy is a field that was founded by and is still predominantly comprised of women.  Following World War I and the polio epidemic, the most modern practices of physical therapy began in the United States.  Reconstruction Aides, who were exclusively women, provided exercise-based treatment to wounded soldiers and disabled children.  In 1921, just one year after women across the nation were granted the right to vote, reconstruction aides founded what is now known as the American Physical Therapy Association; thus, institutionalizing the practice of physical therapy.  Men, however, did not enter the profession until more than a decade later.  Today, although women comprise about seventy percent of the profession, men own private practices, typically a more lucrative sector of physical therapy, at approximately twice the rate of female practitioners.  Furthermore, men are disproportionately represented in director positions in physical therapy education programs. I wondered why women are disproportionately underrepresented in what some may consider to be the more superior positions of the profession.

I thought that having Dr. Smith and Dr. Tillery speak with the girls about the beneficial and life-changing treatment they provide every day for their patients was extremely inspirational.  Furthermore, as an educator and as a private practitioner, Dr. Smith and Dr. Tillery are both leaders in areas of the profession in which women are typically underrepresented.  During the meeting, Dr. Smith and Dr. Tillery graciously provided their mentorship and guidance, encouraging a younger generation of women to achieve their goals in STEM or whichever field they may eventually choose to pursue.