“Learn to recognize omens, and follow them” -The Alchemist by Paulo Coleho

I found myself waiting on the side of the road with my two Israeli friends. It was hot, and I was incredibly confused. My friend stuck his thumb up and reached out into the road, seemingly awaiting a car to pass with a few empty seats. Then it clicked: we were about to hitchhike. And, all I could do was stand there quietly stunned with the shock of reality.

Twenty minutes earlier my two friends came into my room and convinced me to come “tremp to a nearby natural spring” with them. They had sliced watermelon (my favorite fruit) and cold drinks in their arms and smiled invitingly. At the time, neither my friends or I had any idea what “tremp” meant in English, but their encouraging smiles sparked my curiosity enough for me to agree to come along. For the entire summer I had been living by a motto one of my mentors recommended: “say yes, unless it is illegal.” And, by this particular point in the summer, that motto had already led to many incredible memories. Using this motto as a guide, I trusted my two friends enough to know that they wouldn’t tremp if it were illegal, so without inquiring further and opening a Pandora’s box of translation issues, I agreed to tag along. We began walking until we found ourselves on the side of a road basking in the Middle Eastern midday sun. There was no plan, no ride and no natural spring in sight. While my friends seemed fine, I was silently panicking.

Suddenly, my friend who was wishfully sticking out his thumb into the hot, dry air turned around and matter-of-factly exclaimed that “typically when I tremp there are only one or two open seats in the car, so we will likely need to separate.” For a brief moment, I felt my silent panic evolve into a shout of fear, frustration and utter shock. I had unknowingly agreed to go hitchhiking to a nearby spring that I now doubted even existed, and I was about to have to separate from my friends to travel with some stranger?! No way! I was about to crack, but I just barely managed to maintain my composure, irrationally trusting in the universe and believing that it would all work out.

Less than five minutes after my friend’s exclamation, a car passed by and seeing my friend’s thumb slowed down with its window open. A brief exchange in Hebrew between the driver and my friend resulted in my friend inviting us all into the car. Apparently, because my friend and the driver happened to be from the same small town in Israel, the driver was more than happy to take all three of us to the nearby natural spring. I thought what were the odds of that happening? It was nothing short of a miracle. 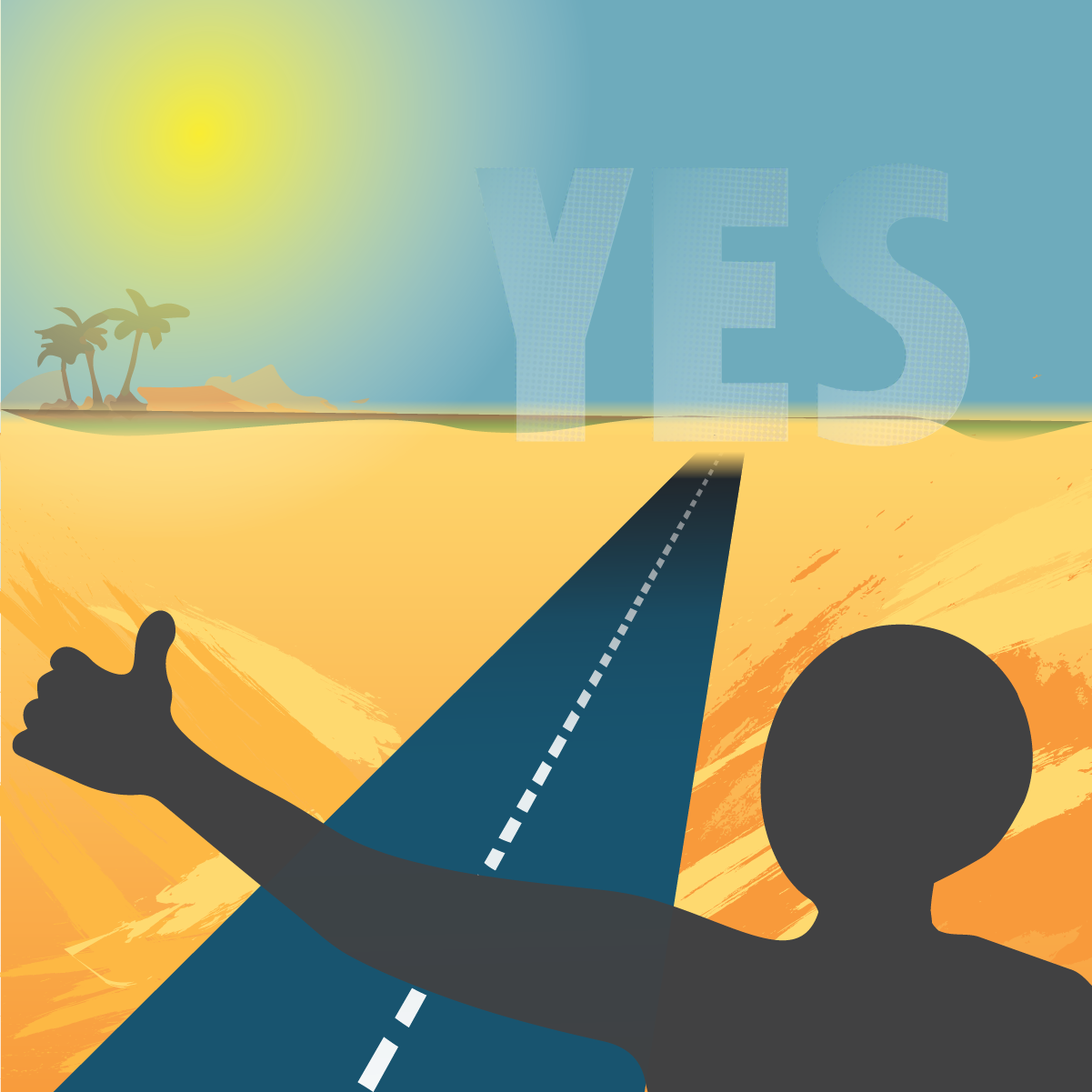 There are moments in life that the entire world seems to create the impossible. Our environment bends to our will and the path of least resistance merges with the path of purpose both sweeping us along for the ride. This was one of those moments. Paulo Coelho famously writes “when you truly want something, the entire universe conspires to help you.” This summer helped me appreciate what he meant.

I sat in the back of this stranger’s car still in shock and began reflecting on the motto that guided my summer and led me to my current circumstance: “say yes, unless it is illegal.” The first thought: this motto is incredibly risky! How could my mentor ever live like this! There are a lot of legal things, like tremping, that it may be much safer to say no to. But, I also realized this motto, despite its riskiness, had successfully led both my mentor and I to some of the most memorable and enjoyable experiences. I needed to further investigate how to balance risk with reward.

The car came to a halt and we exited, thanked the driver and began our trek on a small path enclosed by barbed wire on each side that, according to my friend, would lead to the natural spring. I recall this walk all too well, as all I had to distract from the heat were my thoughts about the motto. Say yes unless it is illegal is not just about risk, it is also about trust. Living by the motto places trust in the world to work things out requiring faith in what Coelho describes as the universe and an understanding of what he describes as omens. I began to wonder what some of the other omens were in my life and if I were listening to their messages.

My friends’ excited clamor woke me from my thoughts. I lifted my head and saw a beautiful small natural spring with birds and a few locals enjoying the fresh, cool water. I smiled the same smile that my friends had earlier that day. One friend turned around and whispered to me “this is what I call a victory.” He was right. It was a victory because I had followed my omens and they led me to this moment.

In this victorious moment, I made three promises to myself: 1. I would search more actively for omens in my life and follow them, 2. Save any extreme circumstances, I would never hitchhike or tremp again, and 3. Going forward, I would ask for more English translations!