Old Houses and the Ghost of Silence 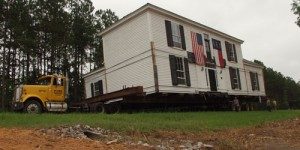 Growing up in a small, Southern town, I’ve always been around old houses. My favorite of these was my granddad’s. A two story monstrosity with massive ceilings and wide plank flooring. The glass in the windows had a rippled texture because that was the closest the manufacturing process at the time could achieve to clarity. A framed newspaper in the bathroom had a small picture of the house with a few other area homes, which bore the headline “Houses for Which War Was Fought Still in Bladen County.” I should clarify; the war the headline is referencing is the Civil War. It’s a very old house. I spent countless hours there sliding down the wide balustrade or hiding in one of its many rooms with my cousins. We didn’t hide in the room that was rumored to be haunted by a Confederate ghost though—no one wanted to risk it. Recently, we sold the house and it’s felt like another loss after my grandfather’s death. That home had become the epicenter of my family and redefining that sense of place has been a challenge.

I couldn’t help but dwell on my own history with old houses when watching Moving Midway the first offering in our Ethics Film Series last week. Made by film critic Godfrey Cheshire, Moving Midway tells the story of his cousin Charlie Silver deciding to literally pick up and move his family’s antebellum plantation home to escape the encroaching spread of suburban development. In the process of making the film Cheshire finds and connects to a branch of his family descended from the slaves of the Midway Plantation. The film traces the literal journey of the house and the figurative journey of a family that finds their identity being fundamentally reshaped. Inherent in the film are questions about history, place, and identity. What does it mean to be Southern? What do we owe to history? How can we begin to make sense of and discuss slavery today? In some ways it’s this last one that got the least attention (though perhaps deserved the most) in the film. I won’t consider this a fault of the film, it would be impossible to cover all the material the story offered, but I found myself still mulling the issue over days later.

The question of engagement with the history of slavery really stuck with me after this film and the discussion. I found myself wanting to accept the surface story. I found myself wanting to feel a sense of closure and joy watching 96-year-old Abraham Hinton, the grandson of one of the plantation slaves sign the Midway guest book. I wanted to revel in a moment of great personal significance for a man whose incredible life’s recognition is late, but nonetheless worthwhile. I also know that while metaphorically powerful, that pen stroke does not create parity. Growing up in Southern schools, where my parents were taught about the Civil War as “The War Between the States” or even better “The War of Northern Aggression,” and it was emphasized to me that slavery was only part of the myriad of reasons for the Civil War, I don’t know that I’ve ever had a frank conversation about slavery and its shockwaves. I had relegated slavery as a horror lost to time whose effects could certainly be felt, but were not always present. I felt a sense of overwhelming (and obviously self-indulgent and useless) guilt at this revelation last week. I say this in the full awareness that I’m not adding anything to the dialogue, but rather recognizing a dialogue I wasn’t taking part in.

And while it’s not a solution to properly historicize and recognize any sin of human history, confession is a first step. I think it’s necessary that I dismantle my own sense of undiscussable horror to delve into the reality of history’s woes in order to understand them better. Because glossing over humanity’s downfalls underwrites their importance, and becomes a downfall of my own. Maybe the ghosts that haunt old houses are the ghosts of silence.