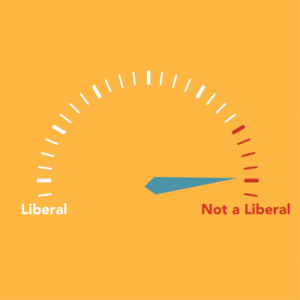 Last week, I spotted an interesting bumper sticker at a stoplight. It’s not unusual to see a political slogan emblazoned across the back of a pickup truck. But this particular message surprised me, and–frankly–confused me.

“NOT A LIBERAL,” read the sticker in bold, red, capital letters. It was clearly an important message.

I understand that the driver of the truck must have very strong feelings about politics. Lots of people do. He wishes to broadcast his political ideology to strangers. That’s unnecessary, but not uncommon.

What was strange, however, was the syntax. Not a liberal. I was immediately struck with several questions: Who is not a liberal? Is it the truck? Is it you? Did someone imply that you were a liberal? Why do you feel the need to make such a clarification?

But the question that lingered longest in my mind was this: Why express your political identity in negative language? Why declare your position in terms of opposition?

After all, this choice is an ineffective advertisement of one’s ideology. For the sake of clarity, the driver could have applied a sticker that simply reads “CONSERVATIVE.” Then there would be no doubt about his views. But the vague message on the the bumper sticker left me with only an incomplete understanding of his political views: he is not a liberal.

He could be conservative, but he could also be a libertarian. Or even a socialist. To be sure, I think one of these choices is the clear favorite – but the point is, we don’t know.

The absence of any other political stickers suggests to me that the driver might consider the statement a sufficient summation of his views. Perhaps he actually thinks of himself as a Not a Liberal. Maybe he sees the political spectrum not as a gradient, but as a two-sided coin painted red and blue.

Or maybe he just really doesn’t like liberals. But the question remains of why he feels the need to announce himself as that which he is not.

I don’t wear t-shirts that say “Not a Mathematician.” I don’t introduce myself as “Clayton, who hates cherries.” Nor would I get a tattoo of a Keith Urban with a circle and line through him.

The only time I feel the need to voice my aversions is when I am surrounded by them — when they are pressing against me. I would quickly complain if I had just taken a math test. I would turn down a slice of cherry pie for something else. I would change the channel on a country pop song. I tend to declare that I do not like things in instances where I need, in a sense, to defend myself against them.

I wish I could ask him what motivated the purchase, but he sped away as the light turned green. The Not a Liberal left me with not an answer.