European histories have traditionally marginalised the Jews, whilst Jewish history has mostly told an exclusively Jewish story. Professor Malachi Hacohen sets out to redress this through an ambitious, panoramic attempt to offer an alternative Jewish European history that reintegrates the cosmopolitan narrative of the Jewish intelligentsia with traditional Jews and Jewish culture. He argues that for traditional Jewish culture to become part of European history, the rabbinic culture of Talmud, Midrash, Kabbalah and responsa must be “Europeanized” and Jewish European history written out of traditional Jewish sources. The book’s starting point is the biblical story of the rival twins, Jacob and Esau, and their struggle for primacy. Professor Hacohen charts how Jews and Christians reconfigured this narrative to address changing Jewish–Christian relations and the Jews’ place in Europe. The book’s goal is not to establish a unitary narrative but to chart two divergent but intersecting Jewish histories that together represent the plurality of Jewish European cultures. 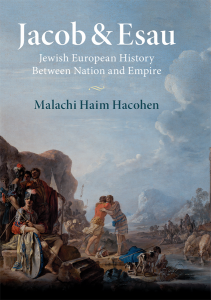 We are witnessing an unprecedented enthusiasm for the rabbis among academics. This book reflects my own coming to terms with the rabbinic legacy of my youth, through a postorthodox convergence of rabbinic and liberal culture. I grew up in Israel in a traditional Jewish milieu.  I departed from it when I arrived in the US to study liberalism.  Now I have reforged my relationship with traditional Judaism, butas a historian with a mixture of distance and enchantment. My fascination with rabbinic culture may leave some readers wondering why I am not in a yeshivah, reasoning that Marx, Popper, and other apostates may be read there more avidly than on most campuses. No way! I have enjoyed the academy too much. The Jewish Sages envisioned the time when Judean princes would be teaching the Torah in Roman circuses. I am, as my name attests, from priestly rather than princely descent, but I have always taken great joy in teaching Torah in a well-run (and civilized) Roman circus. So I am here to stay, and, indeed, I have joined the Kenan Institute as Director of Religions and Public Life. I am grateful to the Director, Suzanne Shanahan, for organizing a book workshop that brought together a community of scholars and friends interested in the message Jacob & Esau may have for our world.

pre-order the book  or available now in the UK