“Neither Quick nor Linear”

If you want to go on an adventure in plain sight on a Tuesday, you must first tell yourself it is an adventure. Hitch a bus from Smith Warehouse and sit in the very back, on the right, where you can rest your legs, fully extended, on the metal crossbar. Feel the weight of your body brace the window as the bus turns left; stare at the unfurling greenery as you make your way to West Campus. You make notes in your notebook under the heading, “To West on a Tuesday.”

The history of LGBTQ activism, advocacy, and acceptance at Duke was “neither quick nor linear,” as an information plaque in the Perkins Gallery tells you. This is part of a new exhibition—Queering Duke History—curated by Denzell Faison, who graduated this past spring. This is the exhibition you travel to West Campus to see. It’s about the history of queer activism at Duke; it’s about, as Faison says in his curatorial statement, “refut[ing] the prevailing theory that Duke University never actively discriminated against LGBTQ individuals.”

The exhibition feels both introductory and comprehensive; accessible, but chock-full of deep cuts—Chronicle editorials, banners, “Coming Out Party” flyers—from the Duke Archives. There are photos of impassioned student protestors and there is a hard copy of Steven Petrow’s controversial 1990s Duke Magazine article on the AIDS crisis. There is a big red “rejected” stamp on a queer student group’s charter. 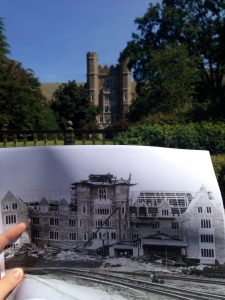 You come to West Campus, not for a class or a meeting, but in search of this exhibition—because you want to write about it, which means you want to place it within some larger conversation about the history of Duke and what Duke looks like now. You live and breathe what Duke looks like now, because you both went to school and now work here, so you focus on the visceral particulars. When you get off the bus on West Campus, you’re greeted by heat and negative space. Walking through campus on 97-degree days feels like a whole-body gulp of hot tonic. You take photos of the construction alongside Perkins and the Divinity School; there is no shade, due to the magnolia trees now being gone, but there is the chain-link fence and the excavated dirt behind it. There is the banner on the fake Gothic construction siding: “Coming Soon to Bostock: The Research Commons.” There is the mulch path you must now take to Perkins. A desire line you didn’t make.

Once inside, you walk around the Queering Duke History, which is arranged in a chronological circle. Some students walk through, en route to class, and bemoan loudly that they “hate how the [usual Perkins] entrance is closed.” Another stops and peers down into one of the glass boxes while talking on the phone in Spanish. You think about how maybe, now, the Perkins Gallery is an extension of the library’s commons, the sudden link between Von der Heyden and the circulation desk.

You think about your last interview in Dublin this summer, with a sociologist, in the rose garden at Trinity College. He studies the commons. He also, after the Great Recession, co-founded an online activist hub called The Provisional University, an “autonomous research project that emerges in response to the precarious conditions we find ourselves living and working in and a desire to transform them.” Their mission seems like a rebuke to the “tragedy of the commons”: its participants choose, in present circumstances, to collectively imagine better. They acknowledge what they’ve lost, but devise an image of how the community, the commons, could look different.

You think about how this particular exhibition seems timely: at the beginning of a new school year, in the face of campus’s changing facades, in this young university’s ongoing process of self-definition. You think that maybe, hopefully, others on camps are thinking similar things. But at some point you close your notebook and float out of the air conditioning and into the heat wave. You board a bus back to where you came from in the first place.