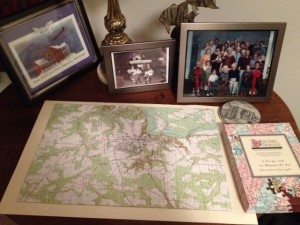 The day after Christmas my family sat hunchbacked over a card table, fitting together rivers and road signs as if our very understanding of place depended on it. We were doing a jigsaw puzzle together, but this one literally hit home. It was a “Your Town Your Puzzle” jigsaw that my mom gave my dad for Christmas—using the home address that she entered, the manufacturer put together an extract of a USGS map of the area surrounding our house. The finished product is pictured to the right. I know it’s small, but it should be pretty easy to see the evidence that I am indeed from a rural area! We poured over this thing the whole evening, completely absorbed!  Obviously we knew the layout very well in some sense. But this process of mapmaking clarified and solidified what I thought of as home.

I think it’s sadly an established fact that Americans are pretty bad with geography.  Maybe we remember most of the states (fewer capitals) that we learned in fifth grade, but placing the countries in Europe, Asia, and Africa…not so much. I’ll include myself in that category. But I’ve recently put a world map on a wall, and just give it a look here and there (brushing your teeth is an excellent three minutes to be utilized!) If you look at something enough, it starts to stick. The same was true with this puzzle of Murfreesboro and the surrounding county. I saw exactly how the creek on the Ramsey farm, which we grew up romping through, fed into the Meherrin River. The thick and thin and dotted lines marked the roads I’ve been travelling most of my life, but which I had never really visualized how they fit together.

How do maps change how we relate to our surroundings, both distant and familiar? It makes me wonder how much we really know about the landscape of our homes, and whether it matters. I probably will not go back to inhabit a dot on this map of Murfreesboro, my family’s home for generations. Along with being more transient, we are also more reliant on the technology of GPS. So, you could say, of course we know more. At any moment we can look up the exact location we are in, we are looking for, or we are merely curious about. GPS is a magical tool, but I think it is also perhaps dependency producing. When you look up directions, does anyone still look at a map, or even write down steps and then ingrain the route for future use, or do you simply follow that pin and accompanying voice on your mobile phone? Is it a problem that we do more consulting, but less remembering?

I shouldn’t downplay the level of sophistication that is employed with digital mapping, or devalue its merits, including accuracy. There are some really cool things being done with modern mapping. I guess a distinction that seems important involves the functionality of the map. What do we want it to show, and why do we value the particular map? Usually I want a map to show me where to go, and while the Apple Maps on my iPhone does that really well, the function is very utilitarian. (Although one can be innovative with the use—check out the way Kenan faculty Kieran Healy put Apple Maps to use recently). Road maps served the same utilitarian purpose in past years, which brings into question how different the concepts really are. Now road maps might seem somewhat of a relic of former times, and therefore considered in a different light.

This brings me to another function of maps, which I hesitate to call a function at all. They can be very personal representations of home and many can also be considered elaborate, fascinating artwork. The intricacy of design on paper maps fascinates me. The history of mapmaking is also rather astounding to ponder. Some of these thoughts are coming after viewing the Mapping the City exhibit now on display at Perkins Library. The curators say they are “challenging your perception of what a map is supposed to be.” I’ll continue from the introduction:

I hope you’ll explore these questions as I’ve been trying to this week. Want a few examples of alternate notions of mapping? This American Life featured a story a few weeks ago about five unique ways of mapping the world, using the five different senses. What struck me in these stories was the way very particular elements were drawn out of the milieu, sometimes layer by layer, to notice and appreciate. Even in the section on visual maps, which I would have expected to be the most conventional, the maps were anything but. Have you ever thought about mapping the light falling through the leaves of trees? The pumpkins on front porches in the fall? Graffiti?  Dennis Wood has done this in his neighborhood in Raleigh, and published what he calls a “narrative atlas” called Everything Sings. Other resources that have been pointed out to me in discussing the concept of mapping are related to the history and heartbeat of our city of Durham—Digital Durham and Open Durham.

So what’s the purpose of a map? A lot more than I thought. I wonder, what if we all tried to create a narrative atlas of our lives? What kind of maps would you use? What would they represent?  Would they help you get to where you want to go?