Q: Does competition bring out the worst in us?

One of my favorite New Yorker cartoons shows a guy in outdoor garb with a rifle strapped over his shoulder, sitting at a bar and having friendly drinks with a deer on the barstool next to him. The guy remarks, casually, “Hey, if we should meet in the woods and anything happens, remember, it’s just hunting.”

At the risk of sucking all the humor out of the cartoon by explaining it, it’s clear that the cartoonist is pointing to some peculiar tensions between the moral expectations we have when we occupy different roles. We have moral norms for being a good friend or even a good drinking buddy (e.g. you take turns buying rounds), but all of those warm, fuzzy values go out the window when we enter into an arena that involves competition.

The cartoon is obviously playing on the idea that some actions that would be considered downright nasty in ordinary contexts are permitted, or even obligatory, when what we are doing is “just business.” Similar rationalizations are used by opposing attorneys, politicians, and athletes.

In adversarial situations we routinely have to do things unto others that we would not want them to do unto us. A businessman will try to drive his rival out of business so that he can capture his share of the market. A political candidate will air attack ads that distort her opponent’s record. A boxer will literally punch his opponent in the mouth. So much for the Golden Rule!  But these actions in the real world of business, politics, and sports can still be considered ethically permissible. 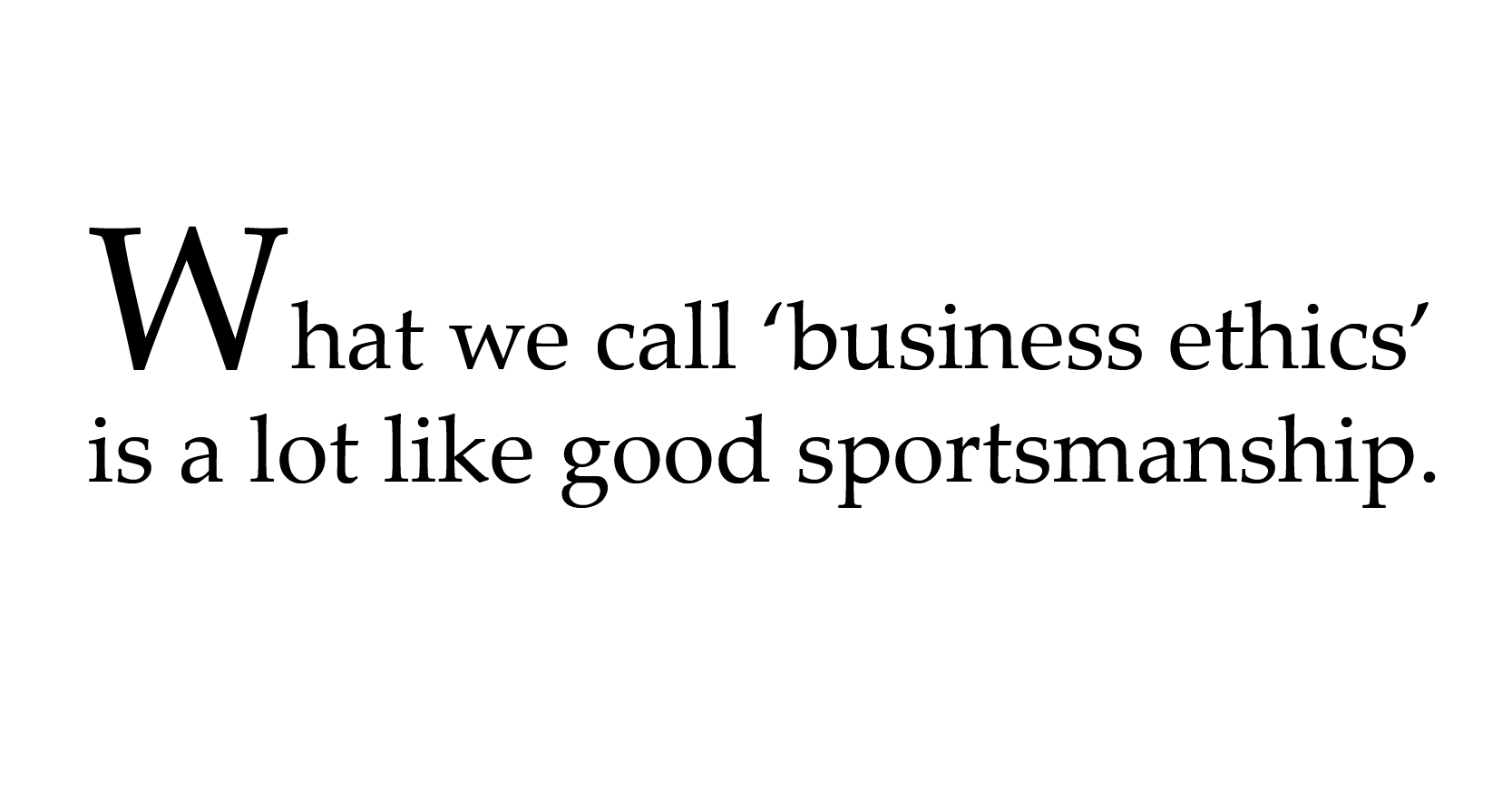 What the people in these roles have in common is that they are all players in highly structured competitions. In fact, the deliberately competitive situations that define their roles and relationships are among the most important institutions in the modern world—those of business, democratic politics, criminal law, and sports. And we find such institutions indispensible: free markets organize the production and distribution of goods, adversarial legal systems allow the accused to defend themselves, and democratic elections decide who gets to govern.

Of course, we are painfully aware of the shortcomings of competition. Companies may seek to profit by exploiting workers or polluting. Parties may win elections with lies and skullduggery.  Lawyers find loopholes that let guilty men go free, and some athletes take undetectable performance-enhancing drugs. We accept these “errors” in the system because we believe that these competitive institutions will still deliver better results for society in the long run.  To minimize these errors, we impose regulation—a complex set of rules along with a system of monitoring and enforcement—on everything from baseball to the market for mortgage-backed securities.

Rules and referees can’t catch everything, however. So in every competition there are further ethical norms that go above and beyond the rules, or that appeal to the spirit of the rules—we call this good sportsmanship, business ethics, professionalism, or statesmanship, depending on the setting. We admire the athlete who doesn’t fake a fall to be awarded a penalty shot or free-throw, but who instead struggles to keep his feet in an attempt to score. We laud the politician who refuses to exploit details of her opponent’s private life even if this is the only way she could avoid electoral defeat.

These “players” keep in mind the expectations of those outside “the game” whose interests these institutions and professionals are supposed to be serving. So while competition may not create saints, it doesn’t have to create jerks.

Rules of the Game

“When we’re asked whether something is ethical, our answer will usually involve taking a close look at how the action in question affects people’s well-being or autonomy,” says political philosopher and business ethicist Wayne Norman.

“Will it make people happier or make them suffer unnecessarily? Will it constrain or expand their freedom, invade or protect their privacy, diminish or enhance their control over their lives?”

This is not how all societies in history, or around the world, have thought about ethics, Norman argues, but it is the dominant mode of ethical thinking in the modern world, especially when we think about policies and decisions made within major social, political, and economic institutions. “Do they make us better or worse off, and do they distribute these benefits and burdens of our collective social cooperation fairly?”

Primed by a career spent in both philosophy departments and business schools, Norman considers that a big part of his role is “to subject both popular and academic ways of talking and thinking about business and politics to careful scrutiny. Ill-suited concepts and buzz-words can obscure our ability to see our way clearly through public debates about important issues.”

For example, corporate citizenship, stakeholder management, the so-called triple bottom line, sustainability, and corporate social responsibility are all “enormously popular ways to talk about what businesses ‘should’ be doing,” Norman says.

He argues that many people use these terms in good faith, but that they were all introduced recently into the vocabulary to help advance particular social and political causes. “The ‘bottom line,’ so to speak, is that they tend to hinder dialogue and make it harder to find agreement about how businesses can best contribute to the common good.”

“Ultimately what we’re trying to do is answer the question of ‘What are our obligations toward each other?’,” Norman says.  And he’s not above using novel ways to think through thorny ethical and political problems in search of an answer. Norman has gained insights about ethics within “deliberately adversarial institutions”—the market, law, electoral politics—by looking at the concepts and principles in another of these institutions—that of competitive sport.

“What we call ‘business ethics’ is a lot like good sportsmanship,” he says.  “And if we play or watch sports from an early age we realize that people can be ferocious competitors, but also gracious sportsmen who don’t cheat or disrespect their opponents. We should be wary of those who want to convince us that ethics must necessarily wilt in the face of real-world competitive pressures.”

He recalls learning many unwritten rules of good sportsmanship at his father’s side, during hours spent playing and watching hockey and football.  “We admired the ability of bitter adversaries to ‘leave it all on the field’ as they shook hands after the contest,” he says.  “I was taught to look up to players who didn’t cheat even when they could get away with it, and to be disappointed in the ones who were disrespectful to referees or were otherwise unable to control their tempers.”

“Great athletes, business leaders, and statesmen look beyond momentary setbacks and dubious opportunities toward lasting results they can take pride in,” Norman says. “They leave the world and the people they touch just a little better off.”