Q: How do you measure morality?

It helps to first define exactly what you are looking to measure. One way to pose the question is to think of what a person’s idea of a successful or good life looks like. In this sense, morality is not a constant or universal. Views on what is moral and what is not shift from person to person, from society to society. It’s also something people have a hard time articulating about themselves. If you present a group of people with a set of open-ended questions asking them to define their “moral worldview,” they often find it too difficult. This is because it is something they experience intuitively—it just makes sense. But people do have opinions on specific behaviors. If you ask people if a certain behavior is moral or immoral, they can usually answer with more confidence. Surveys help measure values or moral commitments by looking at the judgments or evaluations people make to fixed choices or dilemmas.

Answers to questions like these provide data which can then be measured and compared to help identify patterns. While some moral choices are very personal and based on individual experiences, many are shared by groups of people with similar views: political, geographic, cultural, religious, and so on. You may share some morals with a person but not others, and data helps solve the problem of how best to characterize those differences and similarities. It is easy to identify oneself through labels, such as being religious. But that choice alone, or even how often one practices that religion, is not necessarily accurate in predicting the depth of a person’s belief or level of commitment to specific religious or moral tenets. 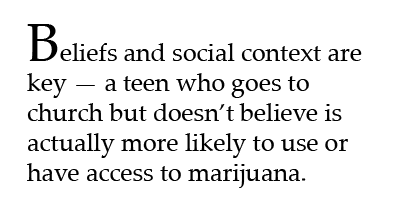 One of the reasons people have difficulty explaining their moral worldviews is because they tend to tailor their social circles to limit interaction with people who disagree with them or cause them to question their beliefs. If people’s viewpoints are obvious to them and the others in their social network, they have no reason to question themselves or articulate their beliefs. It reinforces the idea that their understandings of the world are self-evidently true.

Beliefs and social contexts can also combine in surprising ways. In one of my studies, I investigated why some teenagers began using marijuana while others did not. I found that those who attended church most frequently were less likely to use marijuana but only if their religious beliefs were important to them. Teenagers who went to church but held no strong religious beliefs were actually significantly more likely to begin smoking marijuana. In the absence of genuine commitment, their greater level of social connection provided them with more access to drugs than kids who didn’t go to church. Beliefs matter, but social networks and institutions provide a context in which people practice their beliefs, often without reflecting on them too much.

As an undergraduate, Stephen Vaisey envisioned a future in graduate school studying French literary theory. The gears first began to shift during a debate with a literary theorist while he was studying abroad. It was then that he realized how frustratingly subjective the discourse could be and thought “there has to be something better than banging my head against the wall talking literary theory, a way to have better answers.” With another year of scholarship availability, Vaisey added a major in sociology, attracted to the discipline’s use of data as a means to help adjudicate between competing explanations.

When he started his graduate studies in sociology, Vaisey again became frustrated, this time with what he was reading. The pervasive position in sociology was that people’s value commitments were not good predictors of behavior but rather post-hoc justifications of situational influences and social position. A first-generation college student from a conservative religious family in Upstate New York, Vaisey found these assumptions inconsistent with his observations: “there were things that seemed totally obvious to me that weren’t obvious at all in the discipline.” He has sought to correct those assumptions by drawing on research in psychology and cognitive science and by analyzing original data from longitudinal surveys and in-depth interviews to show how ideas and values shape behavior over the life course.

For Vaisey, the continued search for hard evidence to support his ideas is a way to bridge different viewpoints. Coming from a conservative, working class family to the world of academics, empirical data allows his work to speak for itself. This is especially helpful when working on a topic as subjective as morality, which can invoke passionate arguments. “It helps, in a way, living between two worlds, one liberal and one conservative. They both think that everyone on the other extreme is an idiot. It’s helpful for me to know that there are reasonable, intelligent people on both sides. The way people see the world has a big impact on what they do, who they choose to relate with, and what they imagine is possible or desirable.”

He is currently directing a project that involves a nation-wide survey that was crafted by an international group of scholars in sociology, psychology, and linguistics. The survey combines different research instruments and theoretical frameworks to try to identify key differences in people’s moral views and find explanations for those differences. The ongoing findings of the research are available to all scholars in an attempt to build a sort of Rosetta Stone for researchers interested in measuring morality.