Q. How can DNA be a tool for human rights?

Human rights injustices afflict many populations in the world: migrants fleeing Central America, Cambodia or Libya; Nigerian sex slaves in Italy; sex trafficking victims in the U.S. While scientific technologies cannot resolve crimes of humanity, DNA can be one tool to address exploitation and human trafficking . DNA testing could, for instance, help identify missing persons and potentially reunite those who have been trafficked with family members. But to do so, there needs to be better technology and a shared database contributed to by multiple parties that respects the sensitive needs of vulnerable populations. Navigating the science and its implications can be daunting, and ethically troublesome, but that doesn’t mean the use of science for humanitarian purposes should be discounted. 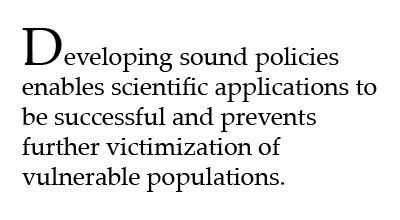 For instance, there is a prostitute diversion program in Texas that is collecting DNA swabs from sex workers for post-mortem identification. Since many of these women don’t use their real identities on the street, and there are a number of them who, sadly, will fall victim to the serial murders that happen along U.S. highway routes, having DNA swabs on hand can aid police in alerting their family and prosecuting the crime. But while this is a positive use of DNA, it comes too late for the victims themselves. And importantly, at the time of DNA swabbing, sex workers often are at the mercy of the police, may be under the influence of drugs, or may be vulnerable to coercion. Informed consent is not possible to obtain under these circumstances.

Migrant populations also can benefit from DNA, particularly in reunification of families, such as post-conflict refugees who disperse. Migrant children are at-risk of human trafficking, being placed with so-called relatives who actually force children to work, to be soldiers, or to marry underage. There is interest in utilizing DNA among different organizations and agencies working to end human trafficking. They all have the best of intentions, but they also want to manage their own resources and face challenges sharing data and strategies. These disjointed efforts should be united, to inform policy and to develop a shared database. DNA usually is obtained through law enforcement, but sex workers and immigrants in custody of authorities tend not to trust the officers or even the social workers assigned to their cases.

The privacy issues at play are a crucial consideration for ensuring that private data cannot be subpoenaed for other uses, or used for research without consent. One solution would be to use an unbiased party, outside of any governmental or corporate entity, to consent and privatize information about individuals in a shared database. With proper policies in place, we could protect not only the genetic information, but the names and addresses of at-risk persons, as well.

At times science can be a tool of human rights; the greatest challenge is not the development of the technology itself, but determining what policies need to be in place to make the scientific applications successful and to prevent further victimization of vulnerable populations.

As a child, Sara Katsanis can remember sitting at the dinner table as her older sister explained the Punnett square, a diagram used to predict genetic outcomes. Katsanis was enthralled with the idea of using mathematics to help predict and refine biological science.

She would go on to study biological sciences in college, but it was her minor in philosophy that would eventually guide her to view the application of science through an ethical lens. Armed with a Master of Science degree in Medical Genetics with Immunology from Brunel University, Katsanis spent her early career in criminal forensics, just as DNA testing was gaining public recognition in high profile cases. While her work was socially rewarding, it was emotionally difficult to work with violent cases and frustrating to know how to solve a case scientifically, but not allowed the protocol to do so.

She then landed briefly at a biotech firm before joining the DNA Diagnostic Laboratory at Johns Hopkins University. At the lab, she was able to apply her work in a personally rewarding way, to diagnose disease, particularly in prenatal cases. At that time, she began sitting in on Federal-level policy meetings as the lab representative, sparking a new interest in science policy.

Researching and thinking through genetic testing policy, first in forensics then in medical diagnostics, challenged her in new ways, leading her to collaborate with the Genetics and Public Policy Center at Johns Hopkins. She eventually joined the Center full-time as a genetics policy analyst. At the time, many in the Center were active in helping form what would become the Genetic Information Nondiscrimination Act of 2008, which prohibits genetic information discrimination in employment and health insurance. At the same time, the Combined DNA Index System (CODIS) database for criminal justice DNA profiles was expanding, and Katsanis was the only member of the Center’s team with a forensics background.

At the Center and as she transitioned to Duke in 2009, she analyzed national and state policies on direct-to-consumer genetic testing, surreptitious collection of DNA and familial searching of CODIS, and collection of DNA from arrestees. Some of the states that collect DNA from arrestees will expunge the data failing conviction, but other states may retain the data in the database. While this was upheld by a Supreme Court case in 2013, she appeals for real and informed public debate on the privacy issues at stake.

As she was preparing to continue her work in policy research at Duke, she met with the former head of the FBI’s DNA lab, who was just transitioning into academia himself. In their conversation, he identified a policy gap around use of DNA for human trafficking. DNA had a utility to help, and the forensic science and CODIS database both had developed greatly, but the policy and privacy implications had not been considered. Katsanis has been working to untangle these difficult issues while at Duke, now working with the Science and Society Initiative.

Sara Katsanis is an instructor with the Duke Initiative for Science & Society. The Good Questions series is an ongoing publication project of the Kenan Institute for Ethics that allows faculty and students to frame their work through the lens of ethics. Photography by Brian Mullins.