Incentives—offers made to motivate particular actions—seem to be an easy fix for all kinds of problems.  There are programs that offer incentives to get people to take their medicine.  Some schools give cash incentives to students who get good grades.  Incentives are used to increase worker productivity, and so on. The use of incentives is one answer to the question: how can one person get another person to do what he wants him to do?

But studies have shown that incentives often backfire.  Offering money to blood donors can decrease the number of volunteers.  Young children will draw fewer pictures with less enthusiasm if an incentive has been offered.  Workplace incentives often produce resentment, rather than increased productivity.  Why? 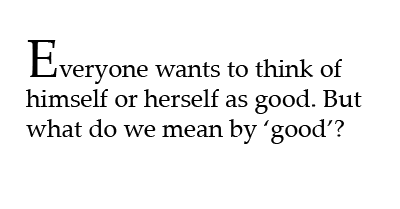 The reason they backfire is because, compared to the intrinsic motivations, extrinsic incentives feel insulting.  When employers try to micromanage through the use of incentives, employees often experience this as a sign of distrust and disrespect.  When people are offered cash or a tax break to accept a nuclear waste site in their area, many react as if they are being offered a bribe—the assumption is that they will put private benefit above any public concerns.  If a school principal offered teachers an incentive to adopt a new reading program, they might well feel insulted too.  If the reading program is really superior, why not appeal to their professional judgment by making the case for the new program on its own merits?  It is often important to people not only to do the right thing, but to do it for the right reason.

I think this sense of insult is important. Citizens of democracies ought to be touchy about their autonomy and about their capacity for judgment.  People are active, independent agents with complex motivations and a desire to be respected.  We should feel insulted if we are treated like lab rats responding to food pellets. We need to cultivate the sense of insult we feel when incentives are inappropriately offered.

Beyond being individually insulting, the widespread use of incentive systems poses an additional social and political danger.  If incentives become the preferred tool of behavior management in all domains—in schools and factories, within families, as well as in the marketplace—the assumptions about human nature upon which incentive systems are based—that people always choose what is most beneficial to themselves and can be steered by extrinsic rewards—will become self-fulfilling.  If people are continually treated as though the only important question is “What’s in this for me?” it will become the only question that they ask—and then, unfortunately, incentives will no longer backfire.

Of Good and Evil

Political scientist Ruth Grant believes we need to deepen our thinking about some of the most basic of moral concepts, such as good and evil. “None of the things that we call ‘good’ are good always or in every respect, and we know that a great deal of evil has been done in the name of the good,” she says. A desire to enrich understandings of good and evil prompted Grant to gather a group of Duke faculty to reflect and produce a collective volume on the concept of evil, and more recently on the concept of good.

Grant’s initial interest was prompted by 9/11 and the differing reactions she saw to the use of the term “evil” to categorize individuals and actions.  “I was struck by the fact that some people saw a great danger in not making the judgment that some people and actions are evil, while others hesitated to use the term because it demonized others,” she says.

Grant feels it’s important to interrogate our implicit understandings of moral concepts like good and evil, because these understandings form the basis of standards of conduct that guide action. “We are constantly judging ourselves with respect to some moral scale,” she says. “We learn more about ourselves when we reveal what lies behind that scale.”

Identifying the standards for making ethical judgments has been central to Grant’s work. For example, she has focused on how to distinguish principled behavior from fanaticism and, more recently, how to recognize unethical uses of incentives.

When Grant teaches, she employs a variety of readings to prompt student reflection on goodness and the good life.  “The search for goodness is perennially interesting,” she says, “because it responds to a permanent psychological reality.  Human beings need their own moral approval. Everyone wants to think of himself or herself as good.  But what do we mean by ‘good’?  I try to expose students to new ways of thinking about what they are already thinking about.”

For example, through a reading of Shel Silverstein’s children’s book, The Giving Tree, students consider the implicit equation of goodness with altruism.  In the story, a tree sacrifices itself for a boy’s well-being —its apples for money, its branches for a house, its trunk for a boat—until the tree is nothing but a stump.  “From this very simple but profound story, we can open up questions that investigate our unthinking equation of altruism with goodness,” Grant says.  “The dominant thinking on altruism is that it requires self-sacrifice—and thus how ‘good’ you are depends on how much you give up. But being good is not a zero-sum game. We should realize that altruism can be beneficial to the giver as well as to the receiver.”

Understanding what is behind implicit assumptions about what is good and what is evil is a reflective process for Grant as well as for her students.   “Within the context of classes I do not place myself as the exemplar,” she says, “but only a guide in the exploration.”