Q:  Who should have a right to the “commons” in a post-colonial world?

A:  Questions about who should hold a right to “the commons”—access to social, natural and political resources, or even historical memory and belonging—are fundamental problems for all social groups. There are particular problems for those that live in the ambiguous political space of the post-colony, who often are also wrestling with the effects of resource loss and insecurity due to global climate change.

The environmental losses entailed with climate-related hazards throw into sharp relief the potential future crises of the “commons.” People with past claims to shared spaces and resources become environmental refugees. Who should and could claim rights to the “commons” is likely to be an even more explosive problem than it has been in the past.

Fiji is one such place for this conflict.  Debate festers between ethnic Fijians, who are predominantly Methodist Christians and make up over half of the population, and a Fijian-Indian population originally brought to Fiji as indentured servants in the 1870s by British colonialists to work on sugar plantations, who now make up about 44% of the population and are mostly Hindu.  Fiji gained independence from the British in 1970, but since then democracy has been interrupted by military coups and civil unrest, and rights for Indo-Fijians have been continually contracted and expanded by the ethnic Fijian majority. 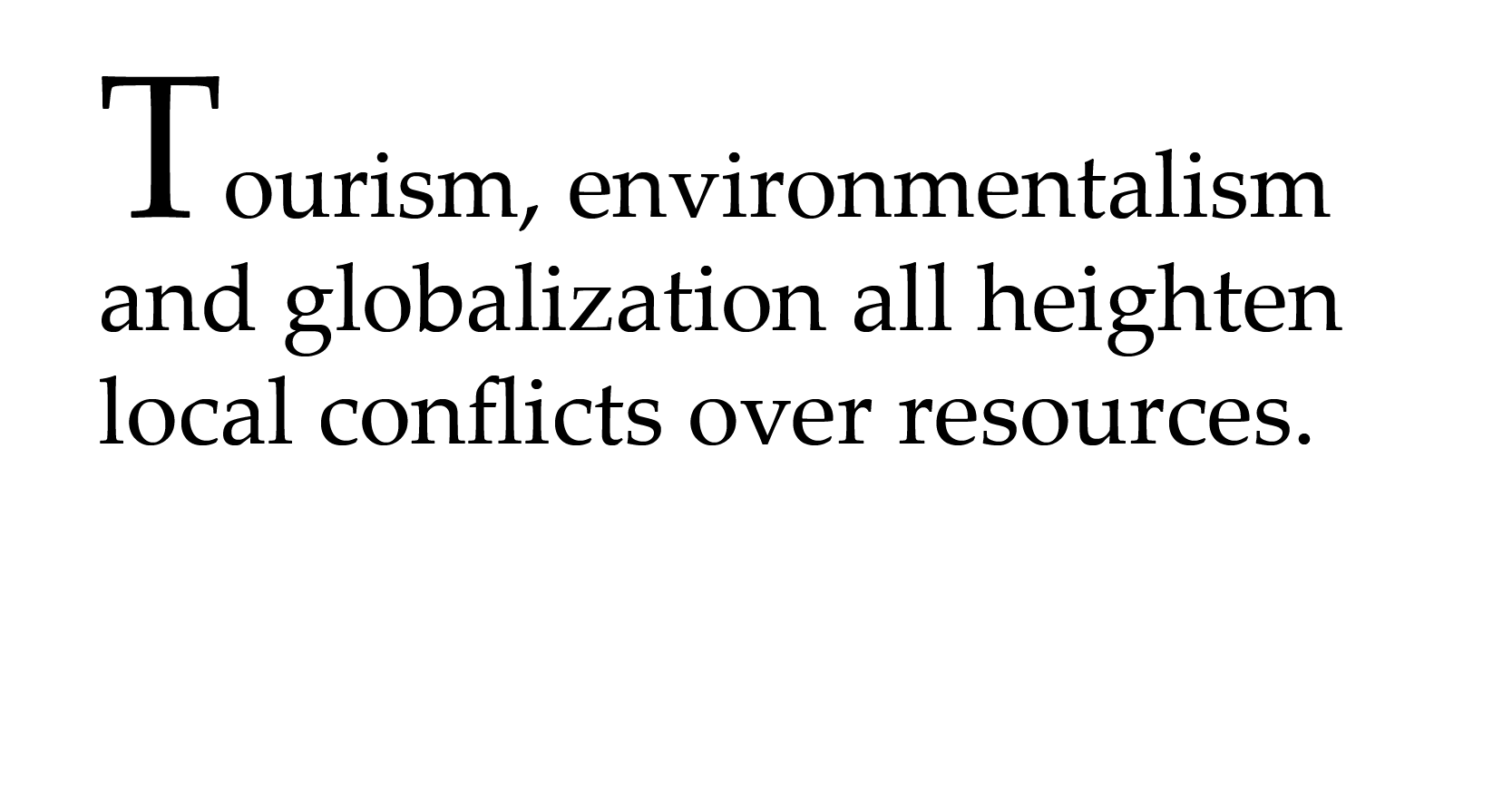 Further complicating Fiji’s quest over rights is its relationships with foreign tourists, environmentalists, and other forces of globalization. One small but telling example of this was an incident in 2007, when planners of a Methodist Church conference killed 82 critically endangered turtles to be eaten by attendees of the conference.  Environmental activists and foreign tourists were angered, leading an unknown activist group to print t-shirts reading “Save a Turtle, Eat a Methodist.”

Native Fijian groups were offended by the t-shirts on multiple levels. First, they defended their right to cull the turtles from common fishing areas ceded to the ethnic Fijians by the state.  Second, many perceived the slogan as indicating that western tourists view native Fijians as being of the same worth as turtles.  Third, the t-shirt slogan “Eat a Methodist” hints at a history of cannibalism from which Methodist Fijians would like to distance themselves.  There was swift outcry to ban the tourists and groups involved from the country.

While this story may appear to be a simple clash between modern and traditional ways of life provoked by an ecological controversy, it’s really quite telling about conflicts of “rightful place” both in Fiji and around the world. As Fijians author a narrative over time of what is a “Fijian way of life”—from the turtle incident to the military coups to stripping rights from the Indo-Fijian minority—questions are raised about the larger issues of citizenship and access to what is common, or should be held in common as a long standing right of place, in a shared and contested space.

One is hardly likely to find black and white answers to this question. In post-colonial countries around the world, competing claims by different ethnic groups for disputed resources, spaces, and homelands are often as violent as they are complex. People struggle for territory and place, heritage and language, as well as rights to environmental resources.

Michaeline Crichlow’s work as a sociologist takes her literally all over the globe.  A professor of African and African American studies and sociology studies, Crichlow’s research interests extend from Fiji to South Africa to the Caribbean.  She was born in St. Lucia, but after her mother’s death was sent to live with her grandmother in Barbados.  Her grandmother, a small sugar cane farmer living on the opposite side of the road from a large plantation, gave Crichlow her first glimpses of colonialism’s effects and wealth disparity.

“I would watch the manager on his horse supervising the workers in the fields, in hindsight a 19th century redux, but not quite,” she says. Her grandmother was described as “poor great”—a flexible concept expressed by Barbadians as someone on the lower end of the economic scale who acts with a lot of class: “a very proud and independent person, a sugar-cane farmer who was also a trained pianist. I believe there are only a few of those in the world.” Her grandmother organized sporting events on her property for poorer children in the community, where she would mix soda with coconut water to stretch it out and the children would make their own prizes for all the events.

Crichlow was drawn to journalism and after high school served as the editor of a left-leaning newspaper in St. Lucia, where she returned to after her father remarried. However, she found that journalism didn’t answer her questions. When she went away to the University of the West Indies, Mona campus (Jamaica), she discovered that her interests led her to sociology, where she met professors who encouraged her pursuits.

Her current work examines issues of rights, territory, and ethnicity in Fiji, the Dominican Republic, and South Africa. In the Dominican Republic, citizenship is restricted for ethnic Haitians, who share the same spaces but are looked down on for their darker skin and supposedly different cultural practices. South Africans struggle over claims to territory and fuller citizenship in a post-apartheid period, where wounds are still open and grievances of various sorts abound.

She credits her Barbadian grandmother as the single most important influence in her life. “She was extraordinarily empowering,” Michaeline stated. “She imparted a pride and independence that have shaped my life. Also, I learned very early about the importance of land ownership and land use. I witnessed without fully understanding it at the time, as I was a very young child, the migratory and exploitative, yet creolizing, histories involved in sugar cane production on the island of Barbados. It is these concerns that have been threaded throughout my professional life in myriad ways.”

Michaeline Crichlow is professor of sociology and of African and African American studies at Duke University. The Good Questions series is an ongoing publication project of the Kenan Institute for Ethics that allows faculty and students to frame their work through the lens of ethics.