Q: How do we build a common life in places characterized by deep religious and cultural diversity?

Building a common life between different faith groups and people of no faith without demanding everyone abandons what they cherish about their way of life is a challenging prospect. This challenge is particularly acute in urban contexts where state and market pressures are most intense. Another dimension of the problem is that different religions offer competing truth claims and forms of life that as a result of globalization and migration are increasingly jostled together.

There are three dangers to avoid in creating a genuinely plural and multi-faith public sphere. The first is co-option: for religious communities to be constructed by the modern state as just another interest group seeking a share of public money, or be instrumentalized in order to foster social cohesion and make up the deficiencies of the welfare state. The second is communalism: this entails religious communities framing who they are within the discourses of either multiculturalism, as just another cultural group in need of recognition, or within the discourse of rights, in which congregations are dissolved into a collective of individual rights bearers. The third is commodification: the re-construction of beliefs and practices as services to be consumed or commodities to be bought and sold in the religious market place. 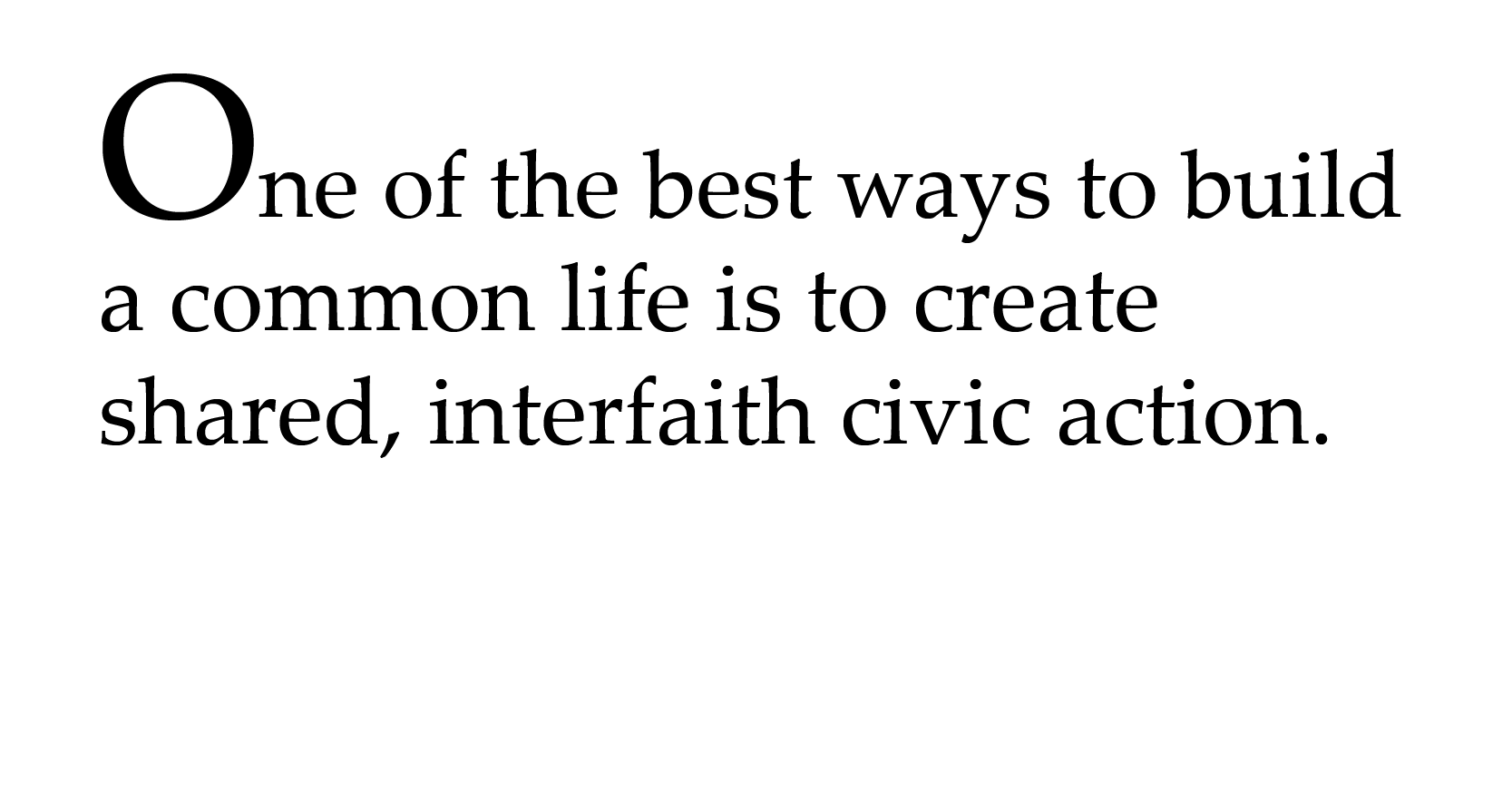 The solution comes through forging meaningful inter-faith relations. A prominent proposal is that religious coexistence is achieved through dialogue and cohesion—unity through emphasizing uniformity. Yet in order to have a real conversation, there needs to be respect for differences.  Meaningful encounter entails crossing borders, not denying them; it means allowing for conflicts and conciliation. One of the best ways to forge these relationships and build a common life is to create opportunities for shared, inter-faith civic action that moves beyond humanitarian service provision and dialogue to joint political action. Religious groups collaborating together can be helpful mediators and advocates for individuals when negotiating for better governance and the just and generous distribution of resources. Recent examples of this kind of joint civic action in the US include broad-based community organizing, the “circle of protection” to safeguard public spending for the most needy, and the sanctuary, fair trade and immigration reform movements. In the UK the work of London Citizens exemplifies the vision of inter-faith relations as a civic practice. Its membership is made up of churches, mosques, synagogues, schools and unions who collaborate together to campaign on issues ranging from a living wage to safer streets.

One of the biggest barriers to this kind of joint civic action is a certain disdain and suspicion of religious involvement in public life by cultural, political and economic elites. Part of this stems from European and American notions of modernization, that as the world became increasingly modernized it would also become less religious. We realize now that things are a bit more complicated; belief and unbelief interact and constitute each other and they do so in different ways in different contexts. The reluctance to intermingle policy and religion follows the thinking that in not directly addressing any faith or religious tradition, a sort of equality can be achieved by keeping religion out of the public sphere. However, the paradox is that by religious groups getting together to contest the policies of corporations or governments through a shared commitment to the priority of social over political or economic life, they both build up a common life and enable a genuine plurality in the public sphere. Rather than being antagonistic, such action can contribute to democracy as a form of collective problem-solving and the need for collaborative governance that involves multiple stakeholders and sources of wisdom in addressing complex issues. Examples of this kind of initiative include the involvement of diverse religious groups in tackling issues as wide-ranging as restorative justice and urban housing.

Divinity professor Luke Bretherton brings a unique perspective to religion in American public life. A Londoner born and raised, he spent many years working with faith-based organizations and grassroots democratic groups in Europe during a period when public authorities simultaneously sought to collaborate more with religious groups for purposes of welfare delivery and saw religious groups as a security threat in the wake of 9/11. He has also advised the UK government on strengthening civil society and was involved in initiating the “Blue Labour” debate in the Labour Party.  His most recent book Christianity and Contemporary Politics won the 2013 Michael Ramsey Prize for Theological Writing.

Bretherton is committed to enhancing and telling the stories of the inter-relationship between a democratic politics of the common good and religious beliefs and practices. During the 2010 General Election, he was active with London Citizens, which organized a “listening campaign,” in which the concerns of thousands of Londoners were recorded and organized into a Citizens Agenda. A primary issue addressed was that of debt, usury and the need to introduce a cap on interest rates.  The group organized an assembly with all of the candidates for prime minister to address this agenda.  Drawn from the institutions in membership, thousands participated in the assembly.  The media billed it as the “fourth debate,” but it was the only one not held in a TV studio and organized by ordinary citizens rather than managed by party officials.

Bretherton came to Duke last July from King’s College London. His work there on the Faith and Public Policy Forum, a non-partisan endeavor aimed at bridging scholarship and public debate on issues relating to religion, citizenship, and politics, allowed him to jump immediately into a leadership role in Duke’s new Religions and Public Life initiative, a joint project of the Kenan Institute for Ethics, Duke Divinity School, and Trinity College of Arts & Sciences. In the spring, the initiative brought an international group of scholars and practitioners to campus to engage the university and local community on issues at the intersection of faith and politics, such as global health, poverty, and development. Looking forward, there are new projects beginning that explore the relationship between religions and the environment and religions and international development work.  As befits Kenan’s commitment to being a “think and do tank,” these initiatives combine public scholarship with constructive engagement with key stakeholders.

Luke Bretherton is a professor at Duke Divinity School. The Good Questions series is an ongoing publication project of the Kenan Institute for Ethics that allows faculty and students to frame their work through the lens of ethics.