Q: How do people decide what is the right thing to do in any given situation?

To answer this question, one could turn to the Hindu concept of “dharma” whose root meaning is to uphold and to sustain.  Dharma indicates actions and thoughts that are conducive to the stability of all that is good in self and society. So knowing one’s dharma means knowing what right conduct should be, whether in small acts or major decisions and at any given moment or place. This process of “knowing” is usually one of experimentation and reflection, marked by things like missteps, doubt, correction, and a sense of fulfillment.

It is a misperception to think that rules laid down in ancient books on dharma or in other texts are somehow absolute moral codes that adjudicate behavior. On the contrary, those rules are contextual and subject to histories of place and person, histories that may not be knowable to us today. But what they do evoke collectively, in my reading at least, is the importance of deliberating on the profound questions of who one is, could be, should be, and how one needs to frame and answer these questions with a mindful awareness of one’s ties to different communities and social groups. And whether or not individuals use the term dharma, these questions are among the most important and tantalizing in people’s lives. 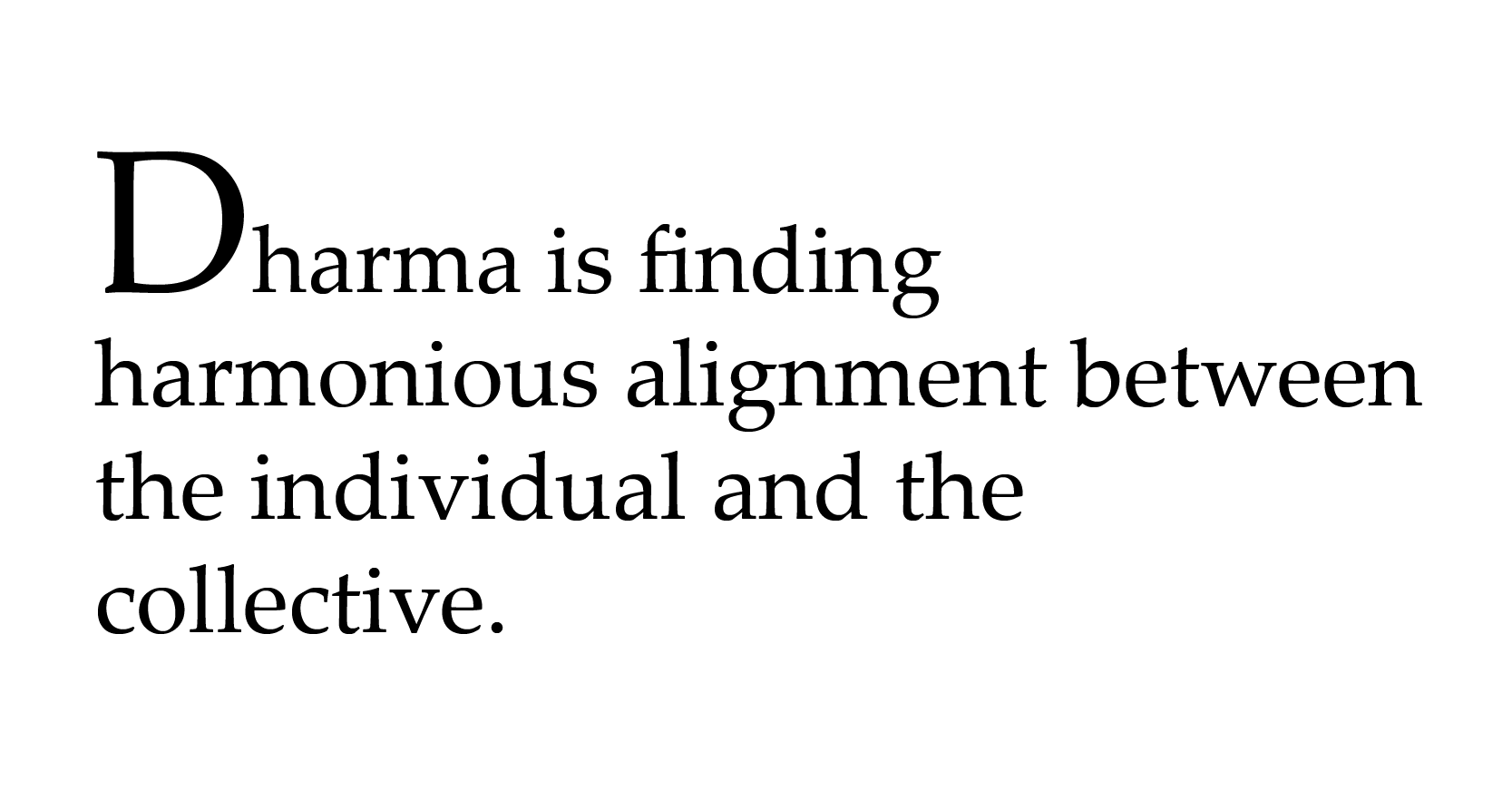 So it’s fascinating to see how people go about figuring out those questions, or variants of them. We know that people as they move through their lives rarely rely solely on rulebooks and ancient codes. In everyday life, the world of material, visual, and oral practices provides “texts” that function as vibrant forms of moral guidance. Family routines, foodways, practices of work and play, performance traditions, and oral stories, for example, are all sources and sites of ethical reflection. A parent who accepts and forgives a child’s deception can shape a child’s moral development more deeply than a scripture that urges one to not deceive.

There is a moral literacy that comes from observing practice. Those who spent time in Gandhi’s ashrams, for example, have recalled how the sweeping of public grounds was considered as relevant to building an independent nation as political protest. Both were practices of self-reliance, both necessary, and Gandhi did not exempt himself from anything he expected others to do or be.

I’ve been very interested in understanding how conversationally-shared stories in particular engage the ethical process.  Stories told in homes and offices, on practice fields and in locker rooms, and in multiple gathering places are texts that are spontaneous, changeable, and derived from multiple sources. In many ways, they represent the individual agency, the improvisational quality, the ambiguity, and the struggle that characterize everyday life.

Let’s take a story a friend may tell about upcoming holiday travel. She talks about her desire to spend the holiday in her own home and to avoid the cost and inconvenience of travel. Yet, she says, she has to balance this against the responsibility she feels toward her extended family and toward broader social expectations. She finds it is an uneasy balance, and in vocalizing this story, she engages herself and her listeners in a process of ethical reflection about the right thing to do (dharma).

Reflection plays a powerful part in how individuals mingle memory and experience to live a moral life. Remembering a moment when we felt excluded and marginalized can become the template for how we can strive to cultivate practices of inclusiveness. Ultimately at the heart of the idea of dharma is finding harmonious alignment between the individual and the collective. It is through careful listening and engagement with the texts of everyday life that we have the best hope of choosing courses of action that achieve that ideal.

“Ethical doubt—the feeling of uncertainty about a moral position—is not always a bad thing,” says Leela Prasad.  “Doubt does not necessarily preclude moral action,” she says, “but in fact could enable reflection and an awareness of alternative possibilities.”  Doubt provokes us to examine “why we do what we do.”  Through the course of her research in India, Prasad has engaged ethnographic methods—interviews and observations of behavior and conversations—to understand and explain how moral life and moral doubt are experienced and how notions of “appropriate” behavior emerge in everyday life.

One current project is Prasad’s investigation of a popular live Indian call-in television program, “Dharma Sandehalu,” translated as “Doubts about Ethical Conduct.”  The show connects callers to Hindu scholars who draw on their knowledge and interpretation of Hindu traditions and texts to answer callers’ questions about right conduct in the context of daily living. (Prasad is also interested in exploring how technology and broadcast media create new ways of understanding and narrating human experience.)

Dharma is about an individual’s duty to do the right thing. But it is also grounded in the idea of a dharmic order which is in constant play, says Prasad. “That order is all-inclusive—for example, how trees are planted or cut; how aesthetic arrangements are made in homes, yards, and temples; how ritual worship is performed; how businesses are run,” she says. “Dharma Sandehalu” callers ask questions ranging from, “Is it OK for a younger person to point out moral faults in an older person?” to “Is it appropriate to travel during the harvest festival Sankranti?” and “What type of oil should be used in the lamps in home shrines?”

“As in any other society, ethical practice in the Hindu context is dynamically constituted,” says Prasad. “It draws and weaves together various sources of the normative, of right action—a sacred book, an exemplar, a tradition, a principle, and so on.” The notion of “the right thing to do” comes from reflection on multiple sources, multiple customs, and multiple traditions. “And in the context of the television format and the uniquely call-in feature of the program, ethical thinking is also vibrantly visual and performative,” she says.

Through her interviews with the program’s callers, Prasad found that the “Dharma Sandehalu” scholars’ responses are not necessarily followed completely. Individuals did not always consider the information as an ultimate authority, but as a source of guidance among many other sources. Moreover, many callers expressed an aesthetic pleasure in observing and participating in ethical debate.

“Now I’m exploring the relationship between the kind of ethical uncertainty an individual experiences and the extent to which he or she follows expert advice,” Prasad says.  “How does the nature of the doubt, and the context in which it occurs, affect moral action?  It’s fascinating to me how this continuous process of doubt, reflection, and tentative moral understanding occurs and the constructive role that doubt plays in taking us toward, rather than away from, right action.”

Leela Prasad is Associate Professor of Ethics & South Asian Studies in the Department of Religion at Duke University. She is also Faculty Director for Duke Center for Civic Engagement. The Good Questions series is an ongoing publication project of the Kenan Institute for Ethics that allows faculty and students to frame their work through the lens of ethics.