Q: What’s in a stereotype?

We all stereotype. We have to use categories, labels, generalizations, and not very nuanced judgments and conclusions every day to make sense of a world of chaotic and cacophonous sounds, images, people, ideas, and information. A stereotype is like a short-hand label that enables us to distinguish between the millions of bits of information we deal with everyday. 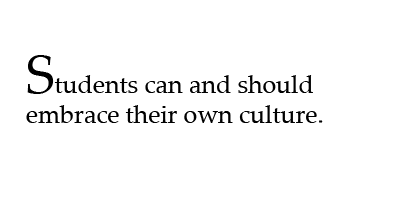 One of the most ubiquitous forms of stereotyping is branding. Unfortunately, the ways we distinguish between brands of soda, cars, or shoes are similar to the ways many people distinguish between Asians and Latinos, blacks and whites. Yet humans are not products or institutions. We are as varied as individual fingerprints. For a variety of complex social, political, cultural, and economic reasons, however, people throughout time and around the world have used arbitrary and often meaningless distinctions to categorize, label, and generalize about those who are different.

These distinctions based on race, gender, sexuality, and class are historically contingent and are often viewed in natural terms. The circulation of negative stereotypes—for example, straight men are less emotional than gay men—does the work of hardening these distinctions. There is harm in negative stereotypes because people who are constantly subjected to these constructions often internalize them or spend their lives fighting against them.

Not all stereotypes are negative, however. For example, consider the so-called model minority stereotype—smart, hard-working, and professionally successful—that is associated with South and East Asians in the United States. Not all Asians fit the stereotype, but many feel pressure to conform to it, which may explain the disproportionate cases of academic dishonesty among Asian students. Thus, even positive stereotypes can be harmful.

Because we categorize, label, and generalize to make sense of a chaotic world, we have to work at not stereotyping, labeling, and generalizing about social groups. And we should do this while respecting others cultures, group identities, and patterns of behavior.

As both a professor of cultural anthropology and Dean of Academic Affairs for Trinity College of Arts and Sciences, Lee Baker has an understanding of what it means to navigate sometimes competing identities. “In a single morning I go from teaching or writing about the myth of biological determinism in American culture, to debating how to make Trinity College the best liberal arts college in the country, to questioning how to make 7,000 box lunches for graduation less expensive. Smaller cookie? No pickle?”

Handling multiple roles with good humor and dexterity and having a deep understanding of what it means to navigate among various identities is a part of Baker’s everyday professional life and one that he was, quite literally, born into.

“As a black kid who was raised by ethnic Swedes, I always had a clear and distinct sense of how people are treated based on race,” he says. One of only two black men in his high school, Baker says he worked hard at “being black.” “I tried really hard to emulate and imitate my heroes in the 1980s—track star Edwin Moses, Rep. Ron Dellums, even pop sensation Prince! But my own cultural competence was always called into question. Not because I was raised by a white family, but because I couldn’t dance or play basketball.”

“Identities have moral importance,” he notes, “because they influence the freedom of individuals to act.” For that reason, Baker says it is imperative that we understand how identities arise and the effect they have on individuals and societies. “We live through our identities, but we can also be trapped by them.”

As an anthropology professor, Baker finds that one of the biggest challenges in talking and teaching about the concept of identity is that most people have an intuitive belief in essentialism.

“This is the idea that people and things have some invisible essence that makes them what they are, and that these essences are retained across time and space,” he says. “‘I’m black, I’m straight, and so this is the way that I should behave and the way I should feel.’ But identity is plastic; it depends on place and time, on social and historical context.”

In his role as academic dean, Baker wants to empower students to command their own identities.

He wonders why the white fraternity culture on many college campuses continues to be the dominant aspirational one, even as colleges diversify and those who actually fit that model are not the majority.

“Students can and should inhabit their own culture,” he says. “We as college administrators should strive to offer attractive alternatives and to support positive and healthy identity formation for students while making sure that the diverse identities of those who come to our schools are not lost through assimilation.”

Lee Baker is the Dean of Academic Affairs at Trinity College of Arts and Sciences and a Professor of Cultural Anthropology and African American Studies. The Good Questions series is an ongoing publication project of the Kenan Institute for Ethics that allows faculty and students to frame their work through the lens of ethics.