Q. How can we design legal institutions to resolve international problems?

Many of today’s most pressing challenges transcend national borders. Combatting climate change, respecting human rights, ensuring financial stability—these are only a few of the many issues affected by the flow of people, money, and ideas across borders.  Addressing these challenges requires international cooperation. But there is no way to force nation states to help solve these problems, for example by signing a treaty or becoming a member of an international organization. The key is to design international agreements and institutions in ways that give states incentives to join and cooperate.

Creating those incentives is easier said than done, however. Global legal institutions have diverse members. They include old and new nations, rich and poor states, and governments ranging from democracies to dictatorships. These countries often have shared goals, such as stamping out terrorist networks or creating rules to protect civilians during armed conflict. But at other times competing interests impede the creation of international rules to resolve transborder problems.

Overcoming these hurdles is sometimes easier at the regional level. Europe in particular has very strong international legal institutions—including two courts. Because these courts are widely viewed as effective, other regions have emulated them. There are now more than a dozen European-style international courts operating in Africa, the Americas, and parts of Asia. You might expect these institutions to function just as they do in Europe. But a growing body of research shows that isn’t so. Instead, local actors and judges are redesigning and adapting international institutions to make them relevant to each region’s distinctive needs. 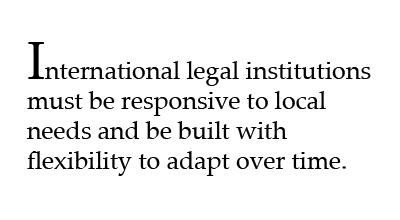 In South America, for example, the Andean Tribunal of Justice has been active and influential in the area of intellectual property—a subject of interest to the businesses, administrative agencies, and law firms that work with trademarks and patents. Just like its counterpart in the EU, the Andean Tribunal can hear many other types of cases, including suits about trade rules, taxes, and the environment. But there is little demand for international litigation in those other areas. Intellectual property thus remains an island of effective international adjudication surrounded by a sea of under-enforced legal rules in other areas.

Other international legal institutions have adapted by expanding their mandates. In West, East and Southern Africa, for example, three international courts were created to improve compliance with free trade and economic development rules. With most governments and businesses in the sub-regions preferring to resolve disputes via negotiation or diplomacy, the three courts risked becoming irrelevant. To avoid that fate, the judges accepted suits by individuals and NGOs challenging government human rights violations—a decision that led to a sharp uptick in the courts’ caseload and public profile. This was a bold move, one that required judges to creatively interpret international law and risk the displeasure of political leaders.

These examples show that it is important not only to create international legal institutions that respond to regional or local needs, but also to build in flexibility to allow the institutions to adapt over time if the reality they face differs from what their founders imagined.

Intellectual puzzles and problem solving attracted Laurence Helfer to the legal profession, but it was the addition of a social science perspective that shaped his career in international law and politics. As an undergraduate at Yale, Helfer majored in Russian and European studies with a focus on urban planning. While attending law school at New York University, he also studied for an MPA at Princeton University’s Woodrow Wilson School of Public and International Affairs.

“I learned that law, political science, and economics study many similar problems, but analyze them from different perspectives using different tools. This interdisciplinary perspective has been very useful in my work. It gives me a clear-eyed view of what international law and institutions can realistically accomplish. It’s also led me to examine empirically the relationship between law and politics and to identify factors that can either enhance or inhibit cooperation among states.”

While he was offered a scholarship from Princeton to study for a PhD, Helfer decided instead to practice law. After a year as a judicial clerk for a federal appeals court judge, Helfer was hired by a small New York firm that specializes in international law, civil liberties, and intellectual property. The firm’s distinctive practice areas, which also included work for several foreign governments, shaped Helfer’s scholarship, which includes human rights and international intellectual property law and policy as well as international law and institutions.

“My years in practice helped me to understand the practical aspects of the law as well as its conceptual foundations. This has made me a much better teacher. I use the skills I learned in practice to frame problems and arguments in a clear and focused way.” Helfer also takes pride in mentoring students and junior faculty, both at Duke and in his new role as a permanent visiting professor at iCourts: The Center of Excellence for the Study of International Courts at the University of Copenhagen. “One of the most rewarding parts of my job is working with young lawyers and scholars to figure out the next steps on their professional paths.”

In addition to his affiliation with the iCourts center in Denmark, Helfer’s research has taken him across the globe to study other international institutions and legal rules in action. He has examined sub-regional courts in the Andean Community and in Africa, dispute settlement in Southeast Asia, and the human rights practices of Caribbean governments relating to capital punishment. His scholarship, which draws on his interdisciplinary skillset and is sometimes coauthored with political scientists, focuses not only on the formal output of legal institutions—court decisions or UN resolutions, for example—but also on how judges, government officials, NGOs, and lawyers develop relationships that can strengthen or undermine the rule of law.

“Analyzing these relationships can’t be done in a library; it requires meetings and interviews with key stakeholders who create and adapt international legal institutions to their political and social contexts.”