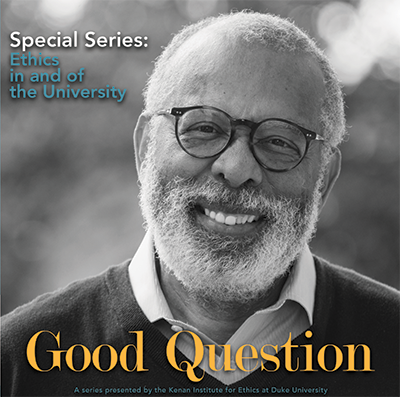 Q. What is the role of athletics in higher education?

In many ways, it seems that we are living in the era of college sports scandals. A constant news cycle combined with ever-increasing pressures on athletes in certain sports has brought into question what part, if any, athletics should play in our colleges and universities. It’s true that these pressures present the temptation to cheat, sometimes in ways that hurt academics. But what is often overlooked is the way in which athletics can instill values and ethics to create better students and better prepare them for life beyond the university.

College football and basketball have become national pastimes that are integral to American entertainment. With that comes a lot of money involved.  It only takes one person to cause ruin for an entire program, for the cracks to show. It is also possible for schools to do both athletics and academics well. What is crucial is to build a culture that values not just the success of winning but playing by the rules. For competitive institutions like Duke, the goals for athletics and academics are the same: to meet a standard of excellence while maintaining integrity. You need coaches talking publicly about values outside of athletics and what their student athletics are being held accountable for, while also providing the unique mentor role that coaches play in their students’ lives.

Athletic departments provide their institutions with a structure that provides a lot of assistance and support for students to transition to adulthood. While professors certainly are mentors and have the ability to affect students, you don’t often hear them talking about values in the same way. Athletics at its best embodies hard work, loyalty, competition under the rules, and the importance of relationships.

Perhaps the most crucial value that athletics can bring to the table is teaching students how to deal with defeat. On the academic side, students are more often pushed toward continuous excellence, while student-athletes must learn how to pick back up again after a loss or embarrassment. These experiences are inevitable, and the athletes are provided a way to work through them.  There will always be another game, the next match, and the next practice. In certain ways, academic pressures toward perfection provide more temptation to cheat or skirt around the rules than athletics does.

Not only does a coach have an incentive to keep athletes motivated after they perform poorly, but you learn more about a person’s character in losses than you do in a person’s wins. Learning to recover is what life is really about. Colleges and universities are built to be places that nurture students; for most, they will never again find themselves in such a supportive environment. If we don’t teach them how to work through difficult situations in an environment built for them, how will they manage in the real world?

Academic institutions in higher education should look to their athletic departments for examples of how to help students deal with adversity, both in and out of the classroom.”

Growing up in Charlotte, N.C., James Coleman was athletic but not an athlete – at least not on a competitive sports team. He frequently joined neighborhood pickup basketball or touch football games, but it was not until his time at Phillips Exeter Academy after high school that athletics and academics began to converge. With no prior experience, he joined their track team as a high jumper. While never a record-breaking athlete, he had an accomplished intercollegiate career at Harvard, where his personal record was 6’ 9” and he was first-team All-Ivy League his junior year.

The sense of teamwork and goal setting outside of schoolwork was an important foundation, and helped lead to another unexpected focus on sports in his professional career. While working at Wilmer, Cutler & Pickering, Coleman met his now wife, Duke Law professor Doriane Lambelet Coleman. Lambelet Coleman had been a highly competitive track star, and she recruited him to join her in developing the first out of competition drug testing program for what was then the national governing body for U.S. track and field. As a lawyer for the program, Coleman prosecuted athletes who tested positive for illegal performance enhancers. Together, the two also represented athletes they felt were wrongly accused of doping, including Olympic medalist Mary Decker Slaney, who tested positive for testosterone at the age of 37 under an indirect test they challenged as scientifically flawed.

At Duke, Coleman is Director of the Center for Criminal Justice and Professional Responsibility, and Co-Director of the Wrongful Convictions Clinic, but he has also been called to chair the Lacrosse ad hoc Review Committee (2006), and is the current chair of Duke’s Athletic Council (2010-present).  The work of the council in part emphasizes the importance of a student-athlete’s education, and one of its roles is to encourage students who leave early to turn professional to finish a four-year degree, at Duke or elsewhere. While Duke’s academic standards can be seen as a hindrance to recruiting and admittance of star high school athletes, Coleman insists the value of a Duke education is a tremendous benefit.

Over the years, Coleman has also seen the crucial role that athletics has played in racial integration. He himself graduated from a segregated public high school, but both experienced and witnessed a gradual receding of boundaries, including in higher education.

“America loves great athletes. College basketball and football are national pastimes, vital components of American entertainment. Athletics provided a means for black and other racial minority students to transcend traditional racial barriers and become beloved athletes. It also provided a platform that some athletes used to fight for social change.”

While his career has taken many turns, including representing Ted Bundy, it is his work with athletics that has been a unifying thread over time, “I never would have thought that athletics would become such a rewarding and important part of the work of my career.”

James E. Coleman, Jr. is the John S. Bradway Professor of the Practice of Law at Duke University. The Good Questions series is an ongoing publication project of the Kenan Institute for Ethics that allows faculty and students to frame their work through the lens of ethics. Photography by Betsy Ferney.