How can we provide solutions for patients battling obesity that don’t ask them to reject who they are fundamentally?

Obesity is recognized as one of the largest preventable risk factors for many other diseases and health problems. It has been declared a national epidemic. Behavioral solutions are needed to provide patients with the skills and support necessary to make healthful behavior change. This includes taking into account psychological and social factors like income, education, culture, and race—factors outside of the patient’s control. Rates of obesity are much higher in medically vulnerable populations. The clinical solution to obesity has traditionally required individuals to keep meticulous records of everything they eat and drink, as well as their exercise over 6-12 months. For those who are struggling to make ends meet, raise children on their own, or have limited transportation options, how do we find practical solutions for them? Technology can help.

By enabling technological solutions for obesity patients, you can deliver a personalized treatment as well as help them to visualize their progress and keep their entire health team informed. Many people think that digital health solutions aren’t viable for the poor, but the mobile revolution is quickly closing the digital divide. And the technology itself doesn’t have to be complicated. Even a basic cell phone can aid tremendously. 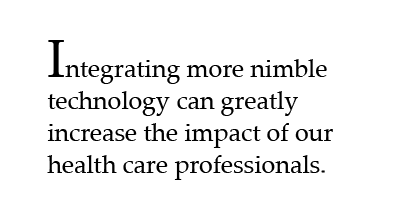 “In Boston, we developed a study for patients who were obese with hypertension. Nearly everyone was impoverished — it would be hard to overstate the complexity of their daily lives. Dealing with obesity  just wasn’t a priority. We knew that it would be very difficult for them to carry around a notebook all day to track and record the data. Collecting clinical information can be a major intrusion into people’s lives, and literacy challenges add more complexity. We developed a system to ‘smarten’ people’s regular telephones. This automated system called them regularly, asked them how things were going, parsed their responses, and gave them personalized feedback. We recorded hundreds of hours of audio that we pieced together seamlessly on the call, so that they’d feel like they were talking to a real person, not a computer.”

That study found that people were much more likely to provide information using technology than with traditional paper studies. In the grand scheme of things, researchers are trying to come up with solutions that can benefit study participants as well as the greater public. But in the day-to-day, the participants are asked to adjust their lives for the researchers’ benefit. Health researchers need to be able to meet patients where they are. To do that, they must recognize what barriers the participants face, and then figure out how to make it as positive an experience as possible.

Frequently when we hear about personalized or precision medicine, we think about costly treatments for mostly advantaged patients in top tier medical centers. But we can use technology to deliver personalized treatments at low costs for patients in the most resource-constrained care settings, patients for whom few real solutions exist.

When Gary Bennett was growing up, his parents spent what, for them, was an enormous amount of money on a personal computer. “As a child, I was on the computer as often as possible. I toyed with writing simple software programs and frequently disassembled it, even though I had no idea what I was doing.” His parents later added a modem, and with that connection, he began to engage with academics from around the country through early internet bulletin boards. While he would continue using his computer knowledge as a side business through college, it would be a long time before his love of technology would begin to shape his research.

As an undergraduate at Morehouse College, Bennett initially imagined he’d major in English, business, or history. His mother was a school teacher and his father was a school administrator in poorly resourced districts. Through them, he gained a passion for addressing income inequality as well as the need for pragmatic solutions.

It was a psychology lecture that led him on the path toward behavioral psychology and health. During the class, his professor discussed the American fable of John Henry, a black man who worked to overcome the steam engine, only to die in the process. The professor then explained that John Henryism was coined to describe the mentality that if you just keep working harder, you will succeed, when in reality many put in the work without the buffers needed to shield their bodies from stress factors such as unequal wages and opportunities, no relaxation, or no social supports. Bennett was initially dismissive of the idea, not understanding how health and hypertension could be influenced by a psychological trait. His professor asked him to join her research lab. In the course of his work, not only was he won over, but he found his calling.

After graduating, Bennett studied at Duke, where he received his Ph.D in Clinical Health Psychology. He was attracted to Duke’s long tradition of behavioral medicine, a field greatly pioneered by Duke researchers. Toward the end of his studies, the patients he saw were looking to receive organ transplants, but were having difficulty meeting the weight requirements. Many of them were from poor, rural areas, and had to travel pretty far for treatment. He began to wonder what solutions there might be that didn’t require the patients to come all the way to him.

His interest in learning more about population-based or public health approaches then took him to Harvard’s School of Public Health, first for a post-doc and eventually on faculty, splitting his time with the Dana-Farber Cancer Institute. At Harvard, Bennett developed a passion for social epidemiology, studying the broad social forces that shape health and influence health inequities. He wanted to find solutions to these challenges, and found a group of interested collaborators to develop that first study using technology to help patients monitor their behaviors.

In 2009, Bennett returned to Duke, this time as a member of its faculty. Among his new peer group was Professor Sherman James, the very researcher that first coined John Henryism.

Gary Bennett is the Bishop-MacDermott Family Professor of Psychology & Neuroscience, Director of Undergraduate Studies at the Duke Global Health Institute, and Director of the Duke Global Digital Health Science Center. The Good Questions series is an ongoing publication project of the Kenan Institute for Ethics that allows faculty and students to frame their work through the lens of ethics. Photography by Brian Mullins.