Q: After a regional conflict, the management of natural resources is often in disarray. How can conflict-torn communities best recover?

Environmental recovery includes such issues as reestablishing the water supply and its distribution.  In the aftermath of a conflict, obtaining clean, plentiful water is a daily struggle for those left behind. Urban water supply and sanitation systems are often ill-equipped to accommodate a mass influx of refugees. And the risks of dying from exposure to infectious disease linger for years owing to the lack of access to clean water and proper sanitation.

In war-ravaged countries, ranging from Sudan to Liberia to Afghanistan, however, the reestablishment of the water supply and its management has been vital for post-conflict peace-building and economic recovery.

Yet it turns out that with few exceptions (most notably, the Jordan-Israel Peace Treaty), water resources are rarely incorporated into peace agreements. Instead, the task of making sure that fresh water is not only available but can also be widely distributed is most often left to humanitarian organizations and international financial institutions.  Peace-building activities tend to follow a now-traditional post-war script of reducing arms, disbanding the military, and eventually holding elections. As a result, political concerns have taken precedence over basic environmental and natural resource management. 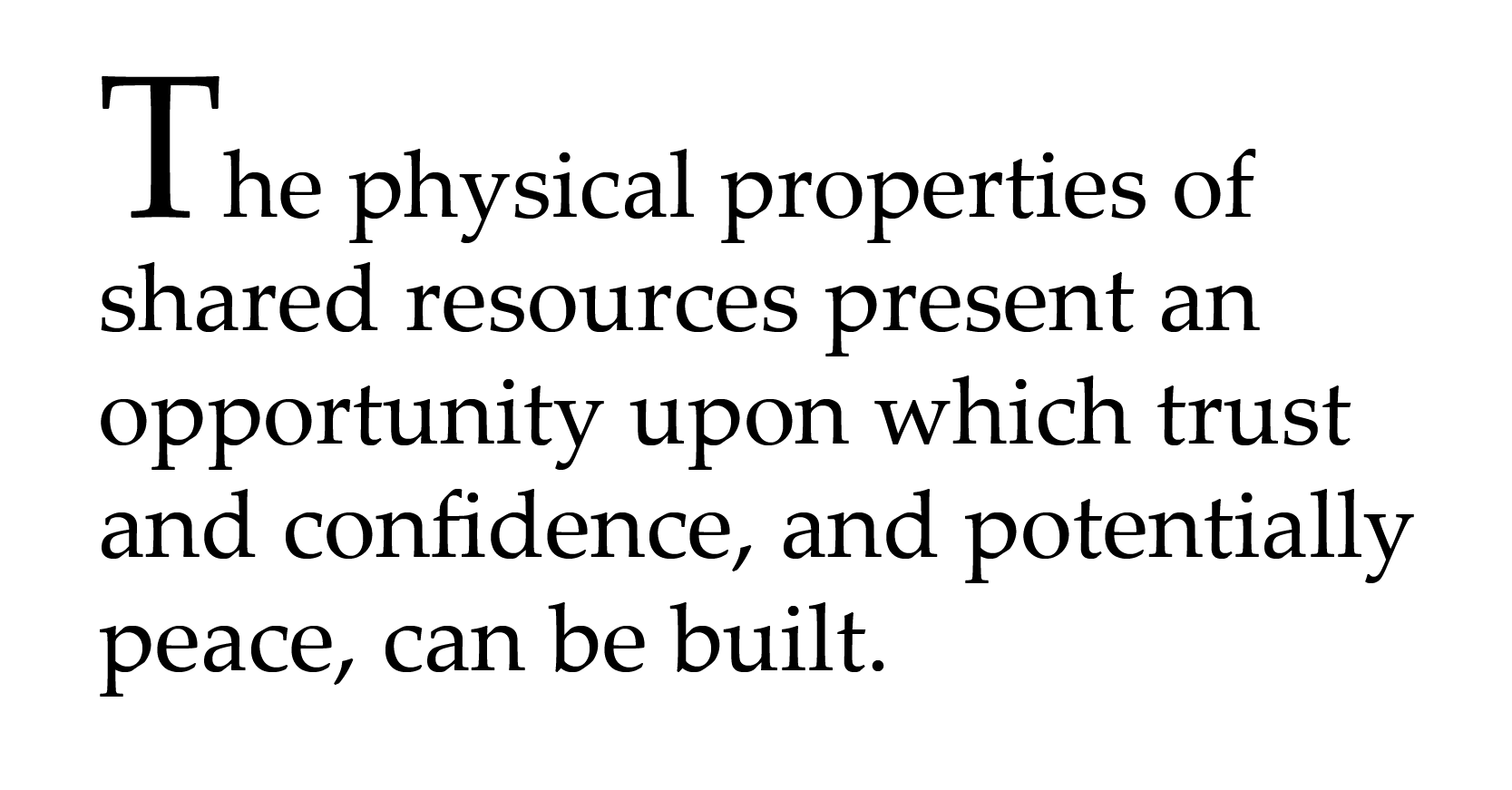 The challenge then is in determining how to insert environmental recovery into the post-war peace-building mission. For war-torn communities, the management of the water supply and its distribution cannot wait for political or economic stability because that stability is dependent upon this vital resource.

But the reality of improving water supply and infrastructure in post-conflict settings is extremely complicated; even the best intended humanitarian efforts may end up undermining economic recovery in the absence of coordination with the local population.

For example, consider Afghanistan in the years after the Soviet-Afghanistan war. During the war Soviet troops destroyed much of Afghanistan’s traditional, community-based irrigation systems (the karez) as a means to decimate the economy. By the 2000s, the management of the water supply was in disarray, water experts had fled or been killed, and data regarding the quality of water resources was missing.  Humanitarian efforts to provide an emergency water supply through deep well drilling undercut the karez system further, making the situation even worse.

Thus, for water management to effectively play a role in the rebuilding of states at war’s end, political efforts must be matched by efforts both to fully understand prior ways that water has been distributed and to incorporate the public in decisions regarding natural resources.

In the end, environmental recovery is a significant part of any post-war peace-building effort.  Issues such as water management can serve as a platform for cooperation and the consolidation of peace by helping to build confidence and restore trust among previously warring parties.

A Desire to Know

Erika Weinthal remembers the moment when she first appreciated the Socratic notion that “the only true wisdom is in knowing you know nothing”:  “I was fascinated by the Cold War and all things Russian when I was in high school, and I thought I was pretty knowledgeable,” she says. “We were studying great literature—Emerson, Shakespeare, Cooper—and I made the comment that there was probably nothing comparable from the Soviet Union.” Weinthal was swiftly apprised of the grandeur of Russian literature, and, wanting to know more, began studying Russian shortly afterward. “The Soviet Union was the Cold War, it was nuclear bombs and air raids,” she says, “but it was also Pushkin and Akhmatova.”

The desire to truly know a subject, to consider all sides, and to utilize that knowledge to pragmatically solve problems in creative ways is a theme threaded throughout Weinthal’s work. One of her current areas of research, conducted in cooperation with the United Nations Environmental Programme and the Environmental Law Institute, seeks to understand war’s impact on water resources and to determine how water management can serve as a platform for political reconciliation, the fostering of regional cooperation, and the building of trust and confidence among previously warring parties. A project to facilitate dialogue on sharing water resources in the Middle East is one example. “I don’t study environmental resources just from the standpoint of pure preservation and conservation,” she says, “Everything I do is embedded within a social and political context. I can’t study the environment in isolation from the political economy in which decisions are made about its use.”

“Water is unique among resources in that it is essential for sustaining human life, and there are no substitutes,” Weinthal says. “But, as with other natural resources, water is shared, and so there is a sense of physical interdependence.” She notes that the intrinsic physical properties of shared resources present a ripe opportunity upon which trust and confidence, and potentially peace, can be built. “You can harness this cooperative dimension and bring about benefits for both parties, including reconnecting adversaries after a conflict.”   Engagement can take place both directly between government entities or between non-governmental organizations that share the same interest in protecting and sustainably using the resource.

Although natural resources serve well as a neutral terrain upon which to build consensus, over-relying on the environment as the lever to solve problems is a mistake, Weinthal says. One example is the tendency to frame economic and social problems in less developed countries as largely issues of climate change. “We start putting the climate label where it should not be—we call people ‘climate refugees’ when often it’s a matter of poverty and conflict-based displacement instead,” she says.  “We need to keep in mind the old-fashioned issues of development—of social justice and of economic development – as we identify new forms of environmental vulnerability stemming from issues like climate change.”

A constant reevalution of what is known and a commitment to build new knowledge from the result underlies Weinthal’s research. “That moment in high school is still with me,” she says. “It reminds me to never suppose that I know it all. We must always question our assumptions.”

Erika Weinthal is Associate Professor of Environmental Policy at the Nicholas School of the Environment at Duke University. The Good Questions series is an ongoing publication project of the Kenan Institute for Ethics that allows faculty and students to frame their work through the lens of ethics.