How are the U.S. immigration system, the decline of rural America, and food justice connected?

Often absent from the fiery national debate around immigration is our reliance on immigrant labor for food production. All Americans in fact “consume” the U.S. immigration system every day. It is on our dinner plates, if we can learn to see it.

My wife and I farmed organically for 9 years. As I labored to provide produce and meats to our enlightened clientele at farmers’ markets, I could not forget that just down the road were undeniable signs of our food system’s reliance on a permanent underclass of exploited people. Even as mainstream agriculture reaped profits, family farmers I knew were unable to make ends meet. The hog and poultry industries of North Carolina worsened the problem. As corporate meat prices became cheaper, I realized this was in part due to a growing population of rural people from Mexico and Central America coming here to work for factory farms. Even as I supplied niche markets in Chapel Hill and Durham, huge numbers of immigrants were moving to towns nearby to labor inside meat factories and produce fields, becoming part of a growing population of international food and farm workers often invisible to consumers. 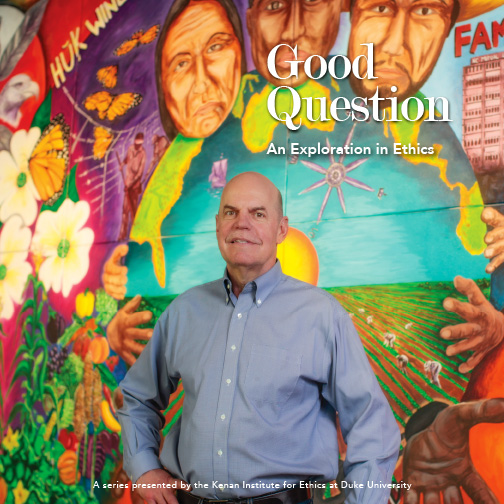 The two worlds of “local” and “international” collided one day when I desperately sought part-time help on my farm. Five men from the state of Nayarit, Mexico arrived in my driveway, said they wanted work, and changed my life. What really floored me was to understand that these men were farmers who had left their own land in order to come to North Carolina and work in the godawful processing plant just down the road. They had left their own sunny corn and tobacco fields to work in a windowless, frigid room, forced to stand in blood and icy water, eviscerating factory birds all day. With their arrival to my farm, the dynamics of the international labor movement of people and products now affected me. Though I was selling what I called “local produce,” it was now produce harvested in part by people who had traveled thousands of miles to find work. They had no citizenship papers when they arrived. Though I paid them a living wage per hour – much more than they continued to make in their hours at the poultry plant – I was the one benefitting most from their hours. Above all, I learned from these men about the global politics of food. They taught me about how borders are tied to eating, even for the enlightened consumers who care deeply about food origins.

Above all, they taught me about the human suffering that remains hidden in our food. We have done a fair job of highlighting periodically the plight of the so-called independent farmer in the United States. So much so that consumers may even think that if they can just buy “organic” and “local,” they may help remedy the food problem. I once agreed wholeheartedly that buying local and organic was the answer, but then I started asking what’s in the shadows of the food system I don’t see? Those questions helped send me back to graduate school to find out.

Since I left farming, food has further globalized. Several of those big North Carolina hog corporations that we worried about in the 1980s, like Murphy and Smithfield, are now owned by Chinese companies. In other words, American farms have been colonized by international corporations. The international plight of people crossing borders shows that the flight of rural people is part of the same takeover. People arriving at the southern U.S. border looking for work are typically from communities that have lost their local economic stability. Forces of agricultural consolidation continue marching across the globe, displacing millions of people. For the time being, Americans eat well because immigrants who are skilled at producing food strive to come here and work in our worst jobs. As long as they continue to arrive here with farming skills, and are willing to labor in factory farms for low wages, we benefit whether we like it or not.

Making informed personal choices about food is only part of the answer. We need national policies that address root causes of rural displacement — both in Central America and in Central North Carolina. We cannot separate places and people and work conditions from the nutrients we take in. Working toward food justice must include identifying our reliance on immigrants as an essential ingredient in the food on our plates.

Charles D. Thompson, Jr.
Senior Fellow at the Kenan Institute for Ethics
Professor of the Practice of Cultural Anthropology
and Documentary Studies

Thompson began researching food and agriculture in college. Growing up in Appalachia, a place where too many rural people – ostensibly people living close to land – have lacked good nutrition for generations, made him question our food system’s ability to provide adequately for its people and was drawn to help remedy the problem.

“I had many extended family members – my paternal grandparents among them – who were farmers. When I was in my 20s, I started working with farmers experiencing bankruptcy and foreclosure at the height of the 1980s Farm Crisis. As a way of fighting agricultural decline, I decided to provide an alternative by fighting for a farm loan for myself, thinking that by going small and local, I could fight the trend toward ‘getting big or getting out.’”

Thompson credits his stints as a community organizer and farming with forming the “deep questions” that took him back to academia. Thompson and his wife sold their farm and moved to Chapel Hill, where he earned his PhD in cultural anthropology and religious studies. In 2000, he became the Education Director at the Center for Documentary Studies at Duke, where he teaches about farm work, immigration, and the politics of food. Thompson is also appointed as Professor of the Practice in Cultural Anthropology. His methodology includes oral history, ethnographic writing, documentary filmmaking, and collaborative community activism. He has written extensively about the politics of food, and he is an advisory board member of Student Action with Farmworkers, the Duke Campus Farm, and other local food and agriculture initiatives.

“By highlighting immigration, through writing and filmmaking I endeavor to create conversations across borders – to amplify the voices of farmworkers and others whose lives are too often silenced. I hope to influence people to stop for a moment as they gaze at the dinner on their plates – perhaps in prayer or contemplation, as we sometimes do – and ask how many borders this food crossed to get to us. Whose story is contained in this food that I’m about to consume, and at what cost? Then what? We must use our food’s sustenance to do something to change agricultural policy. Caring about the food on our plates is a great start, but we can’t stop there.”