Q: Who counts as a refugee?

In 1948, my then-fourteen-year-old grandfather, two great-uncles, and great-grandfather fled their home in Shandong province to escape persecution by the Communist army. They left other family members behind, including my great-grandmother, whom my grandfather never saw or spoke to again, and followed the retreating Nationalist army. After a year of war and famine, they ended up in Taiwan, where instead of settling in the military dependents’ villages in Taipei, they moved to the countryside.

Sixty-four years—two generations—later, it suddenly struck me that these family members were wartime refugees. Perhaps that fact never registered because my grandfather never told me about his home province, where his family owned land, or his path to Taiwan. Perhaps it was just hard for me to classify my grandfather using the term refugee. 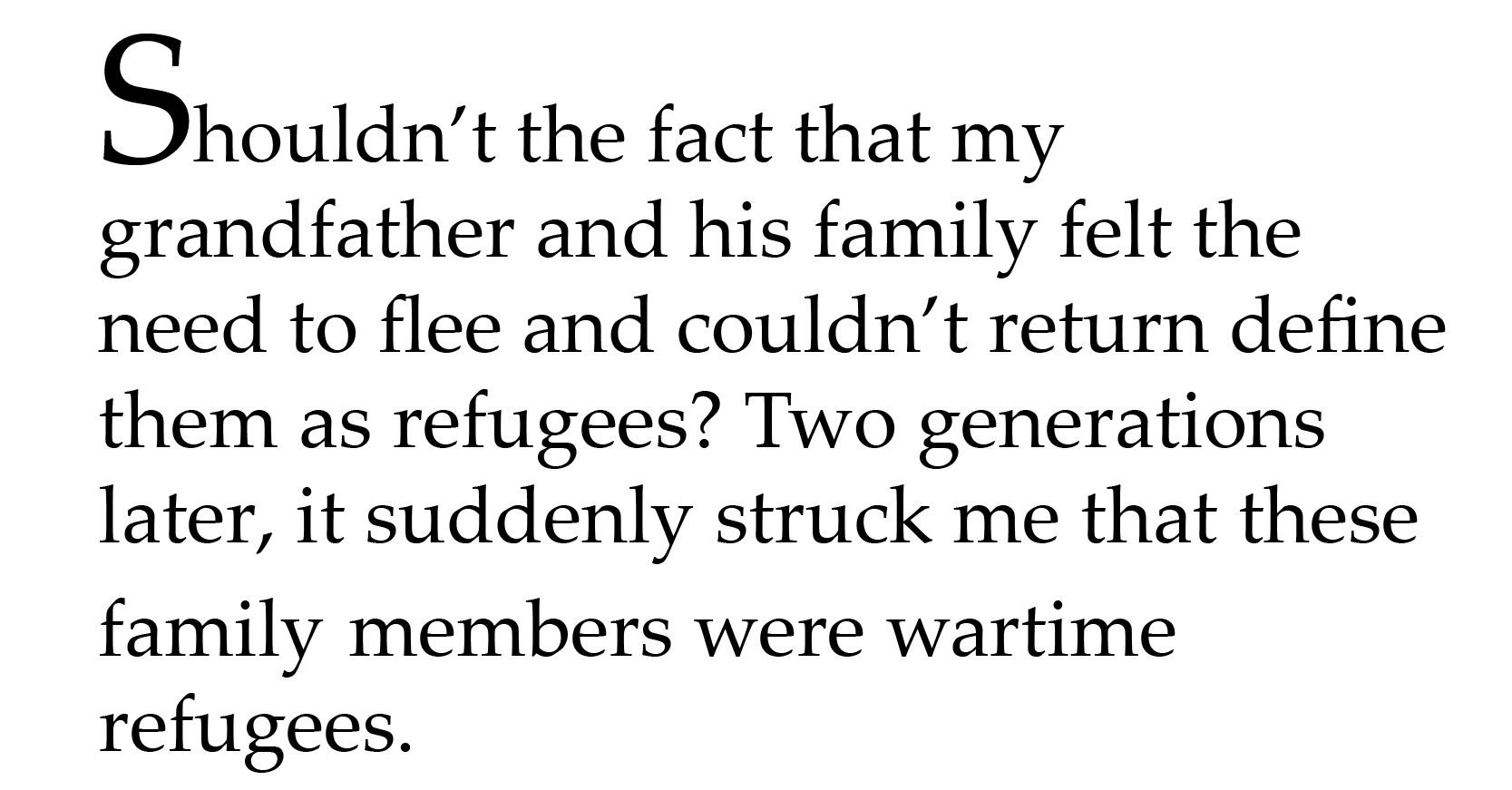 By today’s standards, my grandfather wouldn’t count as a refugee. He didn’t seek status from U.N. High Commission on Refugees, which didn’t exist at the time. And he didn’t technically cross an international border. He wasn’t “government-less,” because the government moved with him, and though he was part of a disfavored social group, it’s unclear whether or not he was in real danger or if the Communist Party would have simply stripped his family of their land.

My family would probably count as internally displaced persons, a distinction that means fewer rights and no mandatory obligations from UNHCR. That doesn’t seem right to me. The government fled with my grandfather, but to an island that had just emerged from a half-century Japanese rule just four years earlier. They suffered harsh conditions following the army. And shouldn’t the fact that my grandfather and his family felt the need to flee and couldn’t return define them as refugees?

My family had an easier time with resettlement than most refugees do. Cultural and language similarities helped. But tension existed between the original Taiwanese residents, who had lost their connection to the mainland, and the newcomers. My father told me that even as someone who was born and raised in Taiwan, some of his classmates still ridiculed him for being different. When he started dating my mother in the 1980s, her family disapproved of him being an “other province person.” Even today, the two main political parties can trace their differences to the tensions that originated when two million Mainlanders moved to Taiwan.

To make ends meet, my great uncle opened a small grocery store to support the family and my grandfather enrolled in a free teacher-training high school—after decades of Japanese rule, Mandarin-speaking teachers were in short supply. He eventually founded and became principal of a rural elementary school.  The grocery store was still in business when I was living in Taiwan when I was little.  I remember getting lots of candies from my “funny-speaking” great-uncle. The story behind his mainland accent never occurred to me. The implications of that story—and the ethical questions about refugee rights and resettlement—will stay with me for quite some time.

It took pondering what to write about in this Good Question for Chad Liu to figure out that his grandfather and great-grandfather could be considered refugees.

Liu, who was born in Alabama, lived in Taiwan for ten years, and then moved back to Alabama when he was 13, knew that his great-grandfather, grandfather, and great uncles left home to follow the retreating Nationalist Army from Shandong province to Taiwan in the late 1940s. But even after attending a three day undergraduate conference on refugee issues, Liu hadn’t yet thought of his family members as refugees.

Liu considers the ethics of everything—killing animals (pet hamsters, specifically), student athletics, college sex, and incentives—in his posts for the Devil’s Dilemma, Team Kenan’s news blog that goes beyond headlines to strange and surprising stories that are rich with ethical implications. In posts that tackle subjects from the humorous to the truly bizarre, Liu has one overarching goal: to make his readers consider issues from more than one angle.

And now he’s considering multiple angles on his family’s story.

“I grew up in Taiwan, but I didn’t really know the history or fully understand my family story,” Liu remarked. “I knew that my great-uncle, who ran a grocery store in the countryside, spoke with a funny accent. I now know why.

“I’m also beginning to understand just how unsettled my family felt living in Taiwan. My father was made fun of for being different. My mother learned to throw grenades as part of civil defense training, and my father served in the Air Force. They lived in fear.”

Liu’s interest in ethics began with Project Change, a pre-orientation program run by the Kenan Institute for Ethics and Duke Women’s Center, an option he chose over a research opportunity in engineering, his major area of study. Working with 30 other freshman on a project to benefit a substance abuse recovery center in Durham, Liu got hooked on ethics.

He became involved with Team Kenan, a group of undergraduates that creates programming and publications for other undergraduates—and the broader public. He then spent a summer in Ireland through DukeEngage Dublin, working with migrants at a social inclusion camp for African children. A junior at the time of publication, Liu plans to spend the rest of his time at Duke on a research project involving the mathematical modeling of tumor cell response to cancer-fighting drugs, and is considering applying to graduate programs in biomedical engineering.