Q. How can math be used to keep us healthy and safe?

We have all sorts of data at our fingertips – on healthcare trials and treatments, crime statistics, and weather patterns for example. But how do we use the data to make the best and most ethical decisions? Mathematical modeling can be used to help us understand a problem in a new way. It can be used to make predictions on what clinical trials to run, where crime will happen, or when catastrophic storms might hit. We can use predictive modeling to help decide where to focus resources in ways that benefit individuals as well as society as a whole.

One application for mathematical modeling is to better understand how our bodies function and how we respond to drug treatments.  In order to treat systemic illnesses, such as diabetes or hypertension, you have to take into account what effects a pharmaceutical might have on all parts of our bodies. A new drug can be created using one of many possible combinations of chemicals, and if you created a test for every possibility, it would take tremendous money and time and place trial patients or experimental animals at greater risk. Mathematical modeling can be used to run different combinations to predict side effects and to identify which scenarios are the safest and most promising. Simulations can be done quickly, cheaply, and with no risk to patients or animals. Then, fo 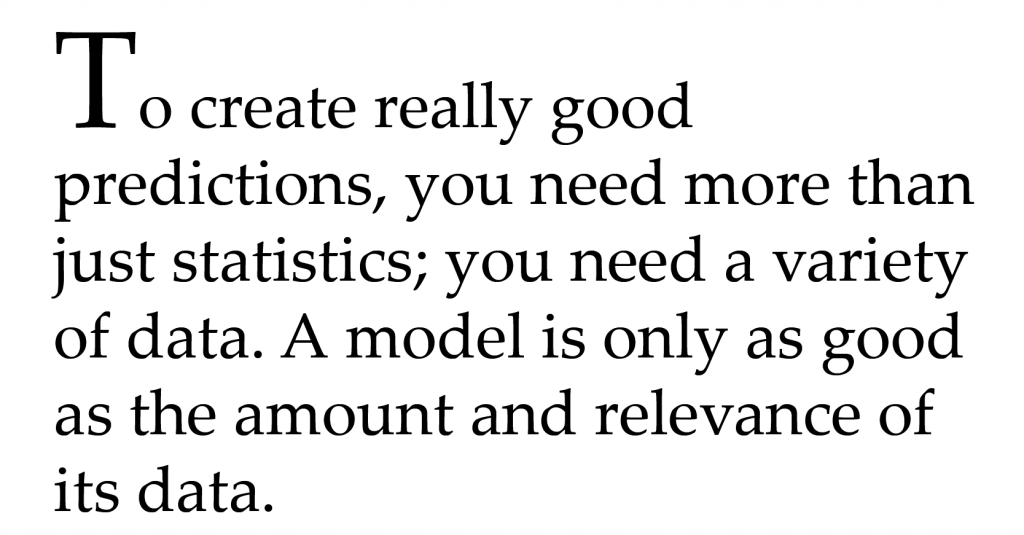 cusing clinical trials on the combinations most likely to succeed reduces costs and speeds up the process, enabling better treatments to be found more quickly and successfully.

This predictive tool can be applied in many medical situations. A researcher may be studying mice in order to better understand a disease. If a certain protein, say, has been identified in association with the problem and is then removed from the mouse, it’s hard to measure the effects. The mouse may quickly die or adapt in an unexpected way. It may not be clear what the protein’s function was by looking at the effects. But with modeling, you can link options and variables together in a much more precise way.

Mathematical modeling can also be used to predict behavior. Data can identify past criminal behavior. Sorting the data set and then running it through a mathematical model can help predict what sorts of crimes are most likely to happen and where. One of the most common types of criminal activity is residential theft. There is a phenomenon called the “broken window affect:” it describes the tendency of thieves to target areas where they’ve previously been successful, where they already know the escape routes, where they’ve identified a lack of security, or where they think the potential for finding valuables is high. With the results of the predictive modeling, police can concentrate their efforts on areas where they are able to do the most good. To create really good predictions, you need more than just statistics; you need data collected through methods such as surveillance cameras and social media. A model is only as good as the amount and relevance of its data.

Professor Anita Layton was encouraged early on to pursue math as a career.  While her father was the head of her Hong Kong secondary school’s math department, she was interested in forging her own path. When she enrolled at Duke University as an undergraduate, she intended to study physics. With a growing interest in theory and calculations and equally growing disinterest in conducting physical experiments, she eventually chose to major in computer science. During the course of her PhD research into weather prediction, she realized that while she had avoided focusing on math as a discipline, it had come to form the basis for her work. Still, having the training in multiple fields proved extremely useful.

“Interdisciplinary research often requires more time, effort, and money, and it may even have a higher risk of failure,” Layton notes. “But the rewards can be huge, in terms of advancing the knowledge base and contributing to the solution of complex societal problems.” For her research on the modeling of biology and medicine, she has also had to learn more about biology and chemistry. She says that a goal of college curricula should be to encourage students to explore knowledge outside of their disciplines and lead them to new places of learning and understanding.

When Layton joined the faculty of Duke’s Department of Mathematics, she was the sole tenure-track woman. While she has since been joined by a few female colleagues, there is a sizable gender gap in the field as a whole. Layton ascribes this in part to a lack of role models and also to the way in which the educational system is lacking in rigorous math and science across the board.

“We need more children welcoming the idea of women and minorities in STEM fields, but it’s also hard for children to see the possibilities without examples. Female students account for only 20% of Duke’s math majors. Men dominate our graduate school applicants. When your female and minority applicant pools for graduate training or faculty positions are so small, how can you increase their percentage?”

Together with her colleagues, Layton has created a mentoring program pairing younger and older female math students. The program hosts social outings and sponsors student participation at math conferences. Through this, she hopes that the students will feel less isolated and will reach out to peers who understand their experience. She identified that in American culture, there is still something of a stigma for having a talent for math and a tendency to distrust math and science.

In addition to her current research on modeling biology and medicine, Layton has been a leader on a Bass Connections project using modeling and simulations that brought together faculty from an array of disciplines, including literature, environmental studies, and physics. The undergraduates involved in the project collected Durham crime data to run predictive mathematical models, and she hopes that another project can compare the actual results with their predictions.

Anita T. Layton is the Robert R. and Katherine B. Penn Associate Professor of Mathematics at Duke University. The Good Questions series is an ongoing publication project of the Kenan Institute for Ethics that allows faculty and students to frame their work through the lens of ethics. Photography by Brian Mullins.