Question: How do we meet students’ eagerness for ethical leadership? 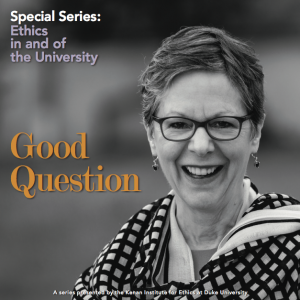 First I ask students, “What is the work of leadership?” If we can move beyond seeing leadership as a position and examine it as an activity, we can get somewhere. Our task is to take a word that has lost its meaning, and build a definition that matches the real work we face in the world. What about ethical leadership? Leadership requires a willingness to help people take on thorny problems that defy easy answers, and it also requires a sense of purpose, and knowledge and skills to embrace those tasks. Students show a hunger for this work, an interest in dealing with conflict productively and addressing issues that might keep a community, a company—or a country—from confronting its toughest problems.

So how do we teach these skills? There is a framework for analyzing problems within complex, dynamic systems that Harvard’s Ronald Heifetz has developed for three decades. It’s called adaptive leadership. It has long been a staple for policy schools and businesses, but few universities have incorporated it into their undergraduate curricula. Some say students lack the professional experience and grounding that make the training relevant, such as being able to hold a group with diverse perspectives in a difficult conversation, building trust for deeper dialogue, and analyzing complicated, long term problems.

When I came to Duke, I brought the adaptive leadership pedagogy with me, and found an immediate resonance for it with students. Few undergraduates have had extensive personal or professional experiences of group conflict. But they know how pervasive such conflicts are, and they are ready to learn. So I choose documentary films and books that shed light on current political issues, shaped by compelling stories about specific people and contexts. Students use these case studies to analyze adaptive problems on a systems-level, and then present their work to their peers.

Students are fascinated by questioning, risk-taking, and being alive in the moment with real people in real time. This kind of leadership requires that we grapple with our own values, and in the process we may realize it is time to adjust our perspectives and problem-solving strategies if our way of doing business no longer fits the conditions we face and is ineffective. Adaptive work requires that we be creative, experimental, and improvisational, and that we be strategically savvy about the effects of our interventions.

While students are more than willing to meet the challenge of adaptive work, they face constant and increasing pressure to be connected through technology and social media. This state of distraction is at odds with the ability to think deeply and critically. Adaptive leadership takes concentration, and it goes hand in hand with what we call “balcony-dance floor work,” the practice of reflection-in-action. I ask students to be militant about creating reflective space, and to be the owners of their time and attention. Distraction is a product of our culture, not a problem of students’ abilities, but it is a beast. Helping students to see the value of deep work has refined my teaching.

Alma G. Blount, Director of the Hart Leadership Program in the Sanford School of Public Policy 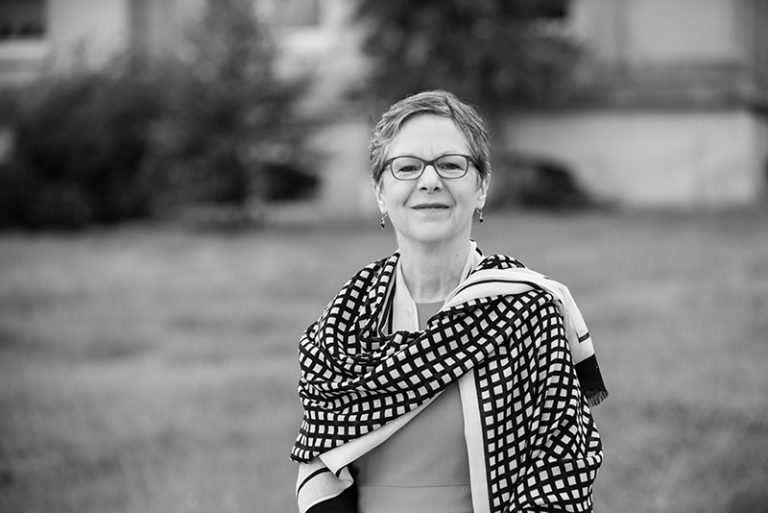 Alma Blount never would have imagined that she would become a professor and teach for more than 20 years. Raised in Western North Carolina, she learned frugality, self-reliance, and a commitment to the value of education and ideas from her family. They shared many vivid stories about her North Carolina ancestors, from which she developed an early interest in politics and political engagement. Blount financed her own undergraduate degree at the University of North Carolina at Chapel Hill before embarking on a career in human rights work and photojournalism. Her journey led to work with international, faith-based organizations in Nicaragua and El Salvador.

Blount was passionate about her work, but it became all consuming, and it grew harder for her to see what she was accomplishing. In 1989, she reached a turning point. Already feeling burnt out after having lost many friends and allies during the counterrevolutionary war in Nicaragua and the civil war in El Salvador, she was devastated by the murder of six Jesuit priests and their housekeepers by Salvadoran security forces. She began to question her work and her calling, and she realized that she needed a break.

“With the kind of work I was doing, if you are always on the dance floor, you don’t have the energy to examine the larger issues at play. Sometimes you need to go up to the balcony and see the bigger picture.”

Blount entered the Masters of Divinity program at Harvard University. She was enticed by a full scholarship and the ability to take courses at the Kennedy School of Government through a program about Religion and Public Life. She fully intended to use the experience as a time to regroup before heading back into the trenches of human rights work and political organizing. A second pivotal event occurred almost immediately: after arriving at the Kennedy School, she met Ronald Heifetz. She managed to get a spot in his wildly popular leadership class, and it helped her discover that she needed to retool everything, from the personal to the professional. Using adaptive analysis to examine her own professional experiences allowed her to gain new insights about her leadership skills, and it also gave her a sense of healing.

Blount then joined the teaching team for Heifetz’s course, and during that time reconnected with an old friend who had become a mid-career student at the Kennedy School. Her friend had been part of Duke’s nascent Hart Leadership Program, and she thought Blount might be a good fit.

Blount has taught at Duke since 1994, and has served as director of the Hart Leadership Program since 2001. She is a Senior Lecturer in Public Policy at Sanford School of Public Policy.

“I never thought I’d be at Duke, but it made perfect sense from day one,” she said. “I came in thinking, ‘if this works, great; if not, I’ll move on.’ But my teaching and relationships with students have continued to build and grow in very satisfying ways.”