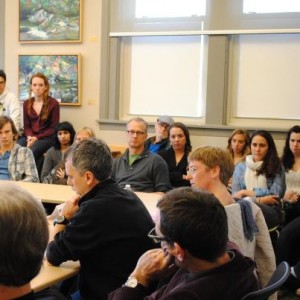 We are wrapping up a hectic week at Kenan! One of the highlights was a packed house for Will Kymlicka and Sue Donaldson’s talk about their book Zoopolis, which uses political theory models of citizenship to examine the obligations human societies have to animals.

I was able to hear Kymlicka in a smaller group setting for a lunch seminar on the concept of multiculturalism.  He was specifically explaining his work on a Multiculturalism Policy Index, which monitors multiculturalism policies in many Western democracies, and shows their evolution over time.  There is a widespread perception that the past decade has brought backlash to immigrant multiculturalism policies, but his index shows that this is actually not the case. As is often the case, the way we use language is key.  Many countries have backed away from using the word “multiculturalism,” but the same policies remain. But what else is going on in the current debate?

Kymlicka also discussed the development of civic integration policies, which include language and citizenship classes, as well as tests at various stages.  It may seem that civic integration policies would be antagonistic to multiculturalism, but he categorized the situations in which they can be compatible. Does the nature of the national identity in which immigrants are being asked to integrate require them to diminish their attachment to their old identity, or does the integration process allow for additive identities? Is the burden of civic integration requirements on the immigrants themselves?  Sometimes the requirements may be mandatory, but the immigrants are expected to pay for them.  Other times states may accommodate the process more readily, and help cover the costs.

The best possible scenario, in Kymlicka’s mind, is an “enabling citizenship regime.” This model includes robust multiculturalism policies (such as the eight he measures in the Multiculturalism Policy Index), and at the same time inclusive civic integration policies. This is certainly an important concept to consider in today’s global society. I’ve just given a quick overview of an interesting lunch conversation, but check out Kymlicka’s work and the policy index for more!